Fencing at the 2009 Brock Open

Yesterday was the 2009 Brock Open in St Catharines. In past years, it was run as an Open Challenge (OCC) which does not allow "A" fencers or those who are rated as High Performance or who fence internationally. Being an open allows this level of fencers to compete.

Last week I fenced very poorly and had been working out some issues this week at practice. Now to see if there was any improvement ...

My first match I won 5-1 against someone in their first year. My footwork seemed good, not great, but much better than last week. My second match I was up 4-1 and decide to change tactics. That caused him to get 2 points against me, plus I made one of last week's mistakes by jumping at the start instead of making a quick step forward, causing another lost point. I lost that match a heartbreaking 5-4.

I keep notes during a tournament to reinforce what I need to remember. After that bout, I scrawled, "KEEP DOING WHAT WORKS!!!"

My last match of the poole I was up 4-3 but lost again a heartbreaking 5-4. I was 2 wins and 4 losses in the poole, ranked 31 out of 50 fencers. Could have been ranked so much better if I had turned those 2 close losses to wins. I feel I am good enough to have won 4 matches in this group and maybe even 5 out of 6.

My friend, Chacho, had watched my last match in the poole and pointed out something I was doing wrong in my attacks by keeping my hand back. 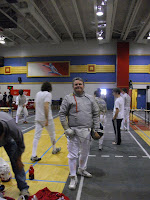 In my first DE (direct elimination) match, I was down 8-6 at the break. The judge kept indicating that my hand was back on the attack so I went over and asked him about it as I was losing points I should have been getting. He explained that I was holding my arm out but my blade back so was not attacking.

A simple problem to fix, which I did and it turned my day around. My opponent only managed 4 points in the second half with my beating him 15-12. I was now feeling better but was up against Kyle who finished ranked second in the pooles and is ranked 8th in all of Canada. Although I fenced well and scored some good touches, he eliminated me 15-5.

No shame to me losing big to a fencer of this calibre. In fact, I liked the way I fenced against him and the second half of my first DE. My footwork was good again, my bladework was good and, most importantly, I felt in control.

I ended the day 31st in a field of 50 but consider it a successful day. I came into it a fencer with some confidence problems and fundamental issues, and finished the day with my problems worked out, in control and, most importantly, full of confidence.

Good thing too as next Saturday is the Nationals in Ottawa and I will need to be on top of my game.
Posted by Swordsman at 09:08