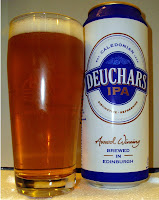 This week I picked up an IPA from Scotland made by Caledonian Brewing called Deuchars IPA, located in Edinburgh.

How do you pronounce their name? From their website they explain ... "If you're from outside Scotland, the pronunciation of Deuchars IPA may not come naturally, naturally. So to help you out, the advertising slogan 'You're due a Deuchars' has been developed."

The brewery was built in 1869. At that time, there were over 40 breweries in Edinburgh. In

1919, the brewery changed hands becoming Vaux Breweries. The brewery decided it wanted to move to Sunderland but a management takeover resulted in the brewery remaining open to brew cask conditioned beers. So the brewery remained in the same old Victorian building (pictured right), using the last direct fired copper coppers in the UK (pictured down to the right) and is the last brewery of the 40 remaining in Edinburgh.

"There's nothing quite like watching the only direct-fired open coppers at work. The Victorian design still effective today as the hand beaten inner dome concentrates the heat and develops a constant churn and roll."

Deuchars IPA is shipped to Sweden, Denmark, France, Canada, the USA and Hong Kong and has won quite a few awards since 2000, the last being Silver in the 2007 Society of Independent Brewers Association (SIBA), National Beer Competition in the Champion Bitters category.

An IPA is a hoppier ale, made to survive the long trek when being shipped from England to India. The extra hops are added as a natural preservative for the ale, and allows the taste to survive the long voyage. Scotland, in my mind anyways, is not know for hoppy beers so this should be interesting!

The ale pours a deep amber or light coppery colour. A head does form but disappears with no lacings left on the side of the glass.

I was surprised when I sipped it as it started sweet and then finished with a slight bitterness. It is a pleasant quaffable beer that would go down well on a hot afternoon. It is not one that I would go out of my way to have but if I was at a pub that served it up, I would certainly order a pint.
Posted by Swordsman at 15:01