Fencing at the Newmarket OCC

Sunday was the Newmarket OCC (Open Challenge Circuit) and I was entered into two events ... Senior Men's Sabre (all ages) and Mixed Veterans Sabre (over 40). The vets' sabre was to follow the Seniors but instead the four Vet Poole matches followed right after the eight poole matches for the senior event. It was tiring but with so much fencing ... loads of fun!

I fenced very poorly for most of the senior event and should have done much better. I only won one out of my seven matches, whereas on a normal day I could/should be at least 5-3 or better. My friend, Sara, said I was being much too fancy for my own good and to get back to basics. My coach, Nik, also had a long talk with me on

what else I need to correct. I adjusted my game and even though I lost the last two matches, I fought hard and lost close.

I'm glad I made the changes as I fenced much better and more controlled in the Vet event, winning three out four matches. My loss in the poole was against my friend and former clubmate, Bob, losing to him for the first time ever. Unfortunately for me, he was right on his game and crafty to the extreme.

Then it was off to the elimination round for the senior event. I was off for the first half as was 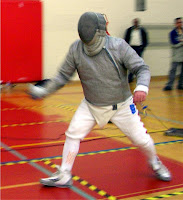 down 8-2 at the break. Nik pointed out a couple of areas I could take advantage of and even though I ended up losing fenced extremely well in the second half of the match, coming back to lose 15-11 and ended up 22nd for the tournament.

Next up was the Vets Gold medal match and it was against Bob, a very different Bob than I am used to fencing against. The match was a tough, hard fought one and it was Bob's day. He fenced a very well deserved 10-8 victory, leaving me with the Silver. Sara earned the bronze. The three of us are pictured above. To the right, the medalists from all the three sabre events.

At last night's practice at Bladeworks, it was working on the basics, which I'll work on again Wednesday night. Then hopefully Saturday at the Brock Open in St Catharines, I'll be able to Raise a Little Hell!

For more information on fencing in Ontario, click here.

An improper way to attack. Why am I in the air? Feet should be on the ground! 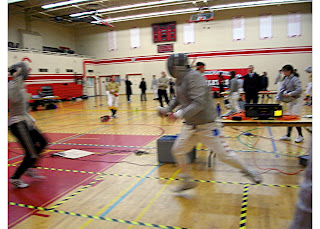 A proper attack against Bob resulting in a point. Notice my green light on! 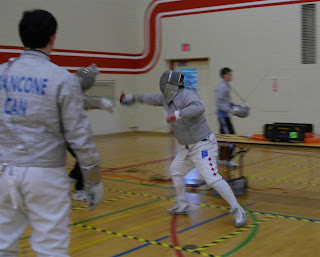 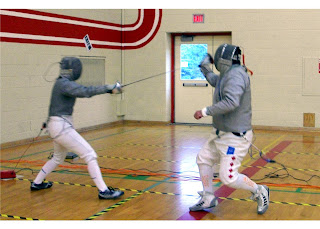