Over at The Bar Towel, I always hear lots of great things about this brewery from the beer geeks. As it is located in Vankleek Hill, a town in the Ottawa, their beers are not available in my area. Since I was in Ottawa to fence at the Nationals, I hit an LCBO and there it was. 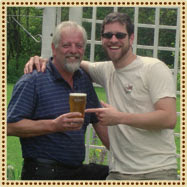 The bottle itself is something to behold. It is a 750 ml stoneware crock bottle with a swing top stopper. There was no decision on whether to pick this up or not.

Beaus All Natural Brewing is a father and son operation which opened in 2006. Tim, the father, was forced to close down his textile company when clients took their business out of the country and the son, Steve, left a government job to open the brewery.

Lug Tread has become very popular because of the beer and the bottles. The bottles come from Germany and are labeled locally. A problem for the brewery is The Beer Store will give customers their 20 cents for the bottle but will not give the bottle back to the brewery. Steve explained in an article ... "Instead of letting us pick up the bottles, which would cost them nothing, and we'd pay them extra to do, they collect them all, ship them to

Toronto and crush them into dust at great expense."

So the brewery decided to find a way to get their bottles back and help the community. So they have hired homeless youths through Operation Go Home to man four depots where customers can go one Saturday a month to drop off their bottles. Beaus donates 40 cents of every bottle returned to the charity and asks customers to also donate their 20 cents. So far, the program has graduated six people into full time jobs elsewhere.

I have to applaud Beau's for setting up such a helpful program that benefits them and the community.

Lug Tread is a lagered ale. Ale usually goes through a short fermentation period where the ale yeast works best at 65 to 75 degrees Fahrenheit and is out the door in a couple of weeks. 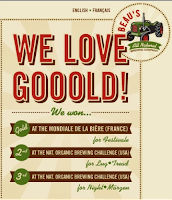 Lagering is the process of aging the beer at a lower temperature over a longer period of time.

And how is Beau's Lug Tread?

It pours crisp clear yellow in colour, with a nice head which lasted. The beer is more sour than bitter and the sourness lasts through the finish. It reminded me more of a pilsner than an ale and that is not a bad thing.

I enjoyed this beer and am looking to fill up my glass from the fancy bottle which will go on display on the desk in our backroom as we are too far away to participate in deposit days.
Posted by Swordsman at 17:43