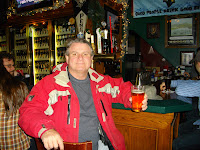 Except for a snowstorm between Niagara Falls and Fort Erie, it was a pleasant trip.

Pittsburgh is a picturesque city set on the junction of three rivers. Hills surround the downtown area and, of course, there are bridges everywhere.

Even though I am fencing today, I wanted to check out the nightlife in the downtown area.

East Carson is the hot spot of town know simply as the South Side. Bars and pubs line both sides of the street. Where people in Toronto like to go out late, the South Side was jumping and in full gear by 8:30. 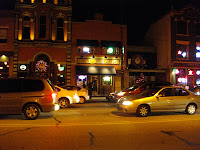 I had to be good and not do the South Side crawl. That's where you walk down one side of East Carson stopping for a drink in each pub, then crawl back along the other side again hitting all the pubs. Instead I just had a pint at three places I had heard about.

I started off at Fatheads (pictured right ... a shot of the taps is to the left) which was jam packed and had a Fathead Czech Pils.

Next across the road was Pipers. It was full but not o

vercrowded. The bartender was a really nice guy, quite friendly and quick to offer samples. I had a "Big Hop Harvest Ale" from East End Brewing , which is a local Pittsburgh brewery. The beer had a nice hoppiness to it, which I quite enjoyed.

I finished off at Smokin Joes (pictured top left) with a beer from Bells Brewery in Michigan, Two Hearted Ale, a nice very hoppy beer.

Then it was a cab ride over the bridges and through the tunnels of Pittsburgh back to my room. I was back safely in my room by midnight. I had a sampling of Pittsburgh's downtown Friday night. Today it is down to business. My 50-59 Vets tournament is at 3:00 today.

The bottle selection at Smokin Joes ... 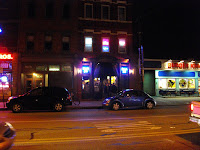