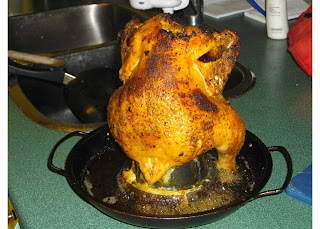 Teena is leaving on Sunday to head to Ottawa on business for a week. I wanted to have something special and different for supper. As we are going out tomorrow with friends for dinner at Granite Brewery, the dinner had to be tonight.

It struck me as I was walking home from work on Wednesday. We have not had Beer Can Chicken for quite some time. We have made it with various beers in the past and even ginger ale, so again, I wanted something different. Something favourable.

Then I remembered that 6 Mill Street Belgium Wit were sitting in our fridge. The beer is full of 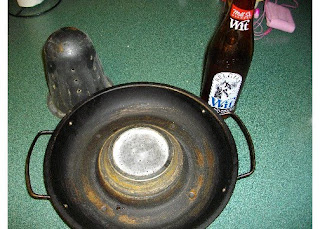 flavour and has a very nice taste of orange, or citrus, and coriander. Could be a nice flavouring for the chicken.

We have a stand with a built in reservoir to make this kind of chicken. The idea is to fill the reservoir with beer, place the chicken over the funnel which sits over the beer, and then season the chicken with the spice of your choice. My favourite spice for chicken is Irie Creole seasoning. In the outer area of the stand, I poured in water so the grease and juices from the chicken would not smoke up.

Then just throw it in the oven at 375F for about an hour and a half. It was Friday night and we had worked all day so it was a long hour and a 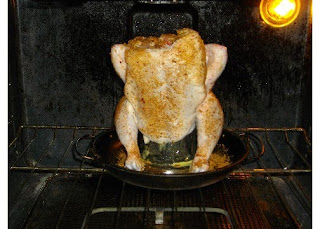 half. Cooking time is always relative to how hungry you are. I drank the rest of the bottle of the Belgium Wit while we waited.

And how did it turn out?

The beer bastes the inside of the bird creating a very moist, very tender feast. The chicken never takes on any strong flavouring from the beer but is nicely flavoured.

Did we enjoy it? We must have.

There are no leftovers. 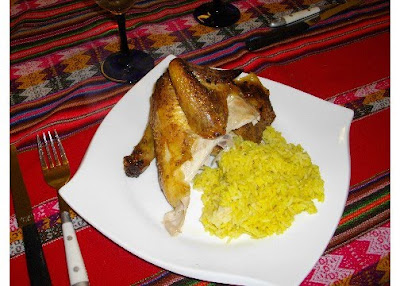 Lord of the Wings said...

I made beer can chicken last week too!!!

Yours has great colour and I love the description of your spice pairing and the beer. Looks mighty tasty!