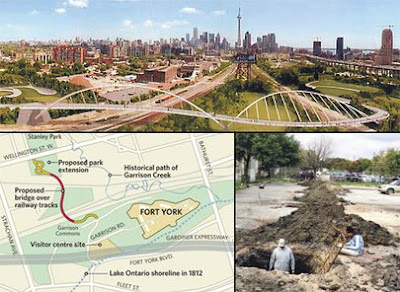 I saw this article in the Toronto Star. As I am very much in favour of not only preserving our past but showcasing it and have a huge interest in the war of 1812, I found this very interesting.

For years, Fort York has been separated from the harbour it once protected and the city it defended, hemmed in by the Gardiner Expressway and a rail corridor.

But construction of a new pedestrian-cyclist bridge over the railway tracks, which begins next year as part of a $35 million revitalization of the national historic site, will once again connect the fort with city neighbourhoods to the north and waterfront trails to the south.

"One of our biggest challenges over the years has been accessibility and the ability to have a good physical presence," says museum administrator David O'Hara. The bridge will link the northwest portion of the 18-hectare park to the south side of Wellington St. east of Strachan Ave.

Paths from the fort, built by Lieutenant-Governor John Graves Simcoe on the shores of Lake Ontario in 1793, once connected it to the Town of York – Toronto's birthplace and founded by Simcoe the same year.

Future plans call for a bike trail south of Front St. through existing parks, which will form an east-west link from the fort to downtown.

The $17 million trail will give the fort "the central role that it used to have," says deputy mayor Joe Pantalone, chair of the city's War of 1812 bicentennial steering committee.

The cash infusion also includes an $18 million visitor centre. The fort currently shows an orientation film, providing an overview of the site, and houses a gift shop in the historic buildings, which O'Hara considers poor use of the city's oldest surviving structures outside of a lighthouse on Toronto island.

The new centre means "100 per cent of the historic buildings will be accessible to the public," says O'Hara. Seven of the eight buildings in the walled fort date from between 1813 and 1816.

Designs for the visitor centre from five architectural teams, shortlisted from 31 submissions earlier this year, will be submitted to the city Dec. 3 and a winner will be chosen the next week by a jury of architects, artists and landscape architects. The public can view the designs during an open house Dec. 4, 5 and 6 in City Hall's members' lounge.

An archaeological dig is underway to determine what lies under the site of the future visitor centre. So far, excavations have uncovered the foundations of a 19th century house and an 1860s flagstone layer that is probably protecting the battlefield below, says O'Hara.

The completion of the bridge and visitor centre in June 2012 is timed to the bicentennial celebrations of the War of 1812, when the U.S. declared war and invaded Canada.

The U.S. army and navy attacked York less than a year later, razing the fort and burning down Upper Canada's parliament buildings. The British abandoned the town and fort but returned in the fall and began rebuilding the fort.

"We really want to see more people visiting the site ... we're talking about a fort with a battlefield and two cemeteries," says O'Hara. Simcoe's own daughter, 15 months old when she died, is buried in Victoria Memorial Square, a cemetery northeast of the fort. Eighteen grave markers, the only ones left from more than 400 original markers, are being restored and will be mounted in a wall on the site.

"This is where the Americans attacked York in 1813. So it's extremely significant and we're extremely fortunate to have it intact," he says. "I don't think Torontonians fully appreciate what we have here."
Posted by Teena in Toronto at 18:42