The Battle of Queenston Heights

Back on this date, October 13, 1812, a battle was fought, a great General killed, and an invasion repulsed, saving a nation. After the Plains of Abraham, this is the most important battle fought on Canadian soil

The United States had declared war on Britain earlier that summer and was poised to invade Canada. Having superior forces, they assumed that Thomas Jefferson was right when he said it would be "a mere matter of marching".

However, General Brock had moved fast and captured an American fort on Lake Huron, which took control of the fur trade. Then in a bloodless victory, he captured Detroit and all the armies of the Michigan frontier. For this, Brock received knighthood as Sir Issac Brock.

Desperate for a victory, the U.S. decided to invade at Queenston. At 4 AM, the bombardment started from Fort Niagara and the Americans started crossing the Niagara river. Brock had an organized defense along the Niagara River and the British forces and Canadian militia soon had the Americans pinned down on the beach.

The British had two cannons, making life miserable for the American crossing ... one north on 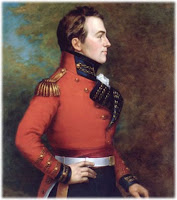 Vroomans Point and the other up in a redan on the Heights of Queenston. Brock, on his faithful steed Alfred, dashed from Fort George to the scene of the battle. Along the way, he met up with militia forces marching double time to join the battle. "Push on, brave York volunteers," he encouraged as he rode off.

Once at the battle, Brock positioned himself in the redan where he had a clear view of the battle below.

One of the Americans taking fire on the beach remembered an old fisherman's trail which lead up the rock face. Fifty men joined him in the climb. At the same time, Brock sent most of the forces he had at the gun placement in the redan, down into the battle to finally finish the battle. It was a bad luck move for Brock as the American forces then appeared behind the redan and stormed the gun.

With no forces to defend the position, Brock ordered the gun spiked so the Americans could not use it against them. Then they made their retreat down to the village.

Brock knew if the Americans succeeded in taking Queenston, Prevost, the head of the entire British army, would roll a retreat of all its forces as far back as Kingston or even Montreal. Queenston was the now the key to control of Upper Canada and whomever controlled the heights controlled Queenston.

Brock then rallied the forces of his beloved 49th, in the village, then stormed the hill. The 49th took on heavy fire from the U.S. forces now entrenched on the heights and started to retreat. An appalled Brock cried out, "This is the first time I have ever seen the 49th turn their backs!"

The cry rallied the 49th who turned and charged again. Brock took a musket ball in the wrist of his sword hand but pressed on. A sharpshooter then shot Brock directly in the chest killing him instantly. The 49th broke off the attack, carried off their dead commandeer back to the village.

Lieutenant-Colonel Macdonell, the next in command, rallied the forces and with the cry "avenge the general", the 49th again stormed the heights. In fierce action around the redan, the attack fell short, Macdonell was killed and the attack again beaten back.

General Sheaffe then arrived on the scene and directed the 300 Mohawk warriors under John Norton and John Brant to keep harassing the forces on the heights, which they did effectively. U.S. militia forces on the American side of the river hearing the native yells suddenly refused to cross, citing a rule that the militia could not be forced to fight off of U.S. soil.

Gathering a sizable force, Sheaffe did not storm the Heights but took a long looping march around to gradual incline. Once upon the Heights with native forces on his right, he attacked sending the American forces reeling back against the cliff face. It is said that some Americans leaped to their death, such was their fear of the native force which joined in the attack.

A white flag went up and the Americans surrendered. 6,000 started the day for the U.S. 300 were killed or wounded in the attack and 1000 captured.

British casualties were light in numbers and they had won the day but they had lost two great leaders in Macdonell and, of course, the irreplaceable Sir Issac Brock.

The remains of Brock and Macdonell rest in the base of the 56 metre (184 ft) Brock's monument in Queenston Heights park.

To read a person account of the battle from Lieutenant John Beverley Robinson of the 3rd Regiment of York Militia, click here.