While on Jersey Island, one of the things that I wanted to see most were the Jersey War Tunnels, also know as the German Underground Hospital. I never realized what a moving experience it would be.

In World War II, Churchill decided that Jersey Island held no strategic significance so left it undefended allowing it to be the only piece of British soil occupied during the war.

The Germans decided to make this island part of their "Atlantic Wall" defence system and added many gun batteries and search light stations throughout the island. They also built an extensive tunnel system to use as an ammunition storage area and barracks. After the D-day invasion by allied forces the Germans, expecting an attack any day, one that never did come, decided to use this as a main hospital area for the island.

The tunnels were built over four years by more than 5,000 slave labourers who were brought in from Russia, Poland, Spain and France. The labourers worked in horrid conditions were underfed and overworked. 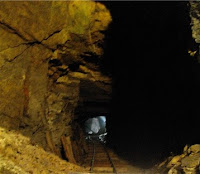 Many died during the building of the tunnels from malnutrition, disease or accidents caused by working in seriously dangerous conditions.

Over a kilometer of tunnels were completed by the end of the war and the unfinished areas sealed off once the Germans started fearing an invasion. Some of the unfinished tunnels are open to show visitors the horrid conditions the slaves had to work under.

The tunnels now feature a history of the occupation of Jersey called 'Captive Island'. Each corridor off the main tunnel shows a different year of the German occupation. It is a powerful exhibit.

To allow the visitor a real connection with the place, an authentic replica ID from a person of the occupation is given to each to each person. Your person may have been a collaborator, victim or a part of the resistance. You may or may not see your persons name come up as you do the tour but after the tunnels there is a remembrance wall to go and find that person.

My connection was through Clifford John Cohu, a Minister born December 20, 1883, and I will remember his story. He worked at a hospital on the island for the locals and had an illegal radio hidden away. On it, he would learn the news of the real war and would spread the news to the patients. He was either found out by the Germans or turned in by a collaborator and shipped off to a concentration camp in Europe. Here he was beaten daily and, although he remained strong in spirit, he eventually died of his beatings. The most surprising thing is that no books were allowed in concentration camps, yet when he died, they found a bible hidden in his shirt.

Five of us visited the tunnels and much of the conversation on the way back was about "our people". If ever in Jersey this should be very high on your places to visit. It is a very powerful, thought provoking, moving place. 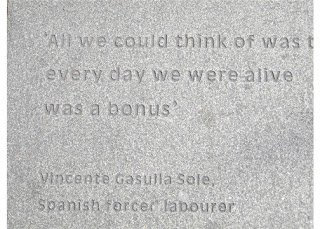