Last weekend, the 2009 Commonwealth Veteran Fencing Championships were held in St Helier on Jersey Island. More than 100 competitors came from 11 different countries. In my event, Men's Sabre, there were 30 entries from 10 different countries coming from as far away as New Zealand, Australia, and Singapore.

It was my second Commonwealth Championships. The first time I entered the event was held in Toronto so was not much of a trip for me. I had just completed my first competitive season and finished 14th out of 18. This year, I hoped for a better finish. 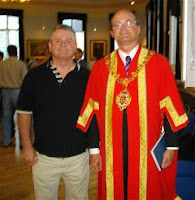 In the team events Canada won 2 medals, Silver for Men's Epee and Bronze for the womans Epee.

There was a competitor Meet 'n Greet at at City Hall presided over by Chief Constable Simon Cowcroft who gave an excellent speech. I couldn't resist going for photo op. Then we headed off to the Royal Yacht Club for an excellent buffet dinner.

On the Friday night, there was more than 20 of us for the Canadian team dinner at an Italian Restaurant called La Cantina. There were toasts ... my friend, Gaby, loves to toast. That is him in the picture with glass raised. Afterwards we posed for the team picture.

It was so great being involved in an event like this. Normally we only have one or two people cheering you on but, at an event like this, especially when you get to the eliminations, the team is there behind you cheering on every hit. It was an honour and privilege to be able to participate with such a fine group of people.

I fenced well in my event, finishing 15th out of 30. I was leading too in the quarter final match

over Duncan Rowlands from England but he overcame or I would have made it into the top 8. Not crying over spilled milk here as Duncan eliminated my friend Vince (Canadian) in the next round and went on to win Bronze. No shame in being knocked out by a medal winner.

Before the Bronze medal match, he walked by me, toweling himself off and said as he passed, "Geez, you Canadians are exhausting to fence!" I'll take praise like that any day.

I fenced on the Canadian Team in the Men's Team event and we lost in the Bronze medal round 39-45. So close.

It was a great day of fencing. Can't wait for the next one in two years time.
Posted by Swordsman at 23:10