It certainly was a full weekend!

Teena and I started by heading over to BMO field, about a 15 minute walk from home, to see the newest game in town, field lacrosse. In February, a group bought the team from Rochester which plays in the MLL (Major League Lacrosse) and brought them to Toronto, calling them the Toronto Nationals.

They had won their first two games of the season but we watched them be defeated 13-9 by the Long Island. It was a fun night even though there was a half hour delay near the end of the first half for lightning. It also poured rain but we endured 'til the end of the third quarter. We will definitely go again.


Here is Teena in the rain waiting out the rain delay. The beer helped.

We both were up early Saturday morning, Teena to do some work and me to head off to fencing practice. It's my first Saturday practice at Bladeworks Fencing. Usually I go Monday and Wednesday nights.
Here is a picture of my coach Nik and me at a recent competition. 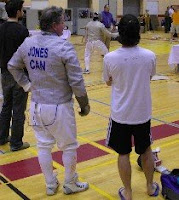 Sunday it was off to Stage West to see The Producers. Teena and I saw it with Sean Cullen when it was in Toronto a few years ago. Although we have not been impressed with the shows we have seen lately there, this was an excellent production, which I quite enjoyed.

Next week I am trying a full week of rising early to hit the gym before work. Should be interesting to see how that works out.
Posted by Swordsman at 22:13