I must admit that when it comes to new beer sometimes I will go for the look of the bottle. You don't need to tell me that "you can't judge a book by the cover" but when searching for a new beer that I haven't heard of ... why not?

The 750ml bottle impressed me, as did the label, and corks get me every time. Something about the cork that makes it seem like a very old brewery style beer. That's why this week I chose Unibroue's Maudite.

According to Canstock, Unibroue opened in 1990. Maudite was created in 1992. Unibroue was sold to Sleeman Breweries in 2004 which then sold it to Sapporo in 2006. The owners seem to have left this company alone to continue brewing the beer the way they did in the past.

Where does the name "Maudite come from?

According to their website, Maudite means damned. I did a free translation which came up with the meaning cursed.

In this case, the name recalls the Legend of "Chasse-Galerie," (the legend of the Flying Canoe) which tells the tale of eight lumberjacks in old the Quebec of 1822 who, in the bleak cold of winter wanted to be home for Christmas. So they called up the Satan himself and pledged their souls to him if he would fly them home in their canoe. As they flew home, one of the men broke the pledge but calling out the name of God, which the devil in a rage caused the canoe to crash and the 8 were never seen again.

For another entertaining version of this tale, click here. 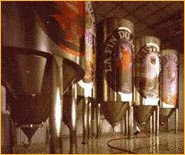 It is bottle-conditioned which it means there is some yeast left in the bottle so the beer continues to work, mature and improve the longer it sits. According to Unibroue, "When served young, it is very smooth, but when served after several years of storage, its flavour is reminiscent of port."

Due to the remaining yeast, the beer is a cloudy, carmel colour. The head disappeared quickly, which may have been my glass. It has a full, deep, sweet, malty taste to it. I am a big fan of a bitter beer but quickly became a fan of this one. It is not one for a hot summer day but would serve better on a cool spring evening like I have here.

Maudite has me wanting to try other beers in the Unibroue family.
Posted by Swordsman at 20:26