Beer of the Week - May 10 - Big Rock Traditional Ale 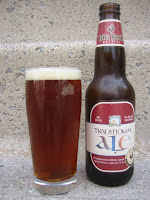 This week I was excited to find that our LCBO had six-packs of beer from Big Rock Brewery in Calgary, Alberta. I had heard a lot about this brewery and was anxious to give them a try .

The store I was in had two choices, Grasshopper Wheat Ale and the Traditional Ale. I chose the Traditional. I see that Big Rock's Pale Ale and Warthog Ale are also available in Ontario but not at this store.

I like that the brewery is helping to celebrate the 100th anniversary of the Burgess Shale on Mount Burgess in British Columbia by Charles Doolittle Walcott. The shale contains fossils which are 505 million years old "Discovered in 1909 in Yoho National Park by Charles D. Walcott, the Burgess Shale not only challenges the evolutionary theories of Charles Darwin, but provides a glimpse of what life was like on Earth – 505 million years ago!"

Big Rock is brewing a limited special ale for the occasion and calling it Shale Ale. Over 4,000 scientists are attending the special geology conference put on by the the Burgess Shale Geoscience Foundation where the Shale Ale will be served. The brewery is known for creating new beers for special occasions and then donating a percentage of the sales to charitable foundations. Gotta like that!!

And the beer itself??

Well, I must say I was disappointed. There is not much aroma to the beer. It does have a nice colour and holds a good head. I felt the taste was watered down and disappear quickly. The second beer was the same.

The fact that the company has been around for so long says it must brew some good beer. Although I won't be buying this one again, I do plan to try some others.
Posted by Swordsman at 19:27