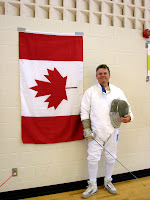 Twice a year, the USA Fencing Association holds a large fencing competition called the North American Cup (NAC), in various cities around the U.S for all different divisions and age groups. I am lucky as I am an old fella in my fifties so when I go, I can fence in the over 40 combined and the 50-59 age group.

Sabre is my weapon. Fencing is pure joy.

I love these events as I get to fence in an advanced level of competition and visit cities that I might not have considered visiting. This past weekend's tournament was in Atlanta Georgia. A chance to break away from the snow and cold of Canada.

Although I have to be good (I don't travel all that way to fence with a huge hangover), I still like

to wander the city and visit a pub or two. I arrived in Atlanta on Saturday, threw my stuff in my room, and the hotel shuttle took me downtown to my first destination, Max Lagers.

I was starved and ordered a bison cheeseburger which was quite delicious. Being a brewpub, I was expecting great things for their beers and was a little disappointed that there were only three on tap. The Max red was the best of the three I sampled but I didn't find it outstanding.

The bartender did say that instead of heading downtown, I should walk about 10 blocks to the midtown area. So heeding the advice of the locals, I headed midtown and found another brewpub

called Gordon Biersch, which is a chain of brewpubs.

The food looked great. I was full but ordered their seasonal brew which was an Alt Beer. It was delicious. I thought I had found a spot for lunch the next day and a place to watch the NASCAR race so off I went wandering again.

That's when I found it.

I rounded a corner and there was a place called Taco Mac. I like Mexican food so peeked in the window to see if it might be a place to eat Sunday or Monday. What I saw was many TVs, lots of people with beers and I thought I might as well join them.

When I walked up to the bar, I could not believe all the beer taps! It had to be for display only but no, they all worked. Behind the bar in the centre was where the hard liquor was, and on each side, two rows of 35 taps each. That's right 140, I repeat, 140 beers on tap. and another 375 beers in the bottle.

Rachel worked the bar and I ordered a Dogfish Head 90 minute IPA, which I always wanted to try. As I sat sipping it, Rachel kept coming back with samples of beers I might like. Thanks, Rachel! I ordered one more beer, with Rachel continuing provide extra samples. A stout here, a pale ale there ... this was a place I could settle into.

I did have to fence the next day so I paid up and promised to return the following day. It was 7 in the evening after all. I regretted having left my camera in the hotel room but hey, I would return.

Did I mention I was looking forward to being away from the snow and cold?? 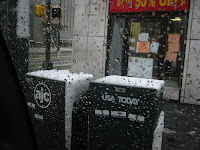 While I was fencing Sunday, the snow came. When I told James, a fellow competitor from Atlanta that it was snowing, he laughed and exclaimed in his southern drawl, "Now you will be able to see how an inch of snow can paralyze an entire city".

The hotel shuttle decided it was too dangerous to go out, police 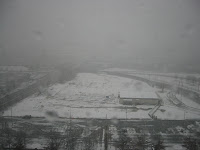 advised everyone to stay of the road and, when the second inch of snow fell, there was debate on cancelling the Hawks NBA game that night.

It sounded like once I got back to my room, that would be it for the day. Good news is that I was told there was a Taco Mac within walking distance of the Georgia World Congress Centre where we fenced!! Outstanding news! So off I went in, dragging my fencing bag through the snow to another beer paradise. 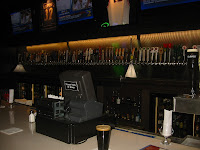 It was disappointing. ONLY 130 beers on tap and ONLY 153 beers in the bottle (please note the sarcasm). The taps ran in a single line down the back of the bar, with some being mounted on the bar itself.

Jason was the barkeep and he was as friendly, helpful and providing of free samples as Rachel, although not as good looking. Many women might argue this point. 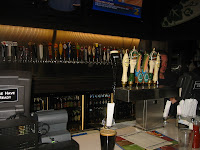 He recommended the Pepperjack Burrito, which was right on. Whenever I wanted to order, he provide me with three samples to choose from. He also would throw a sample my way when something came to mind. After a hearty meal and three beers, plus samples, I was off to my snowed-in hotel room by the late hour of 4:30 in the afternoon.

Surprising that Teena allows me to go, knowing how hard I'm going to party.

On Monday I checked out of my hotel and took my clothes to the fencing hall with me. After the tournament was over, I had a few hours to kill before heading to the airport, so I dragged my bags back over to Taco Mac to pay another visit to my friend, Jason.

It was a great weekend. I fenced well, met many terrific people and had some fine brews. There is something about southern hospitality. I saw it in so many people I met during my stay. Everyone was ready to help or just say hi. Southern hospitality is not just a myth. 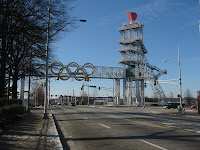 The Olympic Flame tower just outside my hotel (shot Monday) 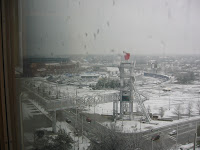 The Olympic Flame tower from my hotel room (shot Sunday)

And it's nice to get rid of you for a couple days :)

I bet you were in beer heaven! That pub had a lot of beer. How funny that an inch of snow would paralyze the city. Glad you had a good weekend!