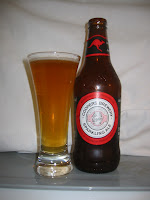 Made in: South Australia
By: Coopers Brewery Ltd

It's Valentines weekend and one usually thinks of flowers, chocolate and something sparkling to share with your loved one. For most, something sparkling means Champagne or a nice Sparkling wine. I do love both; however when I saw Cooper's Sparkling Ale from Australia in the cold section of the LCBO, I just had to give it a try.

I had never heard of a sparkling ale before and didn't know what to expect. Beer creates bubbles of carbon dioxide which float to the top and remain to create a head, which isn't really sparkling. Sparkling to me is where the bubbles explode on the surface giving off aroma and a visual playfulness. This makes the drink fun.

Is this what I should expect from a beer??

Coopers Brewing in located just outside of Adelaide in Australia. In the mid-1800s, Thomas Cooper, a stonemason by trade, was asked by his wife to brew up a batch of ale from an old family recipe to be used as a tonic. Seemed folks really enjoyed this "tonic" and, in 1862, Cooper left his job as a stonemason and opened the brewery.

After five generations, the brewery is still family-owned and the only privately-owned brewery left from the 19th century. The owners claim that they use the same recipe as the original but produced using modern equipment. It is all natural, no preservatives and bottle conditioned for naturally produced carbonation, as it would have been back in 1862.

Interesting too is that I have never before heard of a brewery that sold home brewing kits. Usually they just push their own finished product, but Coopers ships their home brewing kits all over the world. For about $18 CAD, you can make six gallons of Coopers Brewery Beer right in the safety and comfort of your own home. There are 16 different beers, ales and stouts to choose from.

Due to the yeast sediment, the ale pours with a slightly cloudy, light golden colour. The head forms but bubbles away rapidly. Despite it's 5.8% alcohol, it is surprisingly light and clean tasting, with some bitterness throughout. Much lighter tasting than I prefer. It finishes cleanly with a slight hoppy aftertaste.

It would be pleasant and refreshing to have on a hot summer afternoon but there are many more refreshing beers or ales I would have before this one.

As for romance, I would stick with Champagne or a nice sparkling wine.
Posted by Swordsman at 11:45