I was there for three days so had the opportunity to explore a little of the town, visit some bars and pubs and sample some local brews.

The liquor laws of Colorado are a little strange. Convenience stores can sell beer but only 3.2% beer. All other liquor, wine and stronger beer can only be purchased at licensed liquor stores, which can also sell mix but no food or snacks. My first stop after checking in was the liquor store located conveniently across the road. I purchased two six packs to sample, a Bristol Red Rocket Pale Ale and a New Belgium 2 Below Seasonal Ale. Six packs are priced around $8. 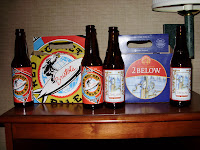 Bristol Brewery is located in Colorado Springs so I had a chance to sample something very local. I was a little disappointed in this particular brew. It didn't have that crisp bite of a Pale Ale and I found it rather bland. At their brewery, they have nine different brews on tap and I would have loved to have made a visit but did not have the time.

New Belgium Brewing Company is located in Fort Collins,CO. The 2 Below is a lovely seasonal beer, with a nice hoppy bite and crisp taste. I quite enjoyed it. In fact, as I write this, I am sipping on the last bottle I managed to bring home. Interesting to note is the brewery awards employee ownership after one year of employment. Currently there are 300 employee owners. It is also the first wind-powered brewery in the U.S. and has been since 1998.

New Belgium was a name that kept on coming up during my visit. It seemed that the few pubs that I had a chance to have a bite and a pint all carried a New Belgium brand.
Posted by Swordsman at 14:08