Pubs and Bars of Colorado Springs 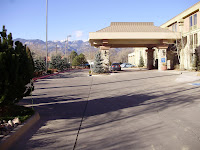 Colorado Springs is a very small city and not what I expected. I expected it to be very mountainous but it actually lies at the edge of an "alpine desert". When looking one way, you see only flat plains. And turning around, you see the mountains which seem to bust out of the ground very suddenly. The picture to the left is the view from the parking lot of the Comfort Inn South where I stayed and would highly recommend.

As I was in fencing tournaments on both Saturday and Sunday, I had to behave myself and could not explore as vigorously as I would have liked but did get a chance to visit a few places. 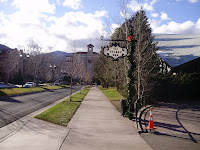 The tournaments were held at the Broadmoor, a 5 star hotel laying at the base of the mountains. It is a huge, beautiful complex and, with a thousand fencers registered, we took up three large halls. Attached to the end of the Event Centre Complex was an authentic English pub called the Golden Bee. 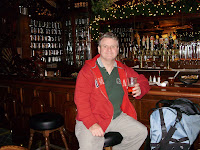 It is authentic in that in 1961, a 19th century pub in England was torn down and the panels and fixtures shipped over and reassembled. It is a warm intimate place to have a pint and a bite to eat. I found the staff to be friendly and the bartender was great to talk with. I have a problem with names and, although I enjoyed talking with him every time I was there, I forget his name but do remember he is from Chicago, a huge Bears fan, and I liked him.

It was a great place to drop into after a an exhausting day on the fencing piste (strip). Although many of the dishes seemed pricey, I did have a great bowl of chili for $6 on Friday and an excellent steak and mushroom pie after my elimination from the Sunday event. Among the many imported draughts, they also had taps for two New Belgium products, a honey wheat beer and their signature beer called Fat Tire. The honey wheat was OK but I loved the Fat Tire, which is a Belgium Amber Ale, crisp tasting and refreshing.

Saturday night I made my way into downtown Colorado Springs in search of Phantom Canyon Brewery. It is a brewpub located in three story building which was constructed back in 1901 for a railroad company. In 1909, it became the Cheyenne Hotel. It was slated to be demolished but was purchased in 1993 and became Phantom Canyon Brewery.

I had great fish and chips along with a sampling of their wares. My first taste was a cask Phantom IPA. It was wonderfully smooth with a very pleasant bitterness. It was a beer that I could easily had more of but I did want to sample. 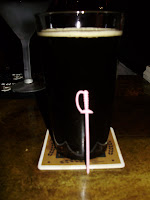 Next I had a brown ale, which to start with may have been nice but after the hoppy IPA, could not compete with. I finished with the bartenders recommendation of a Scotch Ale. A deep dark brown in color, it had a full rich flavour, nice bite and great lasting finish. An excellent way to finish a visit. A glass to my right contained skewers for fruit to put into cocktails. They were sabre-shaped, which is the most fun weapon to watch or fence with and happens to be my weapon of choice. I just had to use it while taking a photo of the Scotch Ale.

My final destination of the weekend was a downtown honkytonk called Cowboys. It was huge! There were 2 bars on the main floor and another 2 bars upstairs on the ring that opened around the large dance floor below. 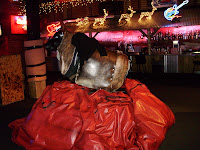 It also came complete with a mechanical bull which they fired up mostly later in the night. It was only 6:30pm but already there were four or five couples dancing to the continuously playing country. The bartender explained Friday nights the place is jammed with a younger "let's get hammered party" crowd. Saturday nights have an early crowd that frequents the place dancing until around nine, when a second crowd moves in to fill the place. Saturday night seems to feature a more mature crowd.

I ordered a New Belgium (of course) wheat beer. It was quite nice. Problem is I couldn't have just one. It was 2-for-1 until 8pm so I had to have two. The server did wait until I finished my first before pouring the second. It was a nice crisp tasting beer, which I quite enjoyed, especially considering I only had to pay $5.25 for both of them.

I found the people very friendly, helpful and warm. It would be a great place to go hiking, exploring the 300 foot sandstone spires in the Garden of the Gods. I think spending a day taking the cog railway up to the top of Pikes Peak would be a breathtaking trip.

It would be a place that I think would be great to visit and explore in the summer. My mini-vacation there had more to do with hitting people with my trusty sabre and preventing them from doing the same to me, than in being a tourist. 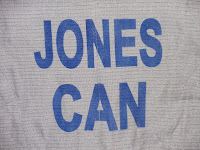