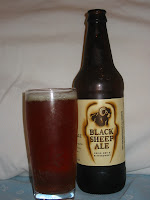 The other night I happened into the LCBO on Yonge at Summerhill in the beautiful refurbished North Toronto Railway Station. The train station was originally opened on June 14, 1916. At 21,000 square feet it is the largest liquor store in Ontario and boasts a beautiful 143 foot (43 meter) clock tower. It is a very impressive building. For a little more history of the station, click here.

I was driving by and was there for no more than an in and out to pick up a rum and a favorite brew when I spotted the Black Sheep Ale sitting on a lower shelf. As I enjoy English Ales and having it's brown on brown label calling to me, I left the store with a couple in my bag.

Black Sheep Brewery is not an old brewery but its history lies more in the family heritage. The family has brewed beer for six generations since 1827 as T & R Theakston. In 1987, the brewery was bought out by Scottish & Newcastle. 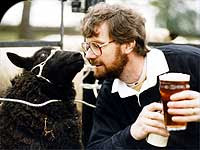 Paul Theakston, raised as a brewer by his father Frank, was proud of his families brewing heritage and it's ties with Marsham in Yorkshire, so instead of accepting a role with the new compnay, quit and sought to open his own brewery in town.

He bought a building that used to house Lightfoots Brewery back in the early 1900s, which by coincidence had been bought by Paul's grandfather for Theakston's in 1919.

He opened in October of 1992 and, according to the Beer Hunter, the first taste went to the town Vicar Brian Abell, who before he retired became Canon Abell. As the vicar brewed his own beers within the vicarage, the choose was appropriate.

"I was the first person in the world to taste Black Sheep Ale," he recalls. He also adds that he brews "a mean beer" himself.

The beer pours a nice amber colour with a good lasting head. Where many ales can be heavy tasting, this one is light and crisp. It is not a filling beer and finishes with a nice, slightly bitter aftertaste.

The do have a fun website. I have enjoyed wasting time playing the "Whack a Sheep" game (my best is 21, don't hit the black sheep!) and the "Black Sheep Pairs Game". They also have a pub quiz and a find a word game. Beware, the two I mentioned are addicting.

I enjoyed this beer and would have it again, although at $3.50 for a 500ml bottle it is a little pricey. Still it would be a great ale to sip on, during a hot summer afternoon.
Posted by Swordsman at 16:49