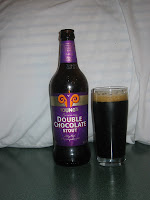 I have been really enjoying stout lately and ,when I came upon Young's Double Chocolate Stout, had to give it a go.

Young's has been a public limited company since 1890 but, in one form or another, has been in the brewery business since 1831. It's early history is a little amusing.

In 1831, Ram Brewery was bought by the partnership of Young and Bainbridge. After Young's death in 1855, his son Charles entered the partnership.The original Bainbridge was succeeded by his nephew Herbert in 1873. For 10 years things went well but in 1883 the partnership dissolved quickly when Herbert ran off with Charles wife! Charles retained sole ownership which upon his death in 1890 was formed into a private company with his children, and surprisingly his estranged wife as principal shareholders.

Charles seems to be a forgiving fellow.

In 2006, it joined into another partnership and is a 40% shareholder of Wells & Young'sBrewing Company Ltd.

Young's also owns a string of pubs in London. Teena and I were in London in 2002 and had a couple of pints at their Founders Arms location overlooking the Thames.

Originally it was first brewed in 1997 as an Easter beer but caught on to become a year round offering. Now comes the moment where I get to taste it.

It poured with a nice head and a very deep brownish black stout colour. I expected a smooth stout with chocolaty overtones, but was disappointed. Instead I found a bitter stout with almost a burnt taste to it. The bitterness is not a nice hop bitterness but one of bitter chocolate. To me, this did not work.

For some, this may be a good stout but for me it was not. It was drinkable and I did have the second bottle but there was no improvement. It is drinkable and it wasn't like I had to force it down, but there are many more great stouts out there.

If you do like chocolate and stout, give it a try. It may be worth your while. I found an article from the Toronto Star from April 9, 2008, with a differing opinion. You can read it here.

Or if you love chocolate and stout, try it for yourself and draw your own conclusions.
Posted by Swordsman at 14:40

Good blogging, Gord. Interesting background as to how that beer began - don't trust your nephew when it comes to beer. If the beer had a yummy milk chocolate flavor perhaps I would try it.