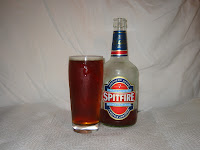 This is a tough time of year to hit the old LCBO with the mission of buying a new beer to try. There is just too much selection. I love a problem like this but it does make the selection process time consuming. After much deliberation, I decided on Spitfire Premium Kentish Ale.

Brewed by Britain's oldest brewery Shepherd Neame, Spitfire was originally brewed in 1990 to commemorate the Battle of Britain much of which was fought mostly in the skies directly over Kent.

It was launched in May 1990 at RAF Northolt in Middlesex, which is the oldest surviving RAF air base. The base was home to No 303 squadron which during the Battle of Britain and was the most successful unit with 126 confirmed kills.

It was also brewed as a way to raise funds for the The Royal Air Force Benevolent Fund which "provides financial and practical assistance to anyone who is serving, or has ever served in the RAF, and their partners and dependants". Today it still sponsors this charity and many others.

Shepherd Neame is Britain's oldest brewery brewing beer since 1698. This is also proclaimed in

raised lettering on the bottle. I am finding that contrary to how North America has generic bottles which are shared amongst the large breweries, Britain and Europe enjoy uniqueness in the presentation of their bottled brands. Brands of Shepherd Neame with their stubby body and long neck stand out from other rival brands.

Spitfire is sold by the bottle in England (it calls itself the Bottle of England) and also is currently Britain's biggest selling cask conditioned ale. I had a chance to view some of the Spitfires hilarious printed ad's which were used during the last world cup. To view them all, please click here.

It pours a dark amber colour into a glass, forms a good head and has a good strong aroma. After tasting this fine ale, I was delighted. It has a full, strong bodied flavour, which is slightly bitter but not overpoweringly so and leaves a pleasant after taste.

This is definitely one that I would purchase to enjoy again. Hopefully one day I will find myself in a pub in London again where I can order a pint of the cask conditioned version of this fine brew.