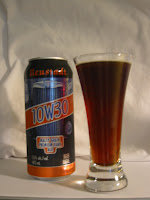 A few weeks ago I read an article in the Toronto Star travel section about a brewery in the pretty town of Neustadt, Ontario. The town has 2 claims to fame. It is the birthplace of former Prime Minister from 1957 to 1963, John Diefenbaker, (that's right, he was not born in the Saskatchewan prairies) and is the home to what claims to be Ontario's oldest brewery,
Neustadt Springs Brewery .

The beer has the unusual name of Neustadt 10w30 Brown Ale. This ale has the prestige of having won 2 silver medals back in 2004 for English Brown Ales, one at the 2004 World Beer Cup and at the 2004 Canadian Brewing Awards. 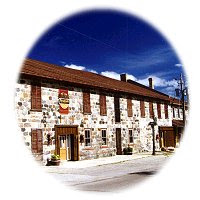 This is well-deserved. The beer has an excellent aroma (as judged by Teena, my aroma expert) and a very smooth taste. There is no bitterness to this beer but a smooth tasty flavor that lasts between sips.

Originally I was put off by the gimmiky name but have found an ale that I would purchase again or order up a pint of it at a pub.

After tasting two other of their brews at the C'est What's 20th Annual Festival Of Small Breweries on Friday, I feel this is a brewery that people should take notice of.
Posted by Swordsman at 16:18