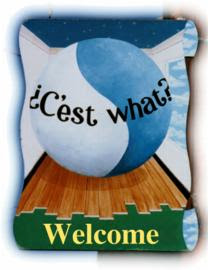 Last night, Teena and I attended the 20th Annual Festival of Small Breweries at one of my favorite places in the city, C'est What.

There were 40 beers on tap and, as Teena mentioned, we managed to taste 28 of them. For a dollar, a looney if you are Canadian, you receive a three ounce glass, which is a very good deal.

It was crowded but I found that I never had to wait long at the bar for my next couple of glasses, and others who were waiting were eager to compare notes on the beers that they had tasted.

I avoided the seasonal pumpkin beers but found a few good surprises by being willing to experiment.

In the past I have been a snob against adding fruit to beer so was quite surprised that I enjoyed the Bumbleberry so much. The McAusian Apricot Wheat was pleasant tasting too and I could see how it would be a refreshing choice on a hot afternoon.

I was also surprised on how much I enjoyed the C'est What Hazelnut Chocolate Ale. Instead of a liquor after supper, this would be a nice finish to a meal.

Some beers were not to my liking and all seemed to have the same taste that seemed to kick my taste buds in a bad. I need to identify what that taste that is for the future as it occurred in a couple of different beers including Weisbier and a Copper Ale.

We handed in our results and C'est What will email out the final scores as voted by all those who attended last night in the weeks to come.
Posted by Swordsman at 09:56