Beer of The Week - Liberty Ale

This week I was in the LCBO on Brock Street which has a completely different selection of beers. It was supposed to be a quick in and out for a bottle of Captain Morgan Dark Rum, but the beer selection, of course, delayed me. Many more Beer of the Week selections will come from this store but for this week it was Anchor Brewing Companies' Liberty Ale that caught my eye. 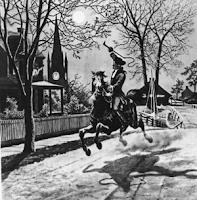 First brewed in 1975 to commemorate Paul Revere's historic ride 200 years before, it became a seasonal Christmas Ale before becoming a permanent year 'round product. Interesting note about Paul Revere's ride was that when he came into a town with his warning, he was refreshed and re-invigorated with a tot of rum, not a pint of beer.

When I cracked this beer I expected a dark ale and was pleasantly surprised by it's golden appearance. Teena, my aroma expert, rated the aroma at 4 or 5 out of 6.

This ale has a clean fresh taste about it with a pleasant hoppy bitterness to it. It uses a process called Dry Hopping which adds aroma and taste without increasing the bitterness of the brew.

At 5.9% alcohol, you would expect this ale to have a kick. Instead I found a well balanced, refreshing, excellent tasting ale. Definitely my style of beer.

Seems the Yanks might be catching onto beer making.
Posted by Swordsman at 16:28