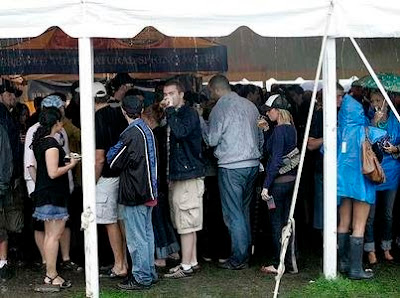 You could be forgiven if you missed Andrew Stimson at Fort York last weekend.

Though Stimson was pouring some tasty suds during the Toronto Festival of Beer, the owner and brewmaster at Neustadt Springs Brewery was doing it in the shadow of some of the biggest breweries in the world.

From his tiny booth at the raucous festival, Stimson admitted it was a little hard to compete for attention with the marketing muscle and giant advertising displays of behemoths like Budweiser and Guinness. Budweiser brought a massive trailer and booth and had its logo plastered all over the main music stage. In the Sleeman's "brand experience" area, there was even a beach volleyball court.

Click here to read the rest of the Toronto Star story.
Posted by Teena in Toronto at 09:02