Front and Back Cover of Predators and Prey 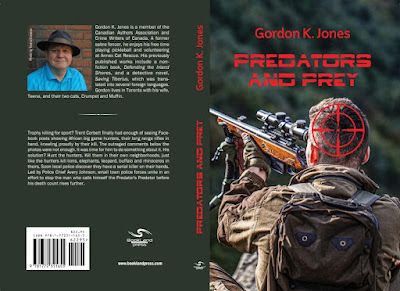 Here is the front and back cover of my upcoming novel, Predators and Prey, available for preorder from Chapters Indigo in Canada.
Trophy killing for sport? Trent Corbett finally had enough of seeing Facebook posts showing African big game hunters, their long range rifles in hand, kneeling proudly by their kill. The outraged comments below the photos were not enough. It was time for him to do something about it. His solution? Hunt the hunters. Kill them in their own neighborhoods, just like the hunters kill lions, elephants, leopard, buffalo and rhinoceros in theirs. Soon local police discover they have a serial killer on their hands. Led by Police Chief Avery Johnson, small town police forces unite in an effort to stop the man who calls himself the Predator's Predator before his death count rises further.
Posted by Swordsman at 11:54