The Beatle Bandit by Nate Hendley 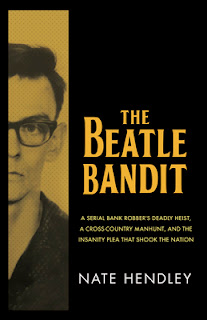 In 1964 my father worked on Goddard St, just around the corner from a plaza on Wilmington and Overbrook. A plaza was on the north-east corner with a Canadian Imperial Bank of Commerce in it. That year a man disguised in a mask and wearing a "Beatle's" wig robbed the plaza, killing a man in the process.
I remember it being a huge front page story talked about around our dinner table, so when I saw that Nate Hendley wrote a book about it called the Beatle Bandit, it was a must read for me.

On July 24, 1964, twenty-four-year-old Matthew Kerry Smith disguised himself with a mask and a Beatle wig, hoisted a semi-automatic rifle, then held up a bank in North York, Ontario.

The intelligent but troubled son of a businessman and mentally ill mother, Smith was a navy veteran with a young Indigenous wife and a hazy plan for violent revolution.

Outside the bank, Smith was confronted by Jack Blanc, a former member of the Canadian and Israeli armies, who brandished a revolver. During a wild shootout, Blanc was killed, and Smith escaped — only to become the object of the largest manhunt in the history of the Metropolitan Toronto Police Force.

Dubbed “The Beatle Bandit,” Smith was eventually captured, tried, and sentenced to hang. His murderous rampage had tragic consequences for multiple families and fuelled a national debate about the death penalty, gun control, and the insanity defence.
I found the story of the robbery and the others that followed it very interesting. The reader can see how well researched the book was in providing in depth detail of the crimes and all the people from both sides involved. I never realized other robberies followed or the fate of the man who executed them.
A well told, involved, true story.
About Nate Hendley 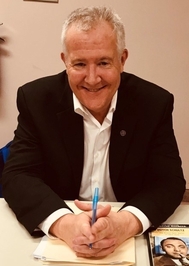 Nate is a Toronto-based journalist and true-crime author who has written over a dozen non-fiction books about gangsters, wrongful convictions, cons and hoaxes, and illegal drugs, among other topics. His last book, The Boy on the Bicycle: A Forgotten Case of Wrongful Conviction in Toronto, was a finalist in the Arthur Ellis Awards for excellence in crime writing in 2019 and was longlisted for “The Very Best!” Book Awards 2018 by The Miramichi Reader. Nate also hosts a blog, Crime Story, devoted to crime-related topics.
Posted by Swordsman at 16:25