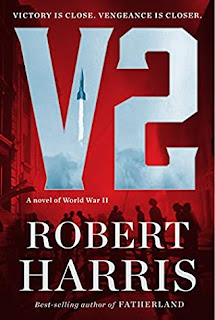 Today I finished reading V2: A Novel of World War II. It was written by English author, Robert Harris, who has written many historical fictions set in World War Two.
It's November 1944--Willi Graf, a German rocket engineer, is launching Nazi Germany's V2 rockets at London from Occupied Holland. Kay Connolly, once an actress, now a young English Intelligence officer, ships out for Belgium to locate the launch sites and neutralize the threat. But when rumors of a defector circulate through the German ranks, Graf becomes a suspect. Unknown to each other, Graf and Connolly find themselves on opposite sides of the hunt for the saboteur.
Their twin stories play out against the background of the German missile campaign, one of the most epic and modern but least explored episodes of the Second World War. Their destinies are on a collision course.
V2 is an excellently written novel. Harris obviously did many hours of painstaking research in order to write this novel. I really enjoyed how he told the tale from both sides of the war.
Graf, originally worked with Wernher Von Braun, a German Aerospace Engineer, who was one of the innovators of rocket development and wanted to send rockets into space. Instead, he and Graf end up working with the Nazi's creating their missile program. Graf feels the war is lost, but does his job anyway.
Kay, works in the Woman's Auxiliary Air Force, WAAF, searching for German missile launch sites. She has first hand knowledge of the effects of a V2 strike, having survived one. Each chapter rotates between the two.
It's not your typical World War Two novel. I thoroughly enjoyed it.
Posted by Swordsman at 15:58