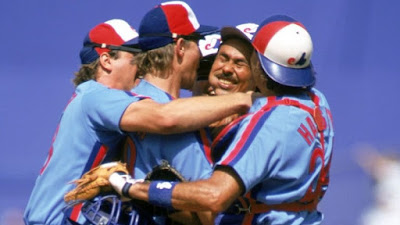 This week, TSN showed Montreal Expos Dennis Martinez's prefect game against the Los Angeles Dodgers on July 28, 1991. I recorded it and watched it this afternoon. It was interesting to say the least.

Dennis Martinez, know as El Presidente,  struck out 5 and although I wasn't counting, gave up only a few fly balls to the outfield. One Dodger, Juan Samuel, attempted to bunt for a single but Martinez dove to the ground, bare-handed the ball and threw him out. Afterwards when he was being interviewed, he was asked if there was a moment he was worried and it was the last out, a long fly ball which hung up. Martinez also was 1-3 at the plate with a single in the 8th. The announcer, Dave Van Horn, was worried the extra running might tire him out. 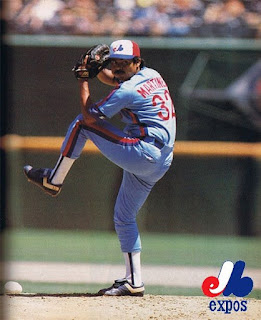 During that same, 2 team records were ready to be broken, one good and one bad. For the Expo's they could've set a record for longest team non scoring inning streak. It started sometime during Thursday nights game, then they were shut out in 10 innings Friday night, more on that in a minute, and again on Saturday. Sunday they scored 2 runs in the 7th.

The other streak was for the Dodgers. They were one inning away from matching their longest inning streak for shutting out the other team.
Martinez was pitching against Mike Morgan. Morgan had a tough day taking the loss. He only gave up 3 hits and NO earned runs. The 7th inning started with Alfredo Griffin booting the ball. Then Larry Walker drove him in with a triple. With Walker standing on third, Griffin again gave up an error to bring him in. Morgan took the loss, never giving up an earned run. 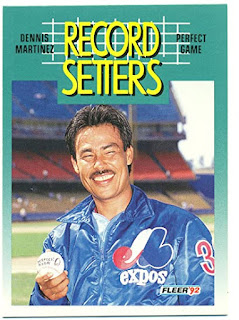 Now about Friday nights game. Mark Gardner for the Expos threw a 9 inning no hitter. The only problem was, the Expos never scored. Morgan then pitched in the 10th gave up a hit and was pulled. The next pitcher gave up the run, giving Gardner the loss. Later in the year there was a 8 man committee set up to determine if Roger Maris should be given the home run title over the Babe. They then were asked to rule on Gardner's game. The rulings? Maris gets the HR record. Gardner denied the no-hitter.

One final interesting item. Going into Friday nights game, the Dodgers had not given up a 9 inning no-hitter to any team since 1938. That weekend, they gave up two
Posted by Swordsman at 12:22