I have been meaning to read Richard Wagamese's book Indian Horse for some time. Finally I picked it up and read it. I'm glad I did. Its a remarkable tale.

With compassion and insight, author Richard Wagamese traces through his fictional characters the decline of a culture and a cultural way. For Saul, taken forcibly from the land and his family when he’s sent to residential school, salvation comes for a while through his incredible gifts as a hockey player. But in the harsh realities of 1960s Canada, he battles obdurate racism and the spirit-destroying effects of cultural alienation and displacement. Indian Horse unfolds against the bleak loveliness of northern Ontario, all rock, marsh, bog and cedar. Wagamese writes with a spare beauty, penetrating the heart of a remarkable Ojibway man.

The story had me totally involved. I was pulling for Saul Indian Horse all the way through, suffering through his down times and cheering him on during the good. This definitely is not a sport or hockey tale but the life of an Objibway man.

Indian Horse is now a movie which I declined to see until I read the book. There's no way the movie will be able to stand up to the power of the book but I'm sure, if done well, it could capture much of it's essence.

Personally, I feel this should be mandatory reading in all Canadian schools.

Richard Wagamese (1955–2017), an Ojibway from the Wabaseemoong First Nation in northwestern Ontario, was recognized as one of Canada's foremost First Nations authors and storytellers. 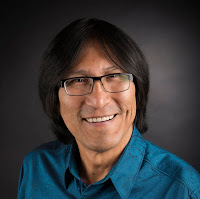 His debut novel, Keeper 'n Me, came out in 1994 and won the Alberta Writers Guild's Best Novel Award. In 1991, he became the first Indigenous writer to win a National Newspaper Award for column writing. He twice won the Native American Press Association Award for his journalism and received the George Ryga Award for Social Awareness in Literature for his 2011 memoir One Story, One Song.

In 2012, he was honoured with the Aboriginal Achievement Award for Media and Communications, and in 2013 he received the Canada Council for the Arts Molson Prize. In 2015, he won the Matt Cohen Award, a recognition given out by the Writers' Trust of Canada that honours writers who have dedicated their entire professional lives to the pursuit of writing. In total, he authored fifteen books including Indian Horse (2012), the 2013 People's Choice winner in CBC's Canada Reads competition, and his final book, a collection of Ojibway meditations, Embers (2016), received the Bill Duthie Booksellers' Choice Award.
Posted by Swordsman at 15:29

Glad to see you liked this as much as I did. I haven't read a book of his I didn't enjoy. They also all have something to say about our society.