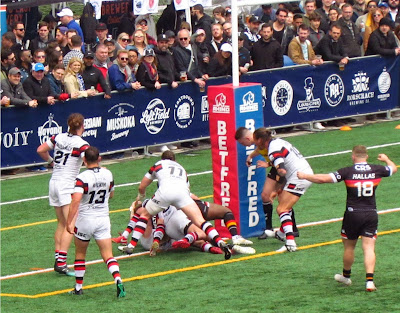 This afternoon the 11-1 Toronto Wolfpack played host to the 8-4 Bradford Bulls at Lamport Stadium, also know as "The Den." 8363 fans were in attendance. Teena and I are season ticket holders and were there with our friends, Rona and Jacob. 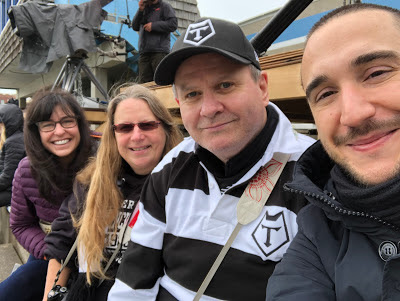 Jefferson warmed up the crowd before the contest. 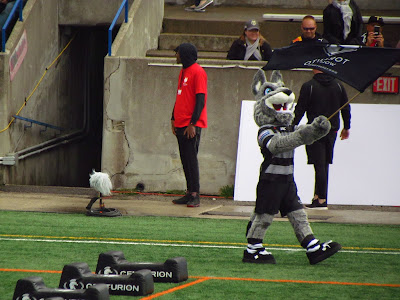 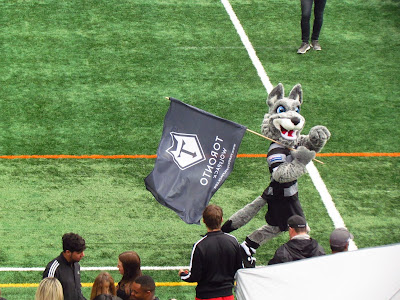 As always, a big cheer erupted when the Wolfpack took the field. 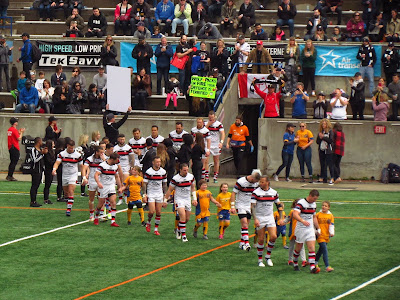 The singing of God Save the Queen and Oh Canada. 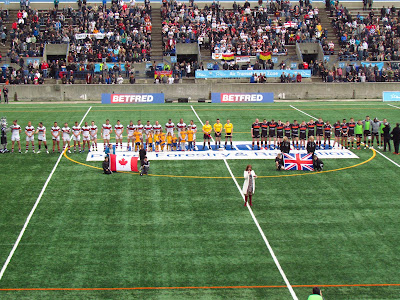 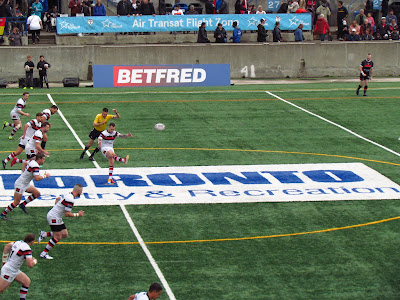 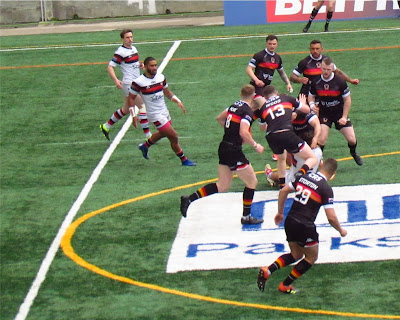 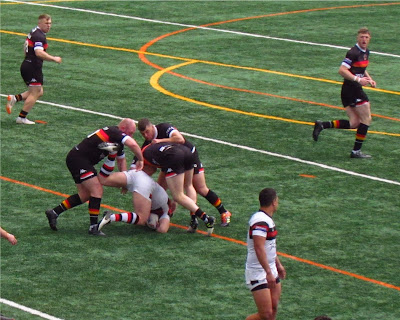 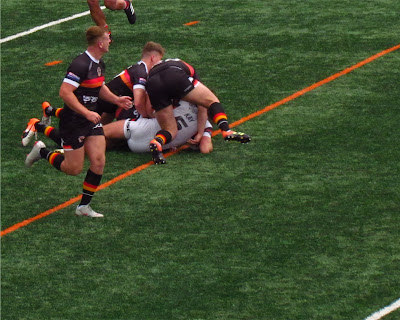 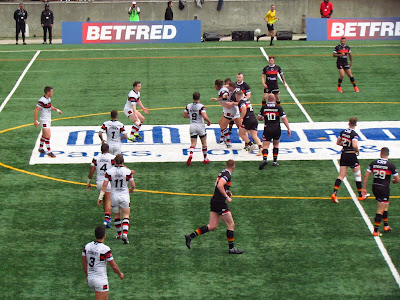 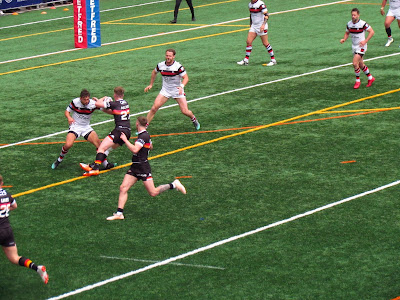 500 Bradford fans flew over from England for the game and all sat together. They were loud and fun. We heard after the game David Argyle, the Wolfpack owner, went into their section and gave each one a can of beer. Welcome to Canada! 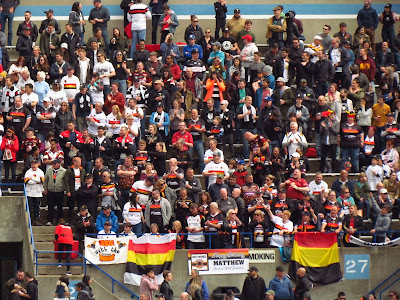 It was a tough contest in the first half with Toronto leading 14-12. The Wolfpack dance team gave a performance. 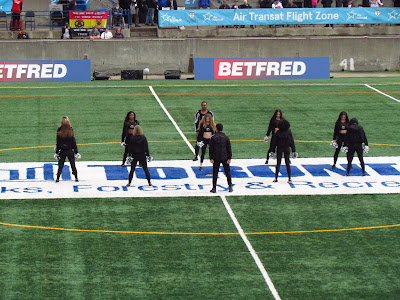 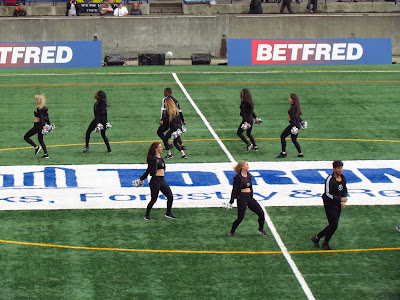 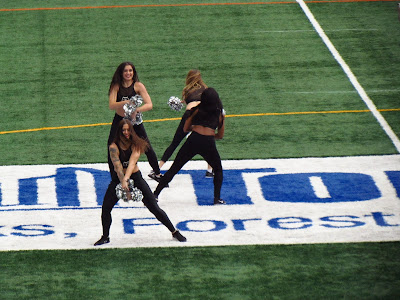 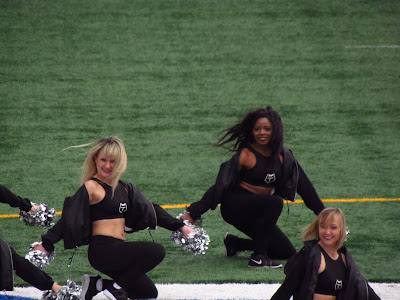 It was Ladies day at the Den. Two female rugby teams came out and played a mini game during halftime. Samantha, a Wolfpack media person, interviewed a couple of the players. 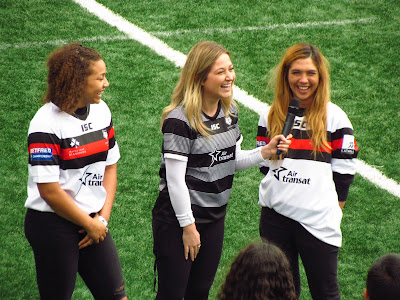 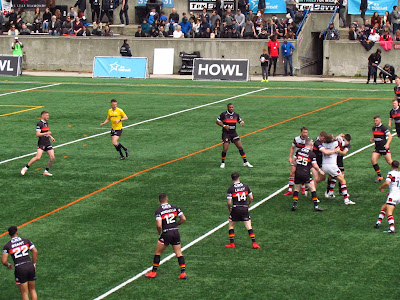 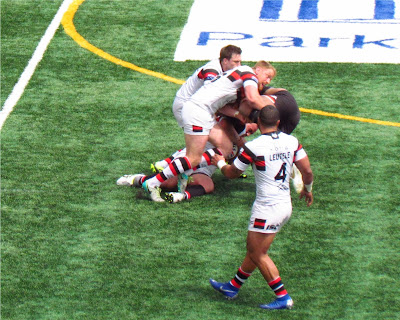 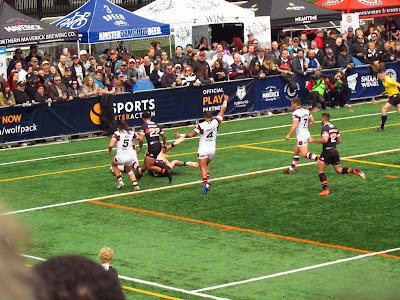 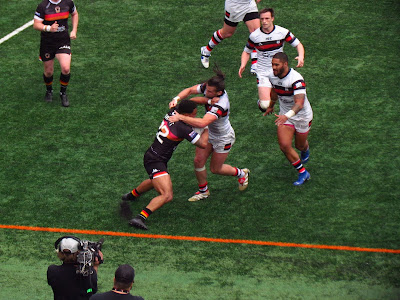 This was fun. Whenever the Wolfpack scores a try in the north goal area, they kick the convert towards King Street W. As they line up the kick, fans yell "Streetcar!" or chant in rhythm, "hit the streetcar" clap, clap ... clap, clap, clap.

Today Gaz O'Brien hit one, to a great roar from the crowd. So special, it was mentioned in CBC's report on the game. 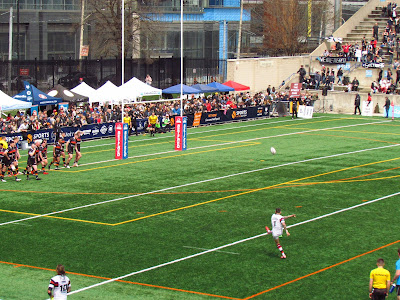 The second half was much more fun for Wolfpack fans as they scored 22 points to Bradford's 4 to take the game 36-16. The Wolfpack are now in first place by two games. 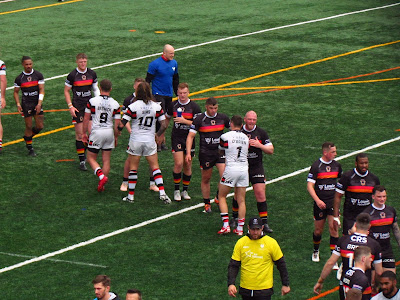 Samantha interviewed fan favourite, Liam Kay, after the game. He was injured near the end of last year and had to miss the playoffs. Today was his first game back and he scored a try with seconds to go in the match. 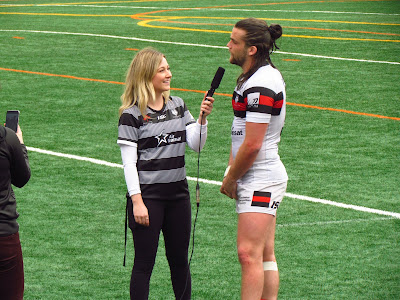 The beer garden, all craft beer, stays open for 2 hours after the game. Many players join the fun. 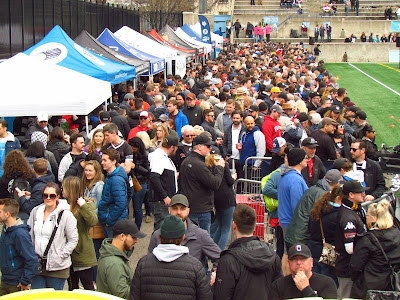 It was a fun afternoon, as always but a little chilly. The sun did make an appearance in the second half. The Wolfpack don't return to Lamport until June 15th. Yes, we'll be there.
Posted by Swordsman at 15:30