Defying Limits: Lessons from the Edge of the Universe by Dr. Dave Williams 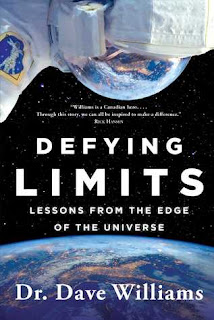 At the beginning of June, my friend, Malcolm, and I went to the Toronto Reference Library to see a talk given by Dr. Dave Williams. Dr. Williams was the head of emergency surgery at Sunnybrook Hospital in Toronto before he submitted his name and became an astronaut. It was a great talk and I walked away with his Defying Limits under my arm.

Dr. Dave has led the sort of life that most people only dream of. He has set records for spacewalking. He has lived undersea for weeks at a time. He has saved lives as an emergency doctor, launched into the stratosphere twice, and performed surgery in zero gravity.

But if you ask him how he became so accomplished, he’ll say: “I’m just a curious kid from Saskatchewan.” Curious indeed.

Dr. Dave never lost his desire to explore nor his fascination with the world. Whether he was exploring the woods behind his childhood home or floating in space at the end of the Canadarm, Dave tried to see every moment of his life as filled with beauty and meaning. He learned to scuba dive at only twelve years old, became a doctor despite academic struggles as an undergraduate, and overcame stiff odds and fierce competition to join the ranks of the astronauts he had idolized as a child.

There were setbacks and challenges along the way—the loss of friends in the Columbia disaster, a cancer diagnosis that nearly prevented him from returning to space—but through it all, Dave never lost sight of his goal. And when he finally had the chance to fly among the stars, he came to realize that although the destination can be spectacular, it’s the journey that truly matters.

In Defying Limits, Dave shares the events that have defined his life, showing us that whether we’re gravity-defying astronauts or earth-bound terrestrials, we can all live an infinite, fulfilled life by relishing the value and importance of each moment. The greatest fear that we all face is not the fear of dying, but the fear of never having lived. Each of us is greater than we believe. And, together, we can exceed our limits to soar farther and higher than we ever imagined. 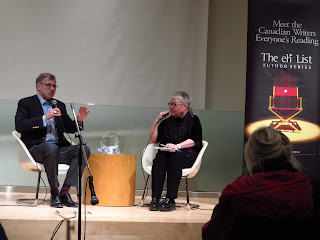 During his talk, he was very philosophical regarding what he had accomplished and his life in general. He comes through the same way in his book.

It's not only well written but his descriptions of what he saw and felt while in space were inspiring. In fact, his views on life and death are just that. Inspiring.

The last chapter of the book describes an incident which occurred with a patient he was attending to at a hospital. I won't spoil it for you but it was one of the most beautiful, sad and romantic things I have ever read.

I really enjoyed reading of his experience in hearing about having cancer and what he felt going through treatment, learning what it's like to be the patient and not the doctor. Having gone through it myself, I could identify with everything he said. He doesn't call himself a cancer survivor. Instead, he's a member of the cancer club. It's a club I also belong to.

He writes quite a bit about living in the moment. Don't worry about leaving a legacy, just live your legacy. In fact, that's how he autographed my book and how I've always been trying to live it.

It was a pleasure and a joy to hear him speak and to read his book. 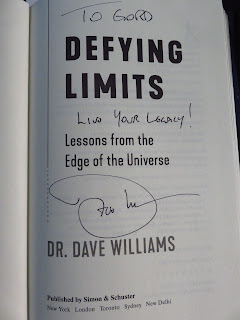