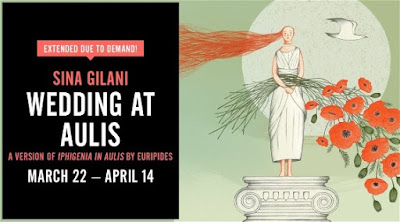 Although I'm one who always enjoys happy endings, in the past few years I have become quite interested in Greek tragedies. I have seen two or three in the past and this afternoon went to see Wedding at Aulis at the Young Centre for the Performing Arts in the Distillery District.

The play is a version of a Euripides play, Iphigenia at Aulis by Iranian-Canadian Sina Gilani. Euripides lived from 485 BC to 406 BC. Obviously these are estimated dates but yes, the play is certainly ancient.

When Euripides wrote Iphigenia at Aulis around 407 BC, he was reworking older material that was already central to Greek Culture. To write Wedding at Aulis, Sina Gilani has reworked Euripides. Filtering Euripides through his readings of myth, his understanding of nation and his particular sense of story-telling, Gilanin has created Wedding, and invites us to witness this simultaneously ancient and new, necessary story.

The play is 90 minutes long and performed in a small theatre space with about 80 seats circling the stage. As always with any Soulpepper production I have seen, it was well-acted and produced. It certainly kept me involved and engrossed.

The chorus, which always seems to appear in Greek tragedies, performed two songs which sounded wonderful and added to the emotion of the story. I thought Raquel Duffy was amazing as Clytemnestra and played the role with great range of emotion from anger, hope and helplessness. She is the mother of Iphigenia (Alice Snaden), who may become married to Achilles (Sebastien Heins) or be sacrificed to the Gods so the Greeks can sail to war to attack the Trojans. Quite the position for Iphigenia to be in!

Stuart Hughes too was a standout as the Greek king Agamemnon and father of Iphigenia. He had the voice and presence of a king.

I wanted to see right after it opened but performances sold out fast. Turns out I was lucky to be able to get tickets for today. It would have been a shame to have missed this. 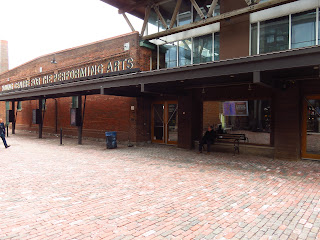