"It's A Wonderful Life: A Live Radio Play" at the Lower Ossington Theater

Tonight was opening night for It's a Wonderful Life: A Live Radio Play at the Lower Ossington Theater. Teena and I were there. This is the third year in a row we have seen this play here, which, I guess, makes this a Christmas tradition for us! The first two we saw were excellent and tonight we were not disappointed.

Faced with a life of dreams deferred, George Bailey sets out to throw himself from a bridge — until a dotty angel-in-waiting shows him what might have been. Don't miss this beloved holiday classic, brought to captivating life as a live 1940s radio broadcast!

Revisit Bedford Falls, fall in love again with George and Mary, and discover the magic of an angel named Clarence! It’s Christmas Eve in 1947, and inside a radio studio, a live broadcast brings to life Frank Capra’s timeless film in all of its feel-good glory!

Be a part of the live studio audience, and join the cast and crew as they take you on a journey through the most important evening in one man’s life. It’s the perfect holiday outing for the entire family and, who knows, an angel might even get his wings!

The play takes place inside a radio station broadcasting the play in the days before TVs were around. It was interesting watching how the different sound effects were created, such as one person crumpling candy wrappers while another snapped Popsicle sticks to imitate the sound of a crackling fire. I closed my eyes many times to experience it in the same way as person listening on a radio.

I found it very interesting too, how the performers didn't just read their lines into their microphones (old fashioned 40's style) but would act it too. The broken-hearted look on George Baily's face (as acted by character Jake Laurents, played by Vince Deiulis) was memorable. the actors really got into their roles. I thought Jada Rifken was a hoot with her facial expressions playing her many roles in the performance. There wasn't a weak player on the stage.

Each performer when not in the action would work the sound effects. Again I found this so interesting. The cast even did two 40's style commercials.

The story is a classic. I would say I enjoy and become as much involved in this live performance, as I do in the original movie.

A must see for this time of year. 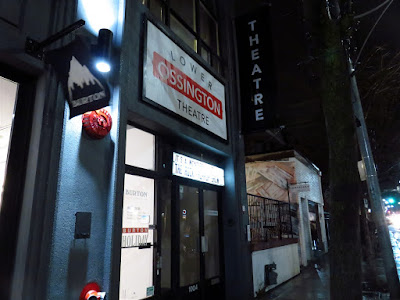