Book Review - Astrophysics for People in a Hurry 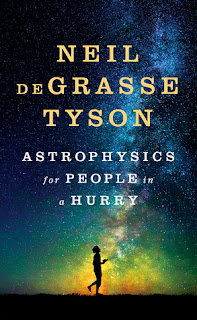 "The universe is under no obligation to make sense to you." Neil deGrasse Tyson

I have seen Neil deGrasse Tyson speak and read his entertaining and informative book, The Pluto Files (I still say it's a planet!), so when he came out with Astrophysics for People in a Hurry, I had to read it.

What is the nature of space and time? How do we fit within the universe? How does the universe fit within us? There’s no better guide through these mind-expanding questions than acclaimed astrophysicist and best-selling author Neil deGrasse Tyson.

But today, few of us have time to contemplate the cosmos. So Tyson brings the universe down to Earth succinctly and clearly, with sparkling wit, in tasty chapters consumable anytime and anywhere in your busy day.

While you wait for your morning coffee to brew, for the bus, the train, or a plane to arrive, Astrophysics for People in a Hurry will reveal just what you need to be fluent and ready for the next cosmic headlines: from the Big Bang to black holes, from quarks to quantum mechanics, and from the search for planets to the search for life in the universe.

Tyson is not only one of the smartest people on this earth but very entertaining. I found that he can explain complicated ideas so well, that normal everyday people can understand them. In this book he starts in chapter one at the very beginning, the creation of the universe, also known as the big bang.

The journey he takes us on covers the formation of our solar system, our galaxy the matter and galaxies far beyond us and the ways we have to explore them. He explains gravity, Einstein, Newton and many other scientists whose names we use today such as the Hubble telescope, named after Edwin Hubble, an American astronomer who proved that there were other galaxies beyond our home galaxy, the Milky Way.

He explains, protons, neutrons, cosmic rays, dark matter, dark energy and here's one I've never heard of, Invisible light. To say I understood it all would be a lie.

Tyson starts his last chapter, Reflections on the Cosmic Perspective, with a quote; Of all the sciences cultivated by mankind, Astronomy is acknowledged to be, and undoubtedly is, the most sublime, the most interesting, and the most useful. For, by knowledge derived from this science, not only the bulk of the Earth is discovered ...; but our very faculties are enlarged with their grandeur of the ideas it conveys, our minds exalted above (their) low contracted prejudices.

At first, I thought this had to be a recent quote but found it extremely interesting that it was made way back in 1757 by Scottish Astronomer James Ferguson.

In the last paragraph of his preface Tyson writes; In this slim volume, you will earn a foundational fluency in all the major ideas and and discoveries that drive our modern understanding of the universe. If I've succeeded, you'll be culturally conversant in my field of expertise, and you just may be hungry for more.

Well, much of the book I didn't understand but what I did understand, I found it fascinating. I read in short bursts which doesn't help with a book like this and do plan to read it again some time in the future.

I will say that Tyson did succeed in making me hungry to learn more.
Posted by Swordsman at 13:54