Book Review - The Arm: Inside the Billion-Dollar Mystery of the Most Valuable Commodity in Sports 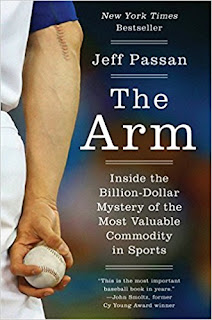 I am a baseball fan, plus I have a fantasy baseball team in a league that has been running for 27 years. Pitchers are the highest paid players in the sport and the most fragile. It seems that every pitch they throw could be their last one. I have always wondered if there was a way around that so when The Arm came out, I had to give it a read.

Every year, Major League Baseball spends more than $1.5 billion on pitchers - five times the salary of all NFL quarterbacks combined. Pitchers are the lifeblood of the sport, the ones who win championships, but today they face an epidemic unlike any baseball has ever seen.

One tiny ligament in the elbow keeps snapping and sending teenagers and major leaguers alike to undergo surgery, an issue the baseball establishment ignored for decades. For three years, Jeff Passan, the lead baseball columnist for Yahoo Sports, has traveled the world to better understand the mechanics of the arm and its place in the sport’s past, present, and future. He got the inside story of how the Chicago Cubs decided to spend $155 million on one pitcher. He sat down for a rare interview with Hall of Famer Sandy Koufax, whose career ended at 30 because of an arm injury. He went to Japan to understand how another baseball-obsessed nation deals with this crisis. And he followed two major league pitchers as they returned from Tommy John surgery, the revolutionary procedure named for the former All-Star who first underwent it more than 40 years ago.

Passan discovered a culture that struggles to prevent arm injuries and lacks the support for the changes necessary to do so. He explains that without a drastic shift in how baseball thinks about its talent, another generation of pitchers will fall prey to the same problem that vexes the current one.

Equal parts medical thriller and cautionary tale, The Arm is a searing exploration of baseball’s most valuable commodity and the redemption that can be found in one fragile and mysterious limb.

In what could have been a very boring medical read, the book is very fast moving. It describes the details of Tommy John surgery itself and how different pitchers have tried so many different ways to try to prevent injury. I really enjoyed how the author did many in depth interviews and would describe the thoughts and emotions of different pitchers who have experience elbow injury to having to go through a year plus recovery period, with millions of dollars on the line.

Is that why pitchers usually are pulled after 100 pitches? To save the arm? Partly but it's an arbitrary number not based on any scientific fact. Does limiting the number of innings a rookie throws in their first season help? Scientifically unproven.

The Japanese system for teenagers does overuse their arms and ruins many of them for life, but how much can an arm take?  Does the way a pitch is thrown help? Are there exercises that can prevent injury? All of this is explored from every angle.

Passon did an excellent job of research for this book and in the end left no stone unturned in his quest to find a solution.
Posted by Swordsman at 12:45

Pitchers hold one of the most important positions in the game of baseball and arm injuries must be so costly to their careers. This book has good insight into the importance of the arm for baseball.