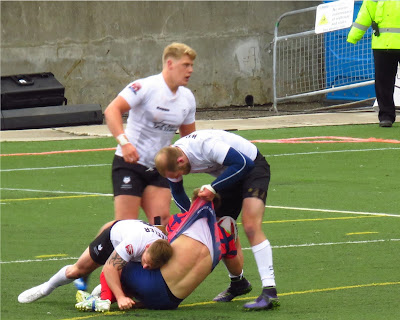 Look out Toronto, there is a new team in town playing a sport which has never been played professional in this city! The Toronto Wolfpack, the world's first trans-Atlantic team, play rugby in England's Kingstone Press League and not only are winning, but winning handily and taking no prisoners.

The Wolfpack came into today's game with a 5-0 record, with many of those wins extremely lopsided. They were taking on Oxford RFLC, who sported a 2-2 record.

Yesterday Teena and I hit the Wolfpack Store on Jefferson, across from the stadium for our gear, missing the crowds that were there before today's match. 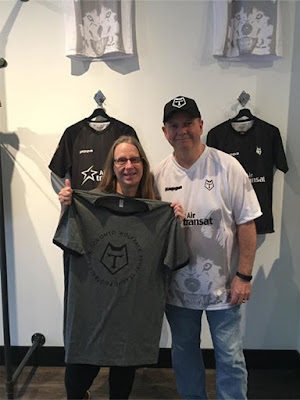 It was a cold bitter day. 7 degrees C but with the windchill dropped to 3C. I bet it went even a little lower during the game.

The Wolfpack warm up. 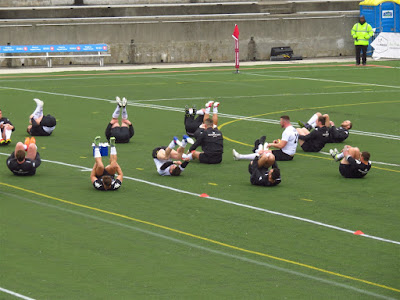 6,281 fans showed up. Originally only the East side of the stadium was open but fans were then allowed to the other side. I can see full houses in the future.

Despite the cold, the Toronto Wolfpack Shewolves were on hand to keep the crowd going. 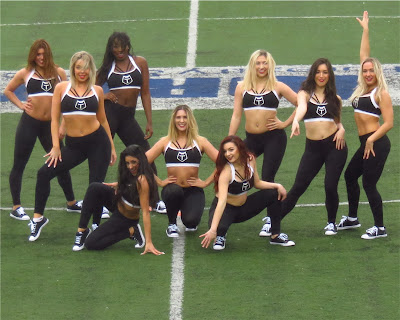 Setting up for the national anthems. 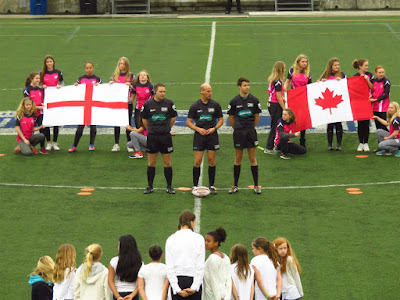 Being the Wolfpack, the fans were doing wolf calls all game long, us included, even during the opening kick-off 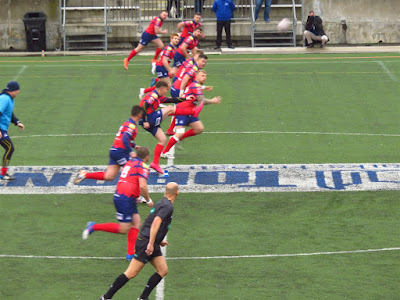 The Wolfpack scored their first try (touchdown) a little over two minutes into the game. Here is the first conversion kicked at Lamport Stadium, know as the Den during home games. A try is worth 4 points and a conversion is 2. 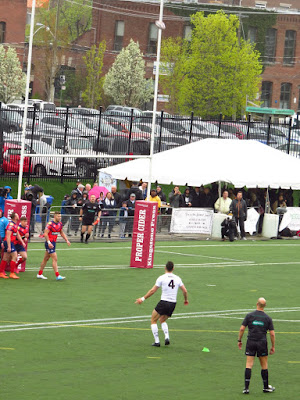 The men are big, rough, fast and hit very hard. It was so much fun to watch. 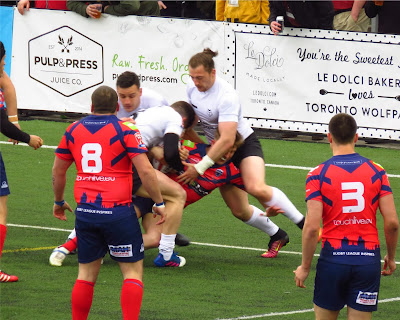 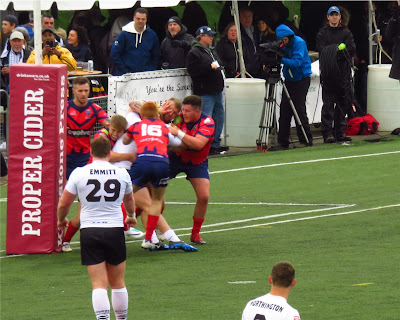 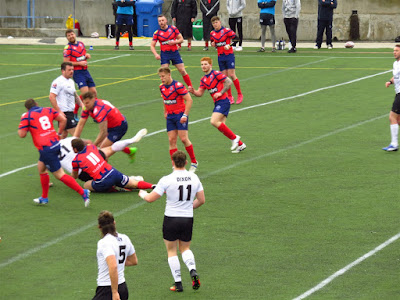 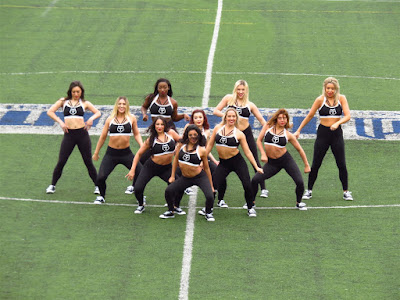 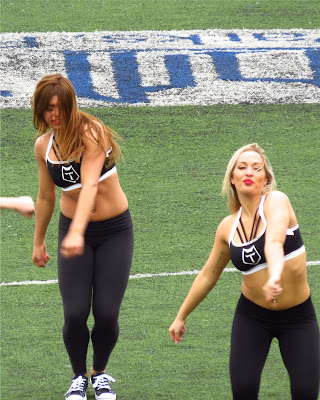 This is nice to see. A the north end of the stadium there is a beer garden. Craft beer only. No big breweries here!

The Toronto Wolfpack – the world’s first trans-Atlantic major professional sports team – is proud to announce a partnership with Ontario small brewers which will make all Wolfpack games in Toronto unique beer festivals.

This is the first ever major sporting league to partner with local brewers exclusively. Each home game will feature a rotating group of small brewers.

Once the game is over, stick around the garden for some live music and more fun. Join in the tradition of rugby and enjoy a pint with the players who battled it out on the playing field only to share a laugh and drink. 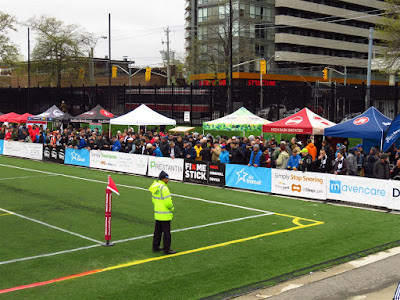 Here we are at half time. 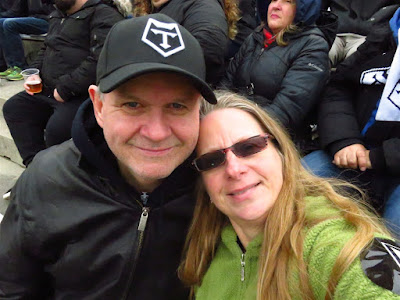 The Wolfpack come out for the second half with a 40-6 lead. 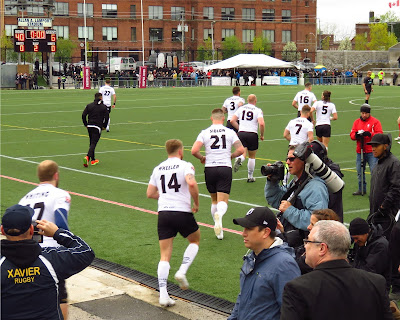 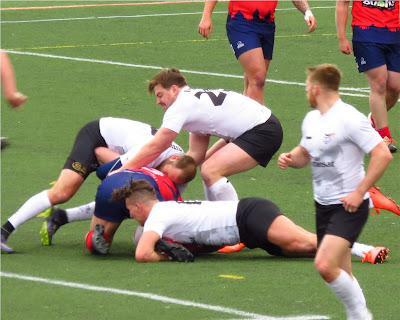 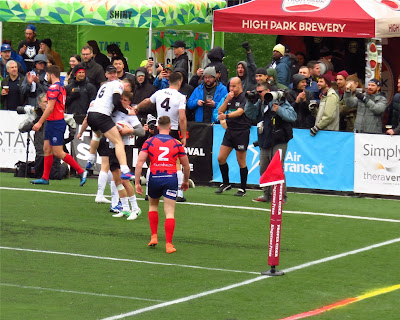 Unusual, I think, for rugby a couple of fights broke out and players were ejected. 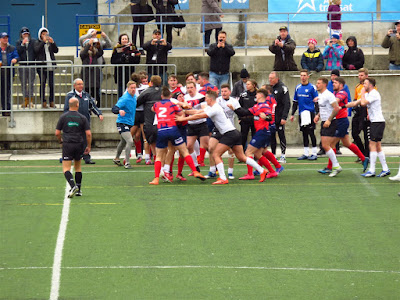 At game's end though, all was well and hands were shaken. 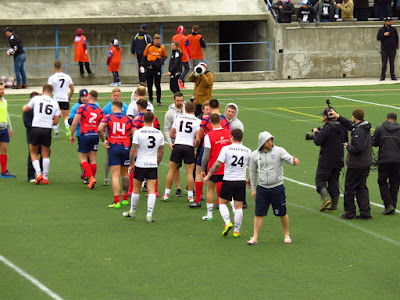 The Shewolves cam out one more time. 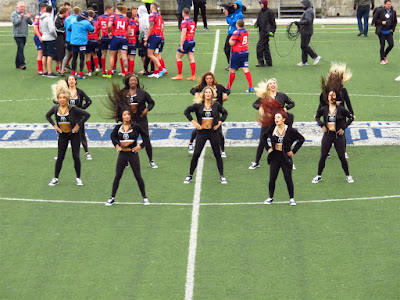 The players went around thanking the fans. Many had never even been to Toronto or Canada before and I believe they enjoyed the welcome they received. 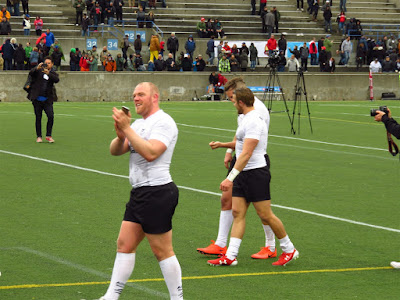 In the end, it was a lopsided 62-12 score but a fun day. Teena and I already have our tickets for the next match on May 20 and likely will not miss many games, if any at all this year.

It's fun, fast, hard hitting and so much fun. The tickets are only $25 and I would recommend to any sports fan to give the Wolfpack a try. 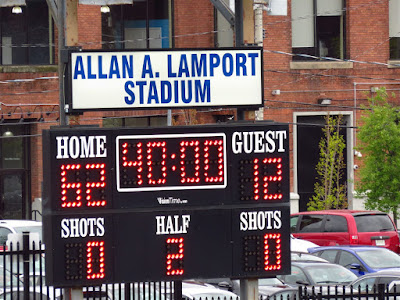 It's nice to see such positivity about this new club, long may it continue! Here's to more Canadian teams in the near future. I'm hoping to travel from Scotland for a game at some point.