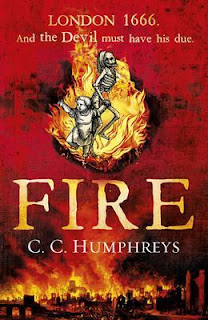 C.C. Humphreys is a Toronto-born writer who now lives in London, England. He not only writes novels but plays too and is an actor who has performed on stage all around the world as well. He once was a fencer whom I had an opportunity to briefly speak with him in the fall and was happy to hear that when he did fence, he fenced the finest of the three weapons, the Sabre.

Humphreys has written three series of books. I really enjoyed his Jack Absolute series, which were inspired when he took on the part of Jack Absolute in a play in Vancouver.

When I read what his book Fire was about, I had to read it.

The epic tale of the hunt for a serial killer threatening London's rich and poor during the Great Fire of London.

Fires don't start by themselves. They need someone to light them. What are friends for? As the Great Plague of London loosens its grip at last, Charles II's court moves back to the city, the theatres reopen and a new year arrives. 1666. It cannot be more terrible than the previous year, surely? But it can. For many will strive to make it so; to finally rid London of the curse that brought the plague upon it. A wholesale cleansing is required if society is to be born again. What's more it seems that a serial killer who stalked hand in hand with the Plague might not be dead after all. Together with actress Sarah Chalker, highwayman William Coke and thief-taker Pitman come together as one, determined to stop the brutal murder of London's rich and poor once and for all.

But another threat is on the way. It hasn't rained in five months. London is a tinderbox--politically, sexually and religiously. The Great Fire of London is about to ignite. And the final confrontation between Coke, Pitman and Sarah Chalker and their murderous adversary will be decided against a background of apocalypse.

This is the second book of a new series. Plague was the first.

I found the pace of the story fast moving but sometimes the way the heavy accents were written were hard to follow. Then again, to hear them spoken out loud, they likely would be hard to understand too.

As if the desperate fight to save London from completely burning to the ground and the flight of those trying to escape it wasn't excitement enough, put a serial killer in the midst of the story and it becomes quite the tale!

I really enjoyed the writing and characters in this story and now want to step back and read the first book of the Captain Coke series Plague. If it is anything as good as Fire, I'll be anxiously awaiting a third Captain Coke book the same as I am awaiting a fourth book of the Jack Absolute series.
Posted by Swordsman at 20:05