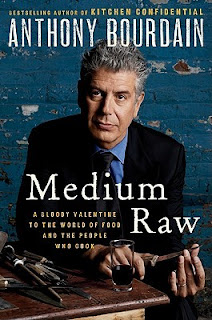 I just finished Medium Raw, another book from Bourdain about being a chef and where his journey has taken him since he won acclaim for Kitchen Confidential.

In the ten years since his classic Kitchen Confidential first alerted us to the idiosyncrasies and lurking perils of eating out, from Monday fish to the breadbasket conspiracy, much has changed for the subculture of chefs and cooks, for the restaurant business—and for Anthony Bourdain.

Medium Raw explores these changes, moving back and forth from the author's bad old days to the present. Tracking his own strange and unexpected voyage from journeyman cook to globe-traveling professional eater and drinker, and even to fatherhood, Bourdain takes no prisoners as he dissects what he's seen, pausing along the way for a series of confessions, rants, investigations, and interrogations of some of the most controversial figures in food.

And always he returns to the question "Why cook?" Or the more difficult "Why cook well?" Medium Raw is the deliciously funny and shockingly delectable journey to those answers, sure to delight philistines and gourmands alike.

I enjoyed Kitchen Confidential but found the writing uneven. Some great chapters followed by some boring ones. This book was much better. Although he sometimes goes on a little too much on a subject, such as the Alan Richman is a Douchebag one. I agree that Richman and his tactics makes him sound very much like a douchebag but Bourdain could have been much shorter with it.

But that is the way he writes.

Readers would have totally missed out on a fabulous chapter, My Aim is True, which is all about Justo Thomas, an employee at Le Bernardin (a famous New York seafood restaurant) and how he goes above expertly carving up 700 pounds of fish each day, a three man job when he is off. The end of the chapter when Bourdain takes him to eat, in that very place where he has worked for more than five years but never eaten at (chefs can't afford to eat where they are working and many have rules against it anyways). It was priceless.

He talks very candidly about celebrity chefs, working for the Food Network, who he admires, who he hates and never does he hold back. There is no flow to the order of the chapters but the last one, where he describes where he was in life when he wrote Kitchen Confidential summed up everything he wrote fabulously.

I'm sure I'll be reading another Anthony Bourdain book in the future.
Posted by Swordsman at 19:39