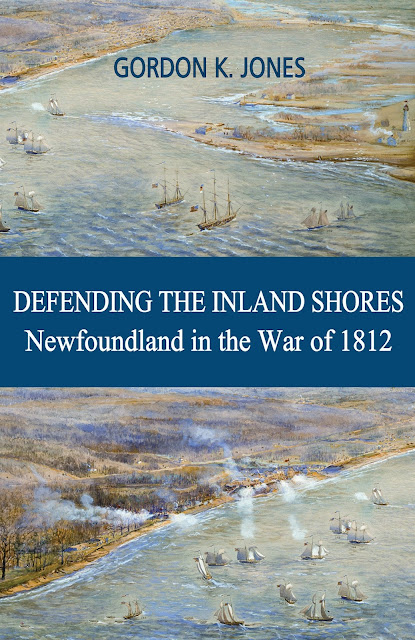 My book, Defending the Inland Shores, is now available from all major online retailers, independent book stores and from  Amazon and Indigo.

From the cover jacket:

Soldiers from Newfoundland played a significant role in the defence of Canada during the War of 1812.

The Royal Newfoundland Regiment was on the front lines of the war, fought with honour and great courage, and took heavy casualties in many military actions, including the battle of the Maumee, the battle of Fort George, and the battle of Lake Erie, to name a few. This book also portrays several legendary military commanders from the War of 1812, such as George Prevost, Isaac Brock, Andrew Bulger, and George Macdonell.

The author skilfully describes many renowned battles of the war, including the siege of Fort Detroit, the capture of an American naval schooner on Lake Ontario, a surprise attack against Ogdensburg, and desperate defence of a British ship on the Niagara River during an American night assault. Defending the Inland Shores tells these incredible stories and illustrates the important part that the Royal Newfoundland Regiment played in the war.
Posted by Swordsman at 20:10

Congratulations, Gordon! It is my own dream to be an authoress and to publish. You have to feel great right now! Carolyn.

When I saw that Teena had reviewed this book last week or so, I saw the author name and thought "cute coincidence." Now I feel like an idiot! I had no idea you had been working on this! I'm so excited for you and can't wait to read it. Sheepishly, I admit not knowing anything about this subject matter. Growing up in Newfoundland, I chalked my lack of knowledge in Canadian history as a product of our province's schooling which (at that time anyway) emphasized Newfoundland history over Canada-wide history. But that, as it turns out, does not seem to be an excuse for my ignorance about this unexpected intersection. Can't wait to read it! Congratulations!

Carolyn, I do. It took a lot of work but it was all worthwhile. Hopefully one day I'll be able to be buy one of yours.

John. Thanks! I really appreciate it. I hope that you do enjoy it! I really am surprised that not many Newfoundlanders know about their contribution in the War of 1812.