Beer of the Week - The Beers of Halo Brewery 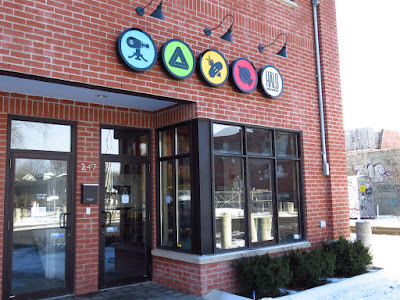 Today Teena and I took a detour while on our way to buy groceries to make a stop at Halo Brewery, which is on Wallace Avenue, about half way between Bloor and Dupont, off Landsdowne. The brewery was started by home brewers Callum Hay and Eric Portelance, who quit their full time jobs to open Halo this past May (2016).

What drew me to this brewery was a delicious Shapeshifter Sour that I had at Otto's Bierhalle last night. It was delightfully sour and full flavoured and, yes, I had more than one. I had hoped to pick up a few bottles but found that their bottle shop was sold out.

I wanted to try the Event Horizon Extra Stout with Sarsaparilla, which sounded quiet interesting but it too was sold out. Oh well, maybe another time.

The tap room and bottle shop is nicely set up, with stools at the bar and tables to sit at. 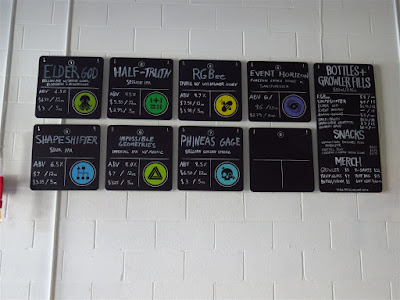 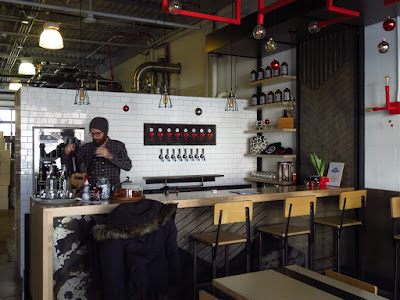 Of course, I did come home with a couple of beers to try. The first is a 4.5% Half Truth Session IPA. The company's website shows the recipe for each stage of brewing every beer, which I found interesting. 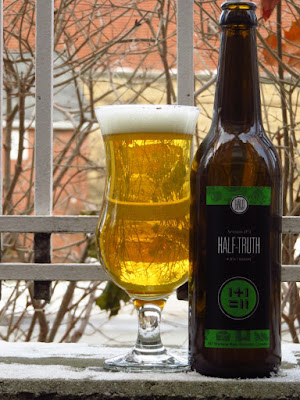 The Half Truth pours a light golden colour with a white head which lasts. The beer was quite clear as the picture shows. There was lots of citrus that comes off the beer the moment the cap was removed. This may be a 4.5% beer but is full of flavour. Bitter citrus, I sensed some orange, which I know was never added, in the flavour. The sourness stays throughout and becomes a little more bitter in the finish.

I will be buying this one again!

To the other end of the scale I came home with a couple of 8%  Impossible Geometries Imperial IPAs. 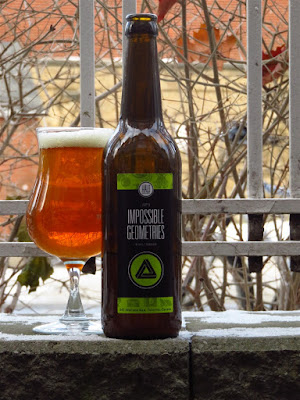 This beer pours amber in colour with a white head. There is a little funk and earthiness in the aroma. It starts just a touch watery, just for a brief moment before some bitter citrus comes in. Although there is a bit of citrus here, there is some funk and earthy tones. This is a well balanced very nice IPA.

I'm glad Halo is not too far out of our way when heading for groceries, as we will be making more detours to Halo on Shopping Saturdays.