Beer of the Week - Les Quebecoises 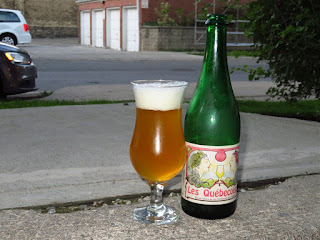 In this month's Canada Craft Club delivery was a 650 ml bottle of Le Quebecoises from Brasserie Thiriez. Judging from the name of the beer, one might think that this is from a Quebec brewery but they would be wrong. Brasserie Thiriez is, in fact, a brewery in Esquelbecq, France, that is located quite close to the Belgium border and only 20 kms from Dunkirk.

Brasserie Thiriez was opened in a location that once itself was a brewery, Brasserie Poitevin, that closed in 1945. At once time, the small town of Esquelbecq had five breweries but until Daniel Thiriez opened up this new brewery in 1996 (he sold his first brew in 1997), the town had been without a brewery for over 50 years.

On the bottle it says that this is a blonde ale with wheat added, so really is not a wheat beer. It pours a yellowy straw colour with a white head. The beer is unfiltered so is a little cloudy. Wheat beers have a special aroma and there is a little of it here in the aroma, along with some citrus. Interesting combination.

My first taste is very nice. A little wheat beer taste is noticed first followed very closely by a nice citrus hop bitterness. Neither is overpowering but provides for a delightfully well balanced beer. I really enjoyed the very long finish.

This is a wonderful enjoyable beer. It starts off like a wheat beer and finishes like a light pale ale. Wish I had another! 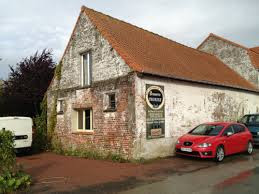