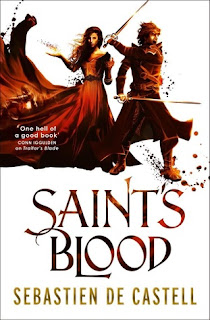 I am a huge fan of Sebastien de Castell's Greatcoat series. I have read and reviewed the first two books in the series, Traitors Blade (2014) and Knight's Shadow (2015). I was so happy to see Saint's Blood, the third book in the series come out in April.

How do you kill a Saint?

Falcio, Kest, and Brasti are about to find out, because someone has figured out a way to do it and they've started with a friend.

The Dukes were already looking for ways out of their agreement to put Aline on the throne, but with the Saints turning up dead, rumours are spreading that the Gods themselves oppose her ascension. Now churches are looking to protect themselves by bringing back the military orders of religious soldiers, assassins, and (especially) Inquisitors - a move that could turn the country into a theocracy. The only way Falcio can put a stop to it is by finding the murderer. He has only one clue: a terrifying iron mask which makes the Saints vulnerable by driving them mad. But even if he can find the killer, he'll still have to face him in battle.

And that may be a duel that no swordsman, no matter how skilled, can hope to win.

The story is told in first person by a very exhausted and weary Falcio Val Mond, who with his closest Greatcoat friends, swordsman Kest and archer Brasti, who again, or perhaps more properly, still, are trying to save the nation of Trista and install the dead king's young daughter, Aline, onto the throne.

I'm not one who likes or reads much fantasy, but I have been very caught up in each book of the Greatcoat series, this one included. The pace of Saints Blood is frantic and exhausting. There are heroes of the highest order, villains who are most evil and blood thirsty, and the people of the land who do not know which to follow..

I don't want to say much about this book as it might spoil some stories in the first two. When I picked up my first Greatcoat book, I had hoped for an excellent swashbuckling story. This entire series has given me more.

Saint's blood is 576 pages long and not one dull moment.
Posted by Swordsman at 18:14