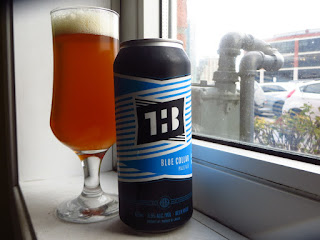 Teena and I were down in Hamilton to visit my son, Ken, and see his new place. We went for supper at a fabulous little pub around the corner from him called Rebel's Rock Irish Pub and on tap was Blue Collar Pale Ale from The Hamilton Brewery.

The owner Warren Pyper, pictured below, lives in the Corktown area of Hamilton, across from a building that used to house the Toronto, Hamilton and Buffalo Railway. He wanted a name to reflect this part of the city's history so named his brewery using the same initials of the railway, THB, The Hamilton Brewery.

The THB on the can is also a variation of the original railways logo. An interesting note about the Toronto, Hamilton and Buffalo Railway, which was in operation from 1892 to 1987 when it was bought out by Canadian Pacific, was that the railway never ran to Toronto or Buffalo. It just served Hamilton and surrounding areas. 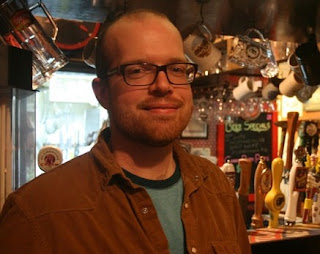 The Hamilton Brewery started selling beer in 2014 and while saving to open a brick and mortar brewery in Hamilton, contract brews out of Railway City Brewing in St Thomas, Ontario. Currently the Blue Clollar sells on tap in pubs in Hamilton and surrounding areas and is available in cans at Hamilton LCBO's.

And how is the Blue Collar Pale Ale?

The beer pours amber in colour with an off-white head. Malt and some floral hops are come through in the aroma. Sometimes there is quite a noticeable difference in the taste of a beer between being on draught and being canned or bottled but not here. This is very much the same beer I had at the pub. It's a nicely balanced beer. It starts just a little malty before the hops take over. It's not an overly hoppy ale, but has an enjoyable bitter finish, enough to satisy a hop head like me and not enough to scare off somebody who is just getting into craft beers.

Next time I'm in Hamilton, I will pick up more.