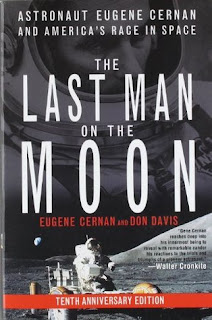 I was/am lucky enough to be born during the time of the great space race to the moon between Russia and the United States. Each mission was more exciting than the one before and it was such a thrill to watch Neil Armstrong be the first man to walk on the moon.

This book, The Last Man on the Moon, is the autobiography of the twelfth and last man to walk on the moon, Gene Cernan.

Eugene Cernan is a unique American who came of age as an astronaut during the most exciting and dangerous decade of spaceflight. His career spanned the entire Gemini and Apollo programs, from being the first person to spacewalk all the way around our world to the moment when he left man's last footprint on the Moon as commander of Apollo 17.

Between those two historic events lay more adventures than an ordinary person could imagine as Cernan repeatedly put his life, his family and everything he held dear on the altar of an obsessive desire. Written with New York Times bestselling author Don Davis, this is the astronaut story never before told - about the fear, love and sacrifice demanded of the few men who dared to reach beyond the heavens for the biggest prize of all - the Moon.

It is a fascinating look back at what the NASA space program was all about, the behind the scenes politics and astronauts attempting to jockey for position to be the first to step on the moons surface.

In the book, Cernan, who had three trips in space, twice to the moon and once to land, walk and drive on it, talks about the dedication, focus and involved training involved to be prepared for a mission. He also talks about the stress it put on families being away from each other for great periods of time. What Betty Grissom said after the death of her husband, Gus, who died with two other astronauts, Ed White and Roger Chaffee, in a fire while sitting in his space capsule in a pre-launch test launch pad, says much about how much time they had to spend apart:

That could also describe many workaholics of which I am proud to say, I am not.

I really enjoyed this book, the style in which it was written, and the fact that Cernan never seems to cover anything up about him, or the program.

If I have one complaint, it would be that the book uses black and white photos, even on the cover. Colour pictures were taken on the moon and they would have been far more sensational to see.

Before Cernan's flight, it was declared that the moon program was canceled and this would be the last trip for sometime. The last words spoken by Cernan as he stepped off the surface of the moon for the last time?

Bob, this is Gene, and I'm on the surface; and, as I take man's last step from the surface, back home for some time to come – but we believe not too long into the future – I'd like to just (say) what I believe history will record. That America's challenge of today has forged man's destiny of tomorrow. And, as we leave the Moon at Taurus–Littrow, we leave as we came and, God willing, as we shall return, with peace and hope for all mankind. Godspeed the crew of Apollo 17.

Last Man on the Moon was written in 1999, 27 years after his moon walks. So what does he think about the fact that man has not yet returned to the moon?

Too many years have passed for me to still be the last man to have walked on the Moon. Somewhere on earth today is the young girl or boy, the possessor of indomitable will and courage, who will left that dubious honour from me and take us back out there where we belong.

Last Man on the Moon is a terrific book written about a terrific adventure taken by human kind. I highly recommend it.
Posted by Swordsman at 16:37