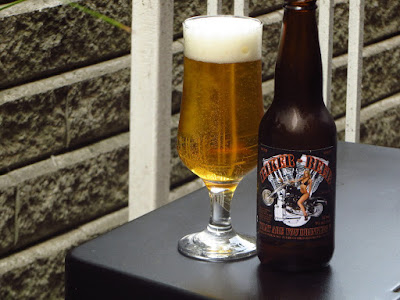 In my August Beer of the Month package, there were four bottles of Biker Beer Lager from the Biker-Beer Brewing Company, a Burlington brewery that I have not heard of before. It turns out that the brewery has been around for five years.

Back in 2010 husband and wife team, Trevor and Jan Telford, decided to create a beer aimed at Ontario's motorcycle community. According to Zoom info: Biker-Beer Brewing Company Inc. is to provide a quality beer for those of us who ride motorcycles, and those that wish they did. The large beer manufacturers do not think that the niche market of motorcycle riders is worth developing a brand of beer for ... but we disagree.

According to their Twitter page: The Biker Beer Brewing Company Inc. is trying to raise money to build our own brewery. We need $1,750,000 and are looking for $2 donations. Follow our story.

The problem is that the link to their website on the Twitter page no longer exists and they do not have a Facebook page. The brewery's Twitter page shows as being open in October 2010 but their last tweet is from January 7, 2011. On Untapped, many people are posting up to 18 hours ago that they are drinking a Biker Beer Lager.

According to a 2010 article on Canadian Beer News,  the company was contract brewing out of Nickel Brook Brewing. The LCBO apparently had all kinds of problems with the Biker Beer label and told the owners straight out they would never allow beer with that label to be sold out of their stores. The bottles I received still had the original labeling, which is a label most obviously aimed at the biker market. 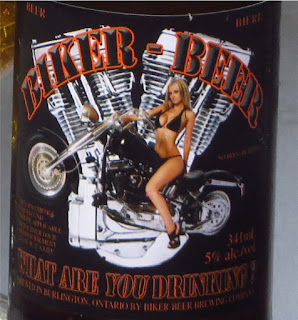 It pours a golden colour with a nice white head. Bubbles continually flow up from the bottom of the glass as this is well carbonated. I smell grass or maybe bread in the aroma. I like a bitter bite in a lager, which is why I lean more towards pilsners instead of regular lagers and find this lager a little sweet for my taste buds. Mind you, I will have no problems in drinking the other three bottles.