Beer of the Week - Dead Frog Brewery "The Fearless IPA" 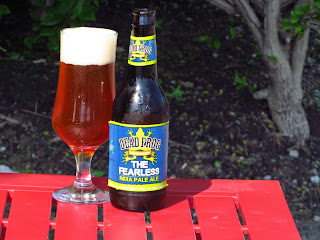 I love the name Dead Frog Brewery. How could you not?

When Teena brought home two of the "The Fearless IPA" from Dead Frog Brewery in Langley, BC, I sincerely hoped that I would love the beer as much as name. But how could a company end up with a name like like that? I discovered the reason from an interview by Kristi Ferguson in The Pulse:

I met with Dead Frog Founder Derrick Smith and Marketing Manager Chris Landsman, who shared their enthusiasm and commitment to innovation in both their brews and their marketing strategies. I had to ask about the name of the company and sincerely hoped there wasn’t a morbid story behind it. On the contrary, the folks at Dead Frog Brewery love frogs! It seems the name was, in part, chosen to reflect the current conservation issues surrounding many species of frogs. Glad to hear it. 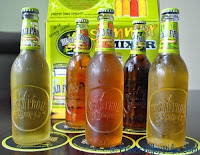 Dead Frog opened in 2006 and only two years later after a 300% increase in sales, they were sued by Sleeman in 2008 for its bottles. Sleeman claimed the clear embossed bottle started with John Sleeman’s grandfather over a hundred years ago and Dead Frog’s bottle matched too closely to the Sleeman's bottle design.

Dead Frog owner Derrick Smith explained, “Sleeman does not have a monopoly on clear-glass beer bottles, and that in any event the public is not likely to be confused because of Dead Frog’s prominent name, slogans and frog logo.”

Ultimately Dead Frog went to brown bottles so their beer would be less susceptible to becoming light struck and skunky. Brown bottles protects the beer, clear bottles do not.

Dead Frog also won an episode of 2012's CBC show The Big Decision with Jim Treliving investing, although in the end, Treliving did not invest in the company.

That same year co-founder Derrick Smith bought out his part partners and hired on a new head brewer, Tony Dewald. The Fearless IPA was his first brew.

The Fearless pours a dark amber colour with a slightly off white head, that is quite lively. Thick lacings are left behind when I sip. My first sip is bombarded with piney hops but then comes a heavy trail of  bitter citrus comes through and stays right through the long finish. This is a very excellent IPA that I would have anytime, anytime at all.

Wish I could buy it here in Ontario.