Beer of the Week - Mississippi Mud Black and Tan 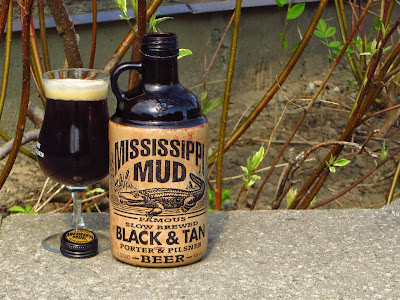 When Teena came back from a business trip to Winnipeg, she brought me back a great sampling of beers that I can't get in Ontario. One of them was in a cool looking bottle, Mississippi Mud Black and Tan. That is not a wrapper or a label on the bottle but the brown is built into it. Very cool.

From here the mystery starts. This is what it says on the bottle.

When I Googled it, the only Mississippi Brewing Company I could find is located in Baton Rouge, which makes more sense than being brewed in a town in New York State. This company, however, does not take any credit for the beer.

I read rumours that it is brewed by Matt Brewing in or Saranac Brewing, both located in Utica, New York. It seems that both are the same company. It looks like Matt Brewing was bought out, joined or changed its name to Saranac. I didn't look very deeply into this as they don't claim to brew this Black and Tan.

The name Arizona Beverage Company came up but that too was a dead end. This has all made me very thirsty so it's time for a sip.

So what is a Black and Tan. According to the bottle:

Dating back to 18th-century England, the custom of blending pale and dark beers has kept the “Black and Tan” a favorite of experienced beer drinkers for centuries. Our famous recipe combines a robust English porter with a fine Continental Pilsner, preserving the character of each, while creating the classic taste of the legendary “Black and Tan”. In true American style, we bring you the best of both beers as they meet in Mississippi Mud. 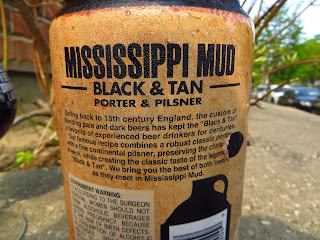 The beer pours an extremely dark brown colour, not black. The pilsner must lighten up the colour. Chocolate is quite noticeable in the aroma. The beer has a good head which takes its time settling down. Lacings are left behind as I sip.

It's an OK tasting beer. Not an ale, not a lager, but a combination of each. Some porters can be heavy but this one is actually light. A little watery in mouthfeel to start, the taste diluted chocolate comes through, then disappears in the finish, which surprisingly is lager like.

I am really glad I had a chance to try this but would not by one again. I am keeping the bottle, though.