Beer of the Week - The Beers of Dieu du Ciel, Montreal 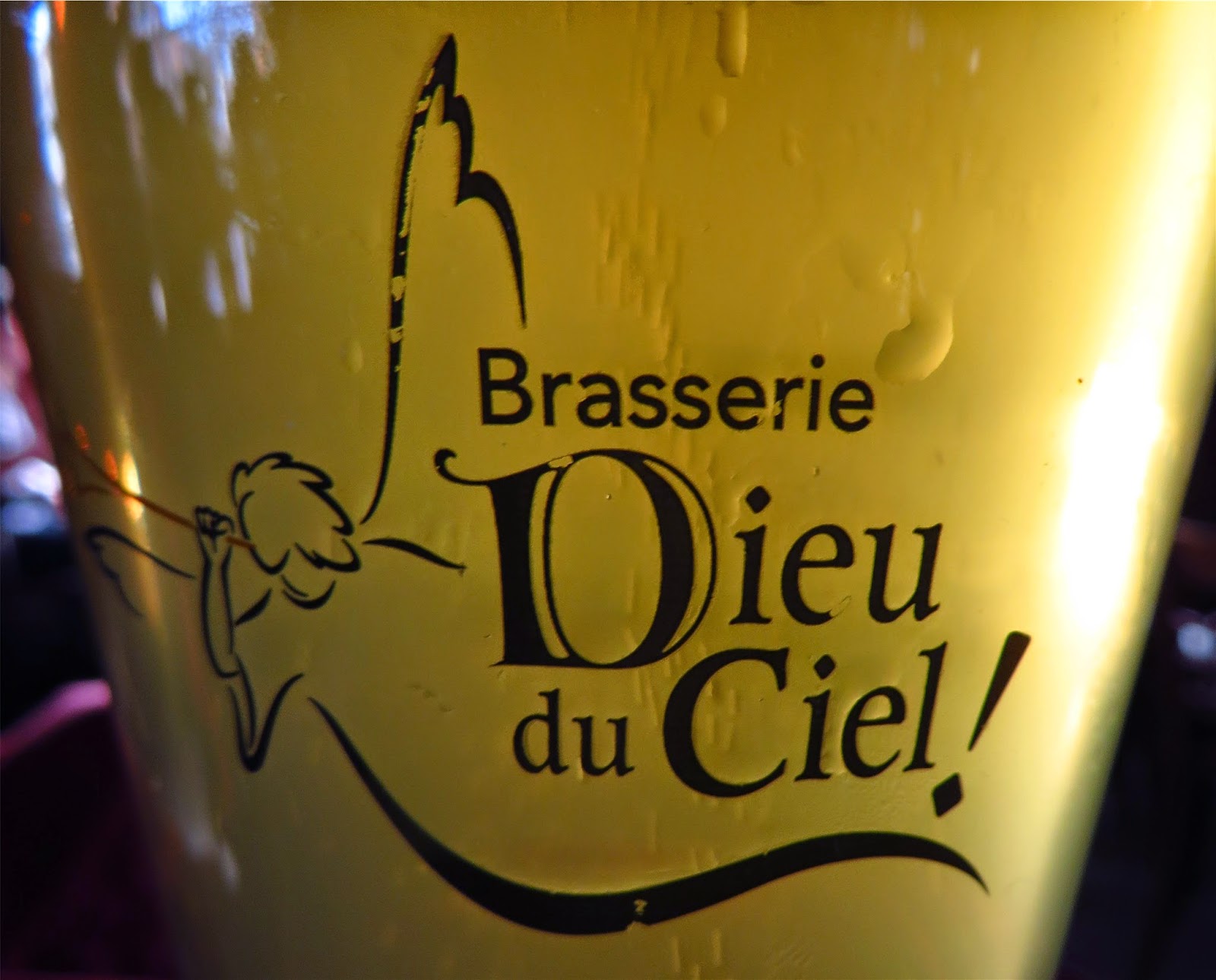 One of the items on my "to do" list when we arrived in Montreal was to hit Brasserie Dieu du Ciel. I have tried one of their beers before, back in 2010, a Rosée d'hibiscus which used Hibiscus flowers and was quite good. The pub and beers are regularly mentioned on the Bar Towel and in 2010, it was named the Best Brewpub in the World by RateBeer.

After our climb up and down Mont Royal, Teena and I went into Dieu du Ciel with a big thirst. It is a nice, familiar and friendly pub. We had a chance to talk with a few of the patrons here. Interesting that for late on a Sunday afternoon, the place was always full. I saw quite a few woman having the Hibiscus beer. 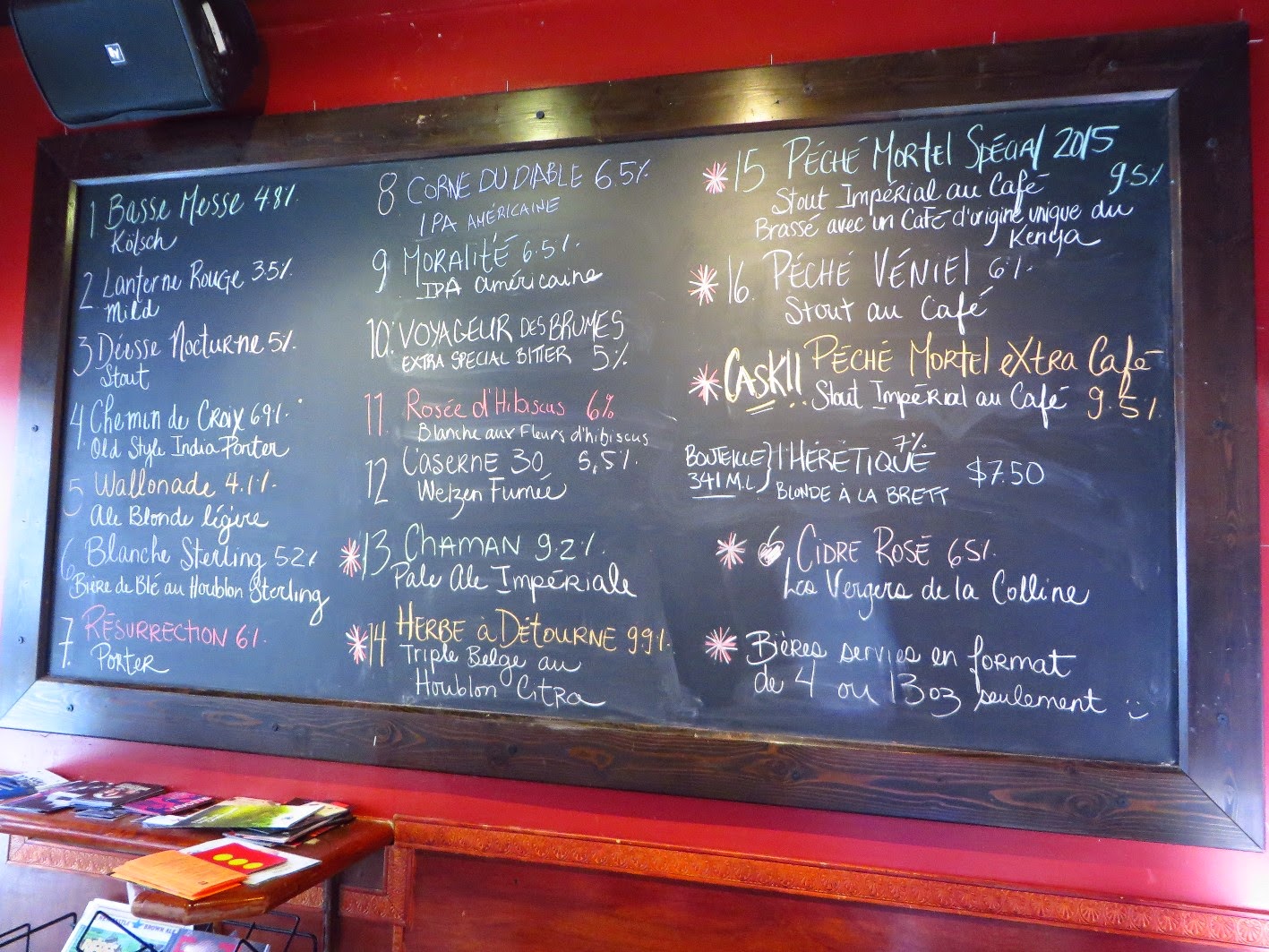 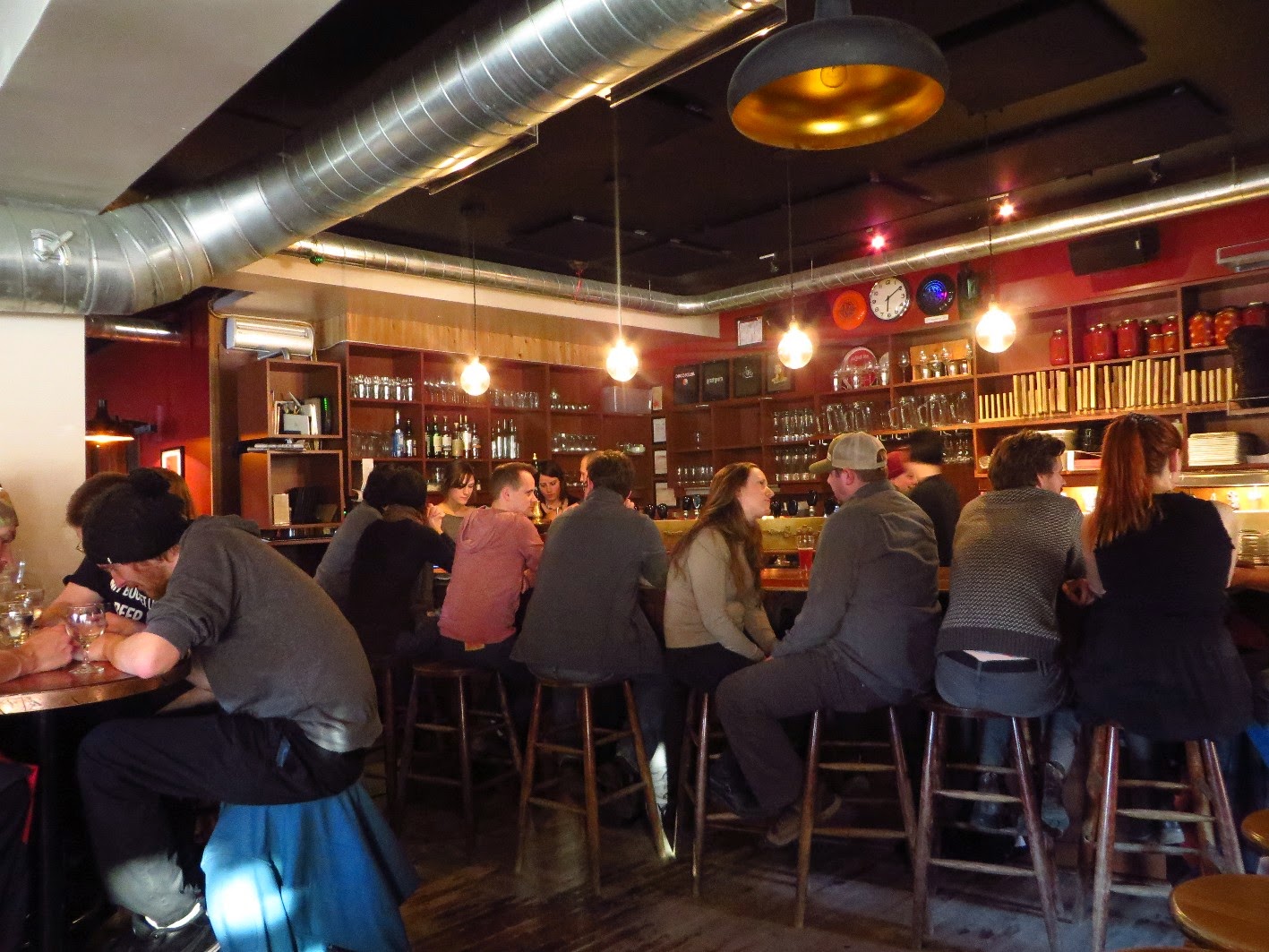 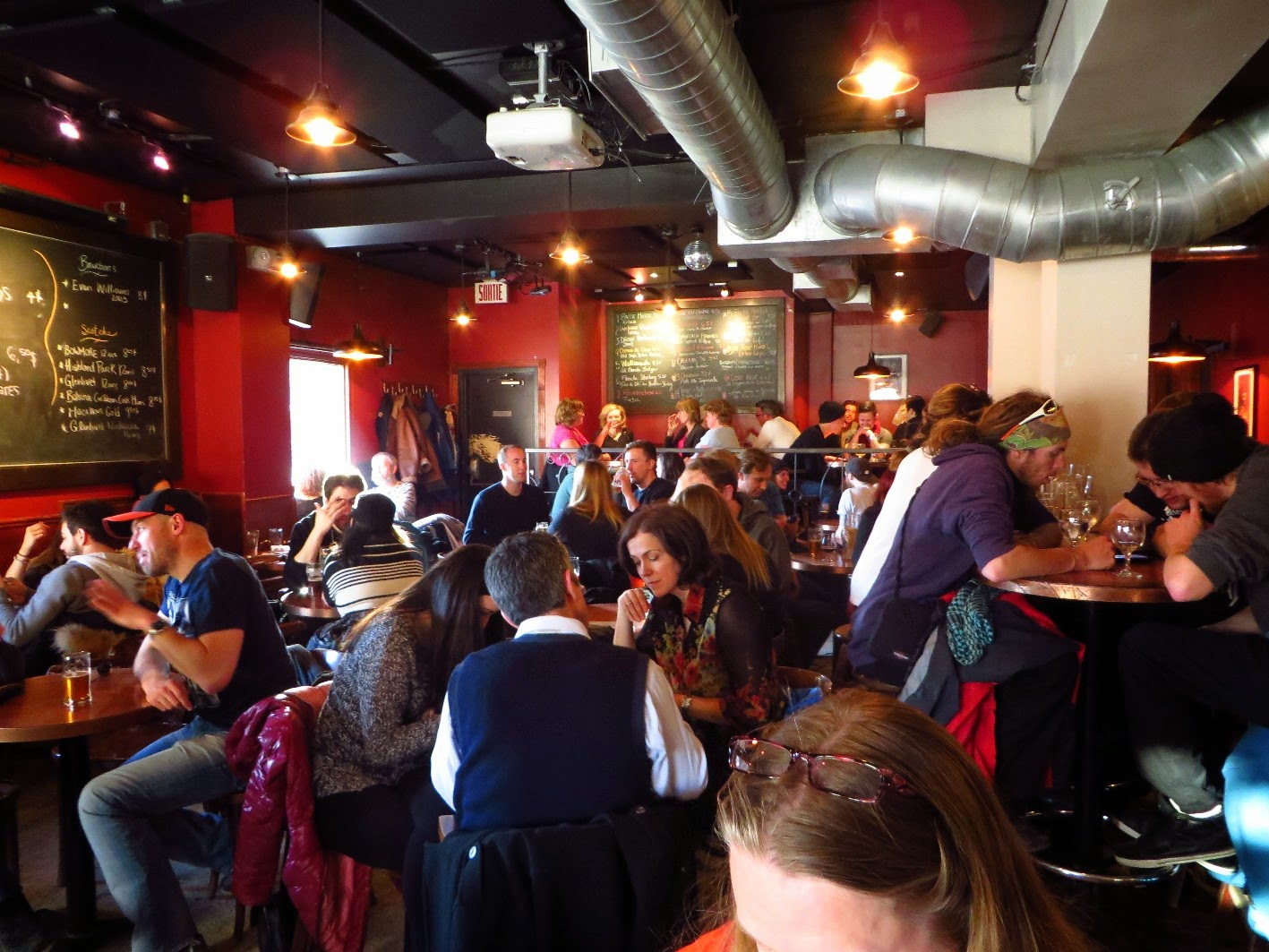 I started with a familiar 5% ESB called Voyageur Des Brumes. It was brownish with a nice off white head and was very true to the English Bitter style ale. It not only quenched my powerful thirst but was tasty in doing so. It was a little malty to start but the hops came through nicely in the finish. This is a very good session ale, one I would order again. I wandered over to the glassed in brew house 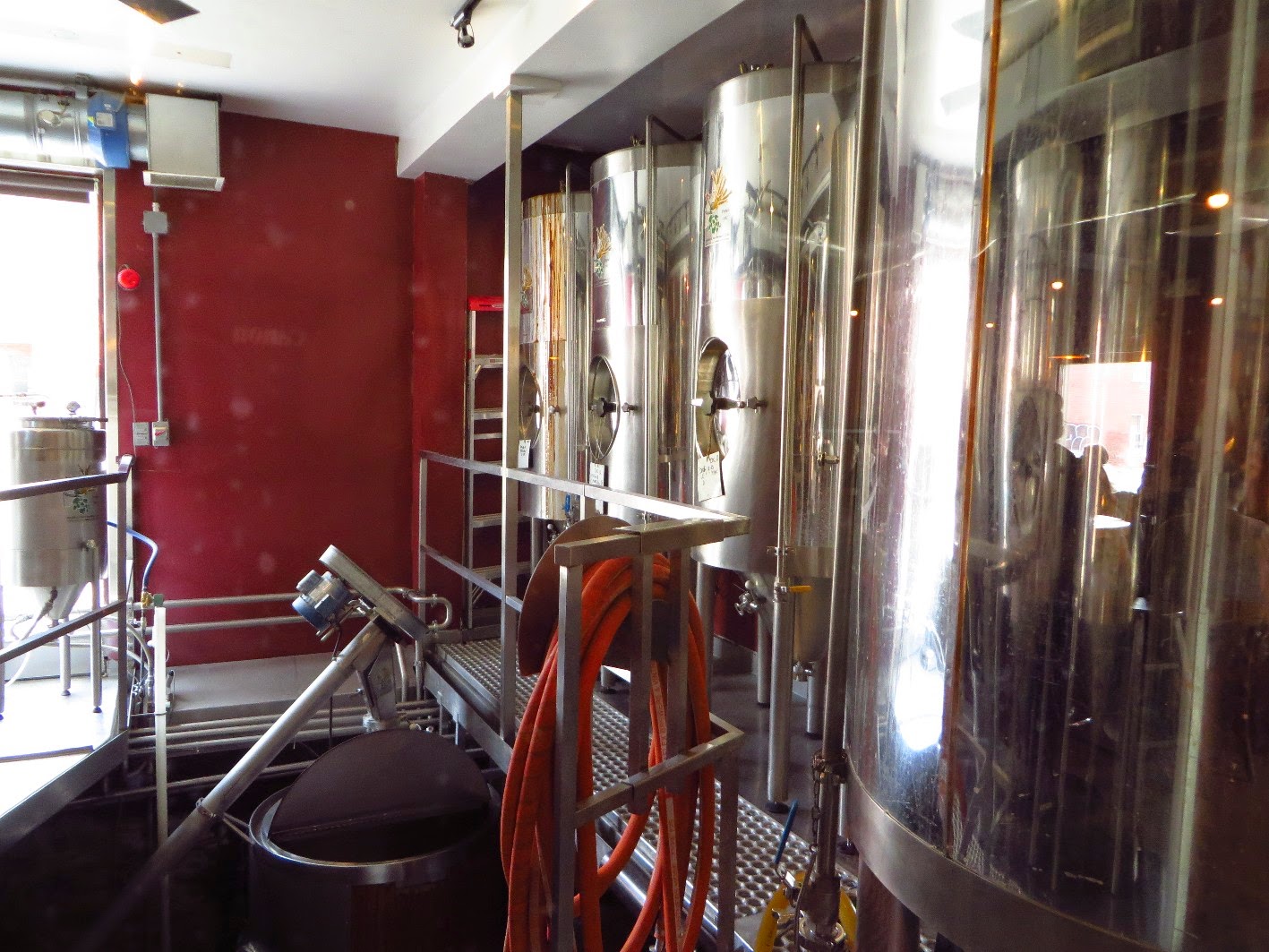 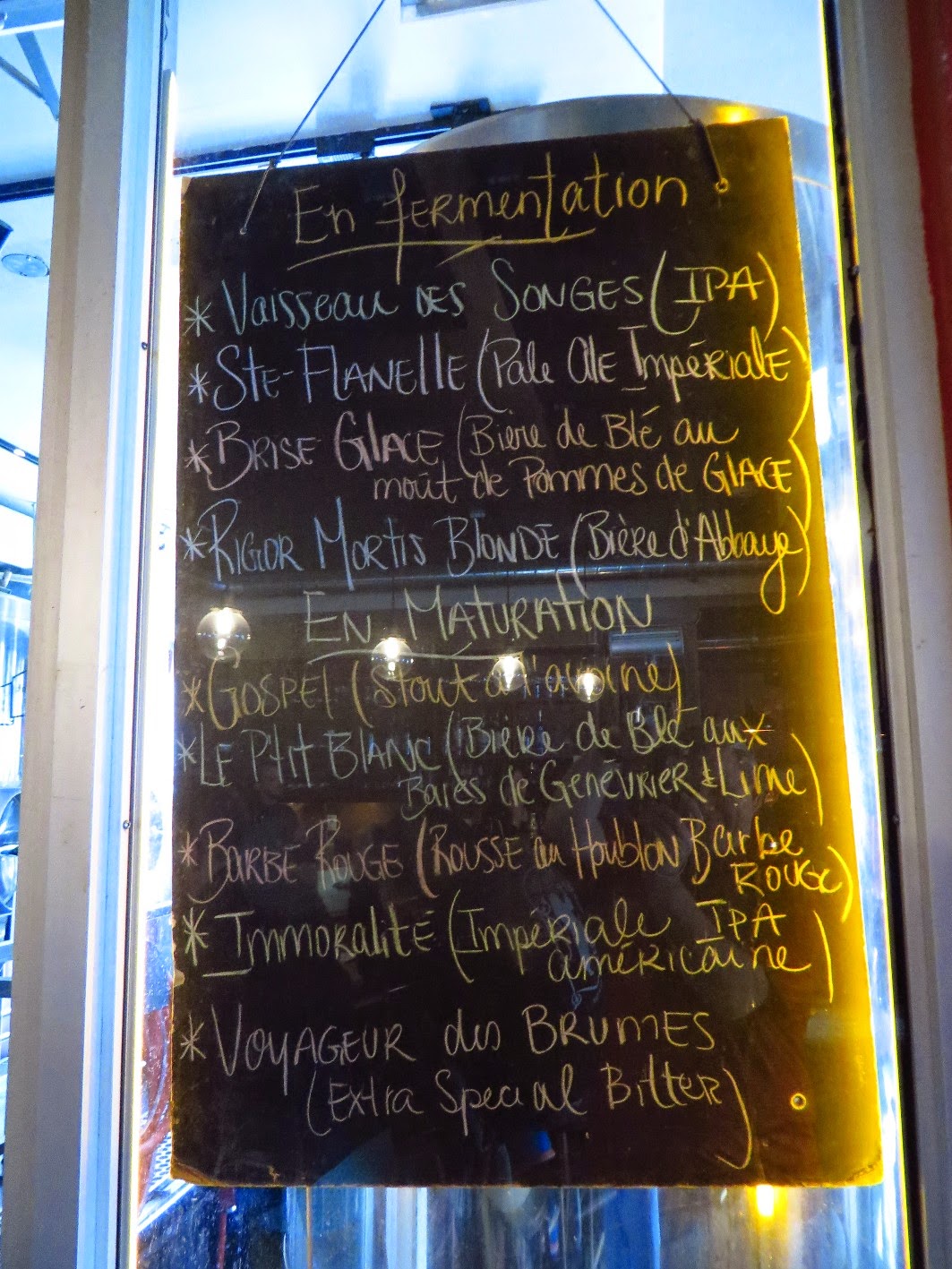 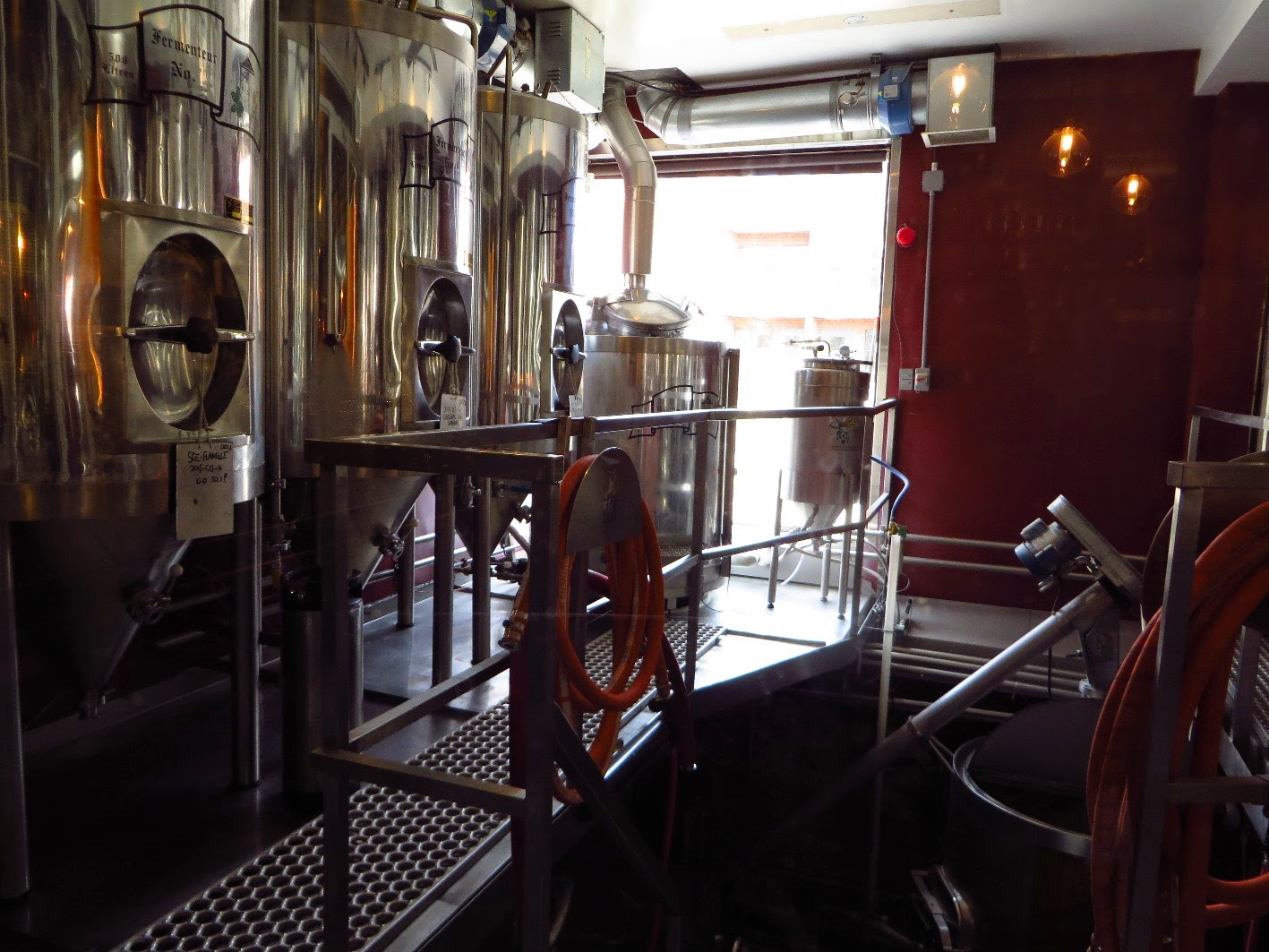 Next up was the Blanche Sterling, an excellent wheat beer (this beer is the top picture in this post). It was a cloudy golden colour and with the bubbles continually rising. It almost looked like a cloudy champagne. Most wheat beers come through with a strong banana taste which is a result of the yeast, but the banana was toned down in this, as the beer had a hint of spice and citrus. I really enjoyed this, 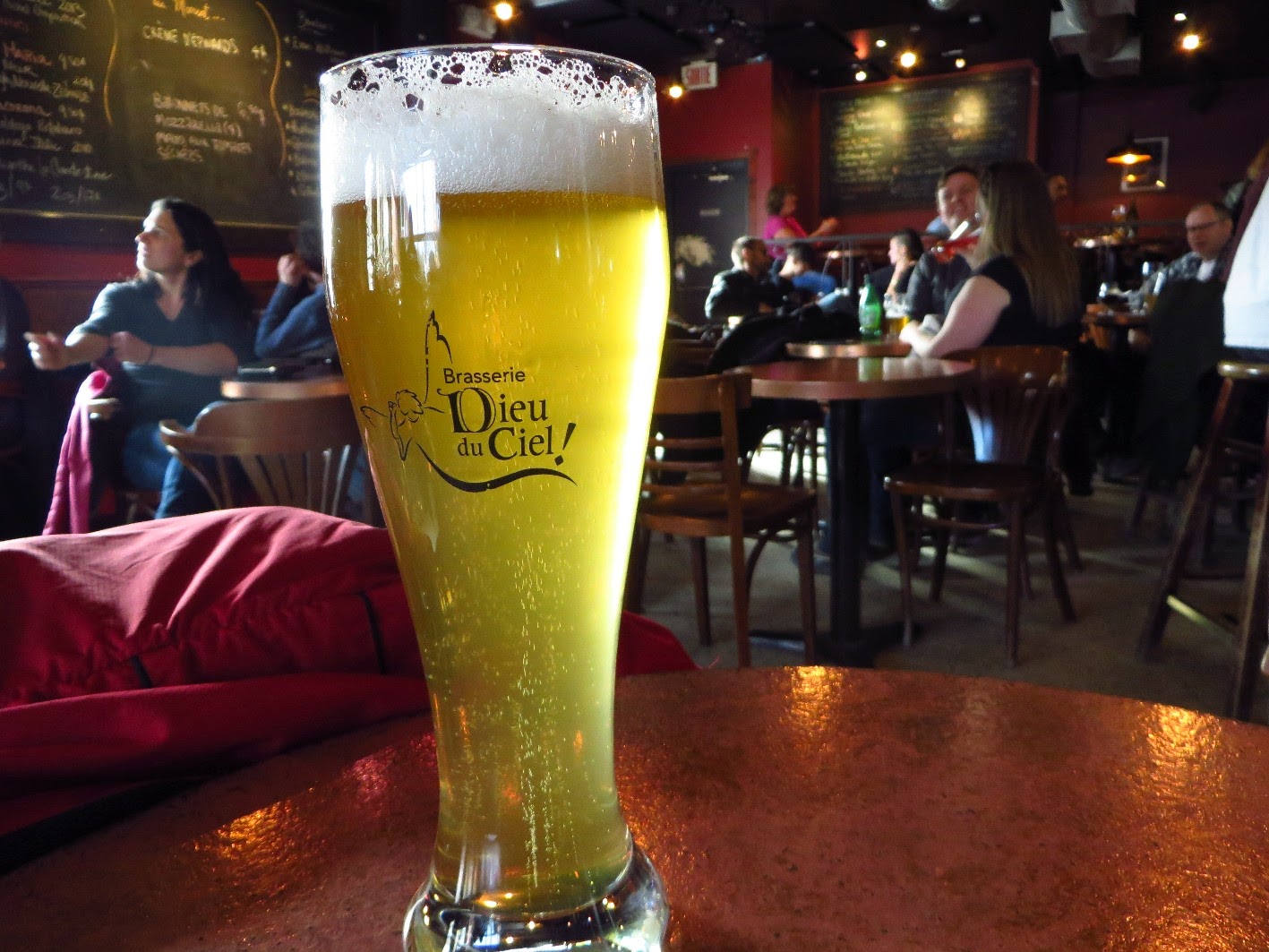 Teena and I were joking around that "Peche" meant "fish" and how the pub had so many fish beers. Actually it means the more obvious "peach" and next up for me was a 6.1% Peche Veniel (Veniel means Venial in English, which is a forgivable sin), a peach coffee stout.

This too was very nice and I found that although I could not sense the peach, it obviously took the edge off the coffee and dark chocolate, that can occur in a stout. I quite enjoyed it. 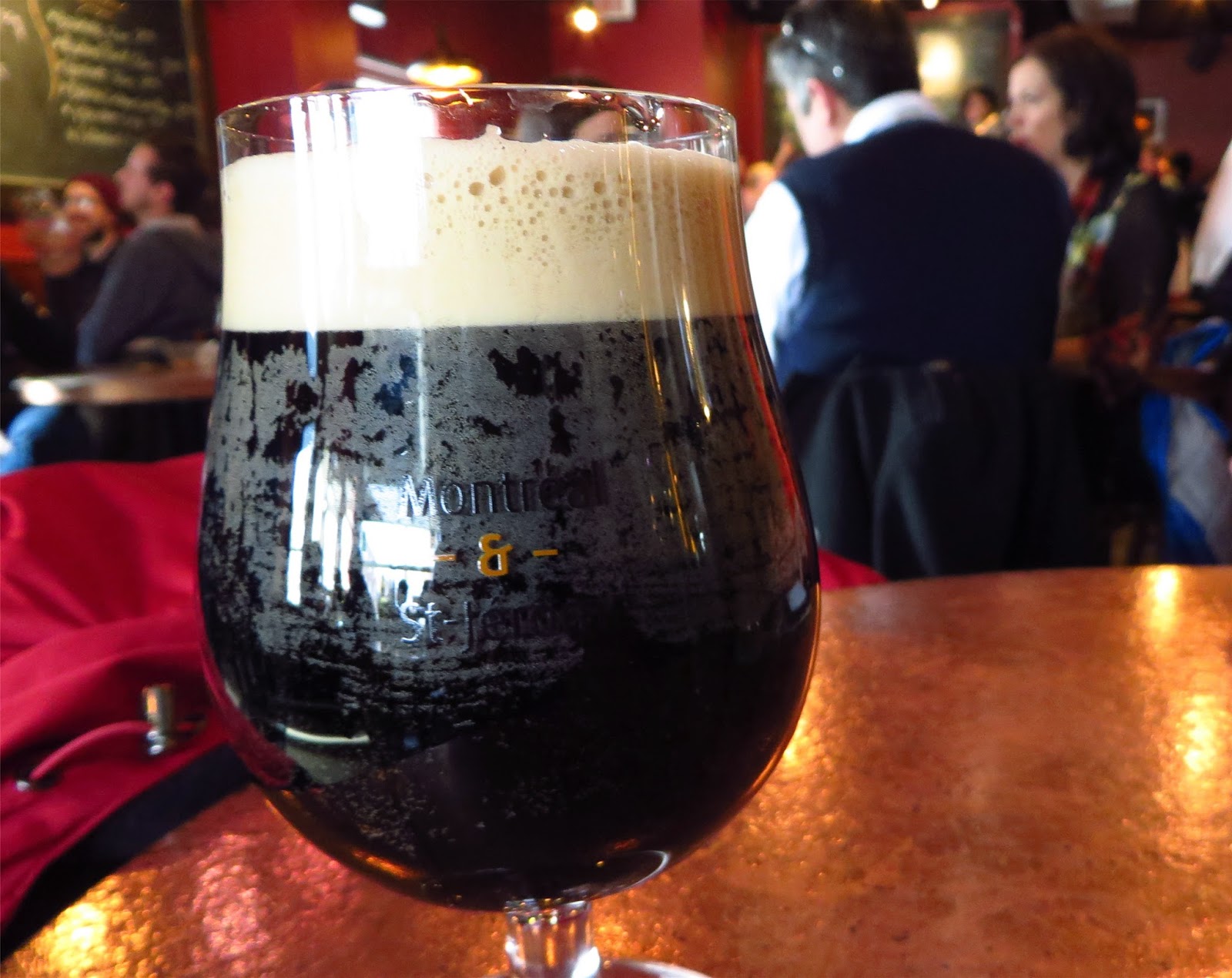 Finally, I could not leave without having an IPA. There were two 6.5% American style IPAs on the board but Nadège, our server recommended the Corne du Diable. Great recommendation! All kinds of citrusy American hops invade my flavour buds from this brew. I wanted some to take home but they don't sell bottles out of the store. 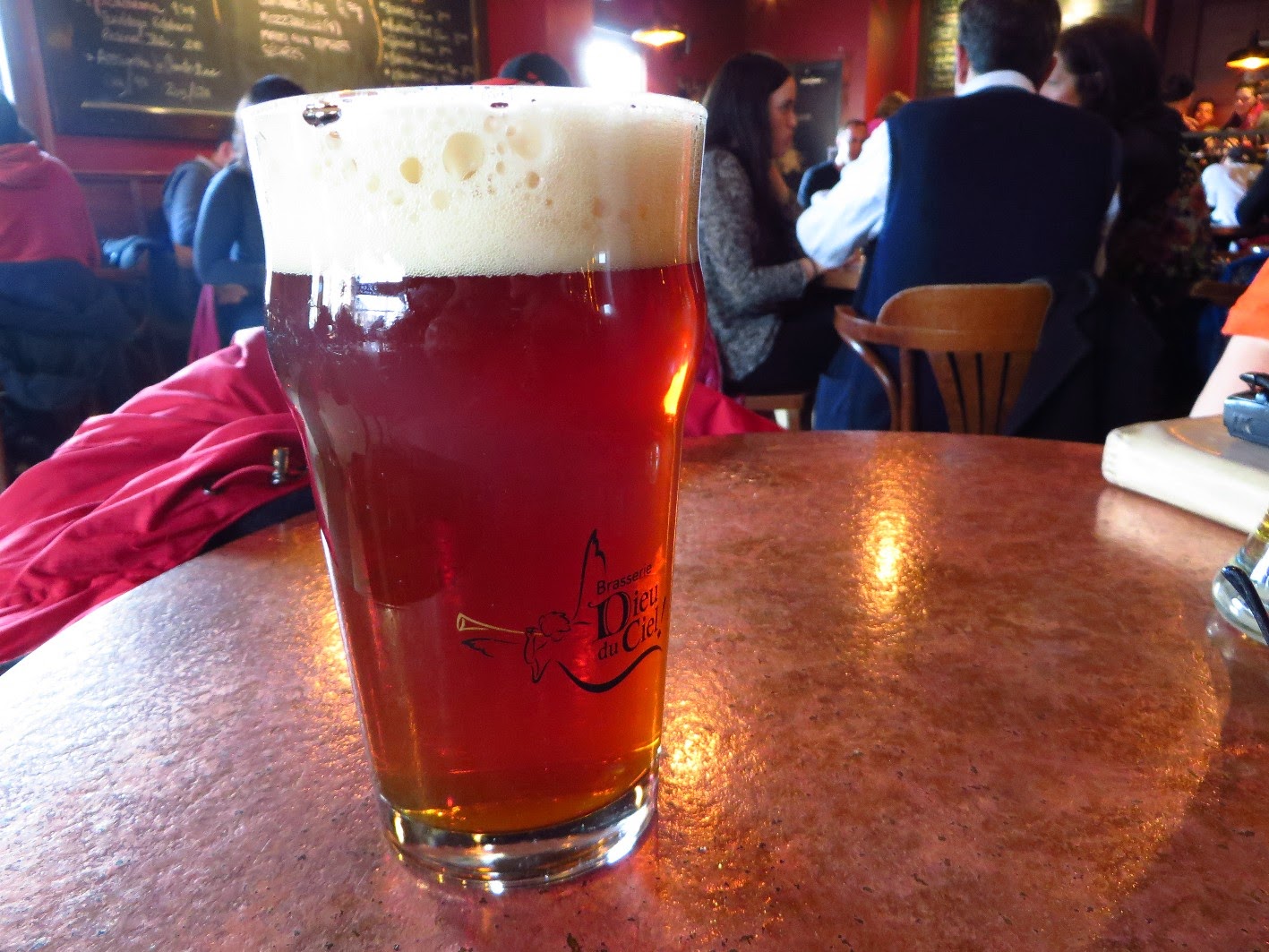 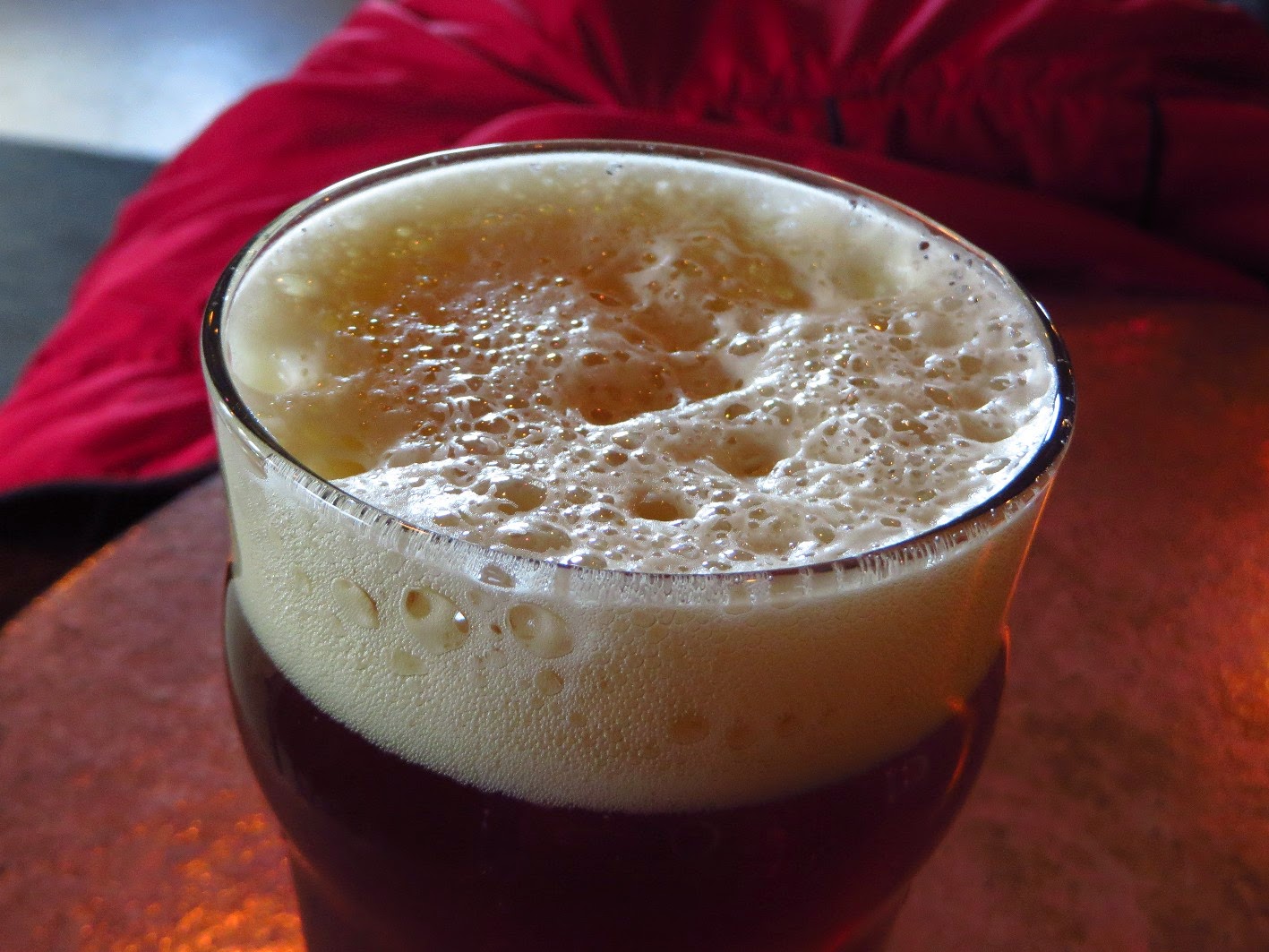 Having this IPA was an excellent way to finish our stay. If I'm ever back in Montreal, I will definitely be stopping back in here. I can't picture coming to this city and not dropping in. The beer and the pub are that good! 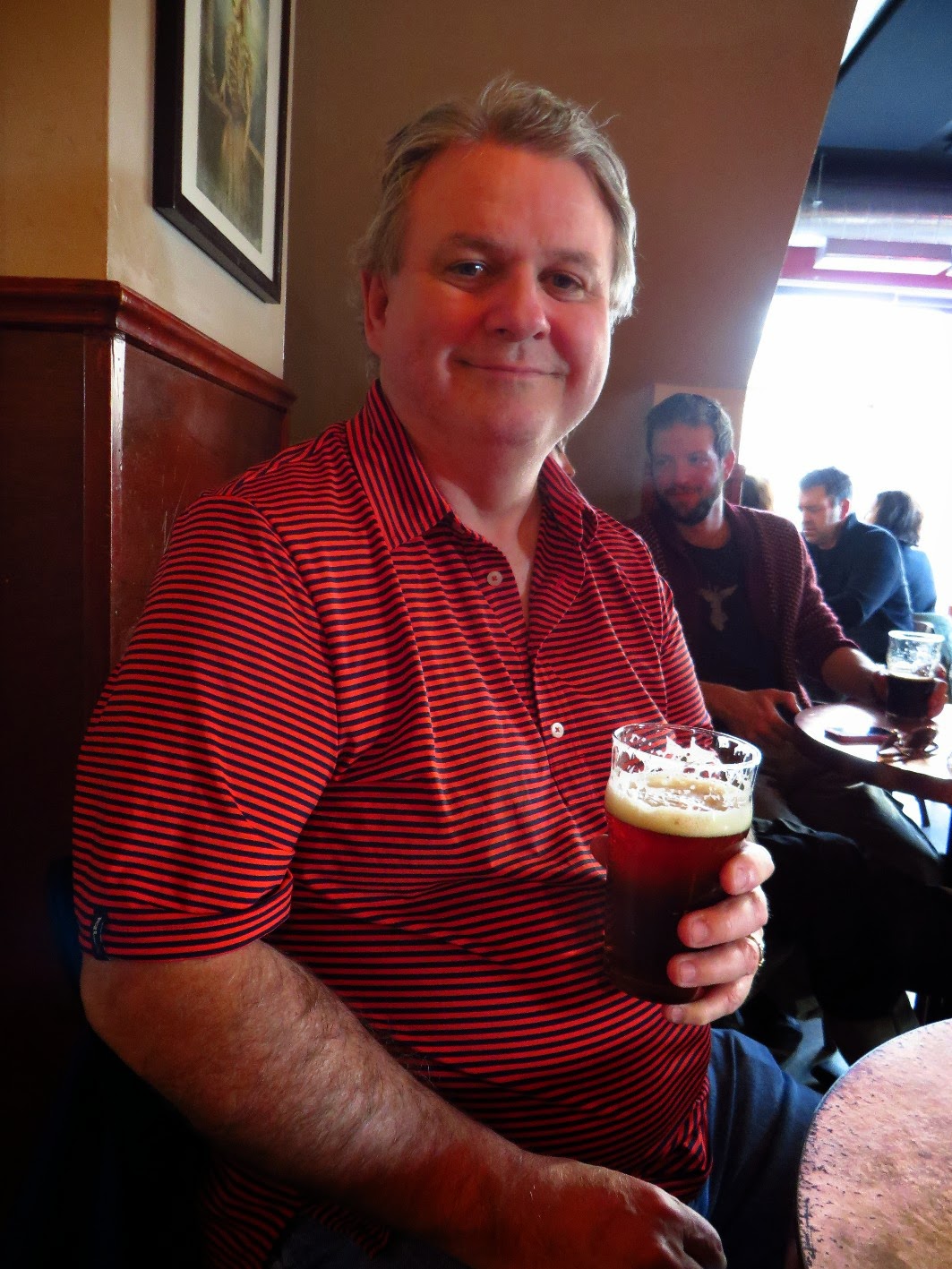 haha, you did not have a peach beer. Péché translates to Sin, not peach. pêche is peach, its all in the accents. Cheers!

Thanks Bud. I never used the accents when I put it in the Free On-line Translator. Really does make a difference. No wonder I failed grade nine French.