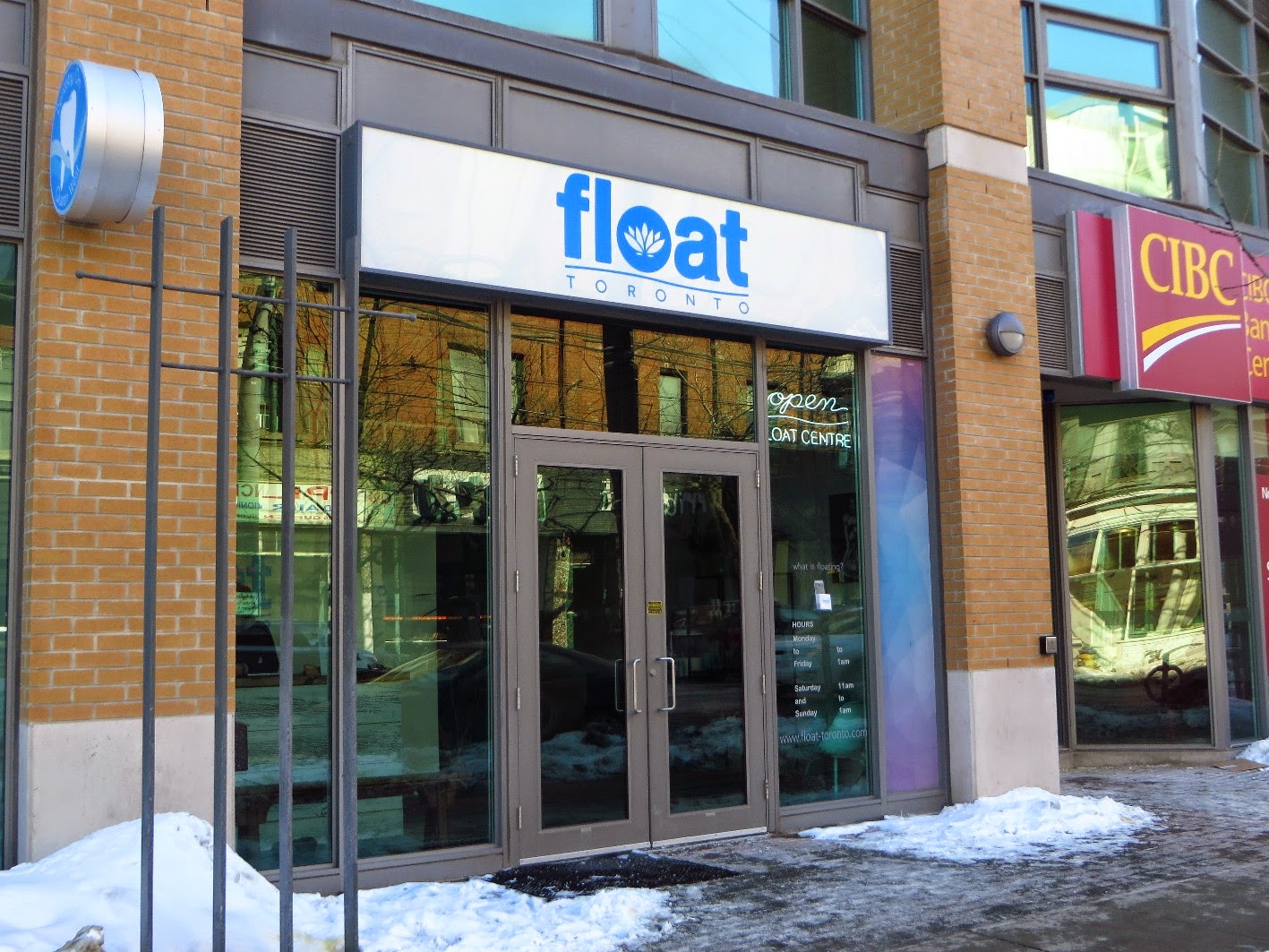 Last weekend Teena went for a walk around the neighborhood and discovered a place called Float Toronto on Queen St West by Gladstone. So what is floating?

Floatation therapy, also known as floating, floatation, sensory deprivation, or R.E.S.T (Restricted Environmental Stimulation Therapy) involves lying in a salt-water solution in a spacious tank. It is one of the most effective means of stress relief and relaxation available. Now widely accepted as a legitimate therapy, floatation is also used to treat a wide range of ailments and conditions and has been proven to lower cortisol levels (the stress hormone). The term sensory deprivation is often used as the environment is designed to limit sensory input and allow your body to fully relax. –

Your ears (with earplugs in) stay just below the water; the tanks are insulated against sound leaving you in peaceful silence. After you shut the door and turn off the light, you float in total darkness you won’t notice a difference between keeping your eyes open or closed. (You’re free to keep the door open and the light on until you grow accustomed to this unique environment.) 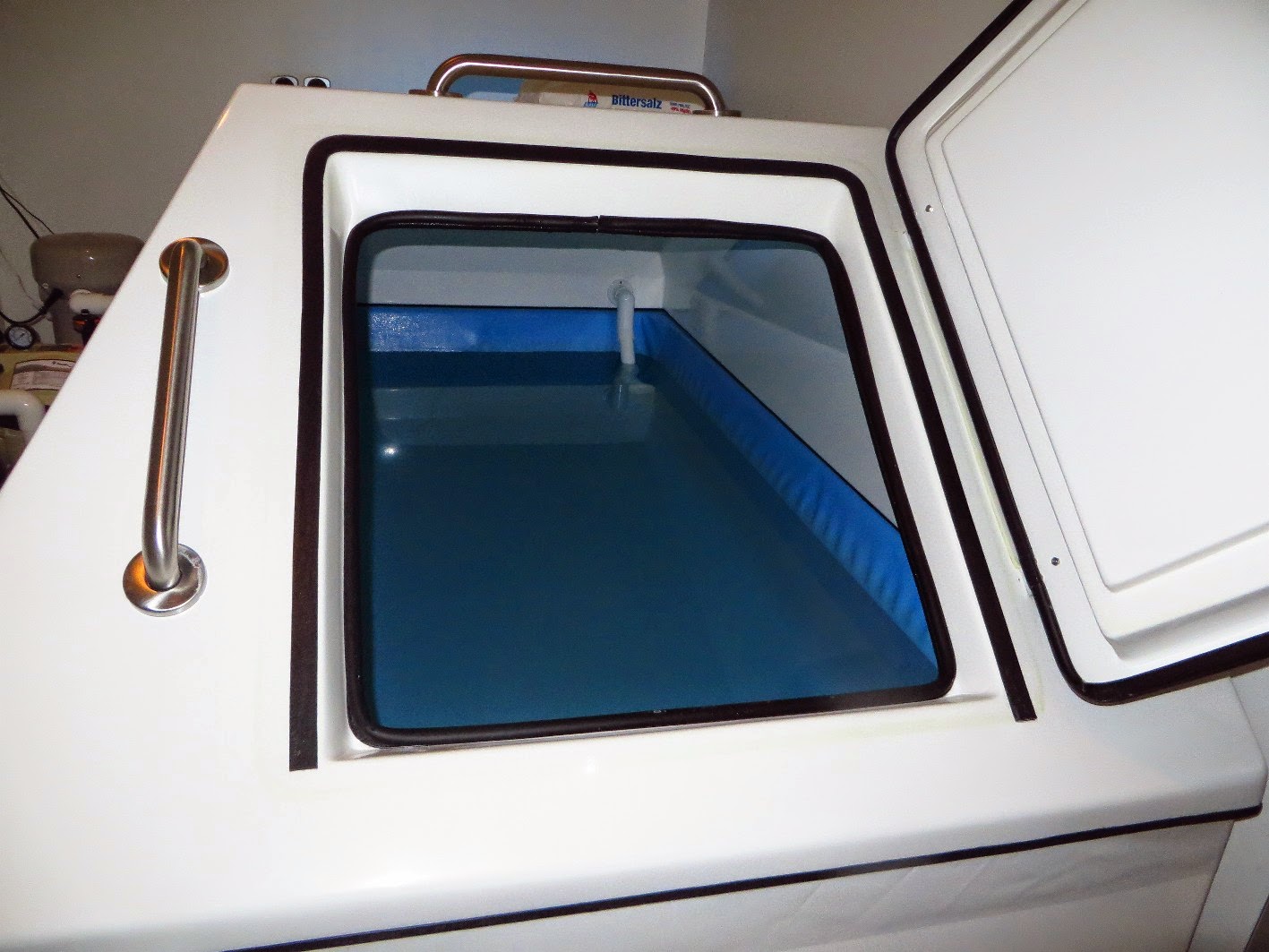 Inside the tank you’ll find 10 inches of water and 900 lbs. of dissolved Epsom salts - a solution that allows you to float effortlessly. The water and air are both kept at 34.1 degrees Celsius - this is skin-receptor neutral, which means that when you fully relax, you lose track of where your body ends and the water or air begins.

Sounds relaxing. Floating is supposed to ease back, neck pain and pain from arthritis. I am hoping for it to help my shoulders. It is also supposed to increase blood circulation and floating in a pool of Epsom salts helps to draw out toxins and lactic acid buildup in the body.

Teena and I arrived a few minutes early. Misha showed us around and described the process. She was very helpful. 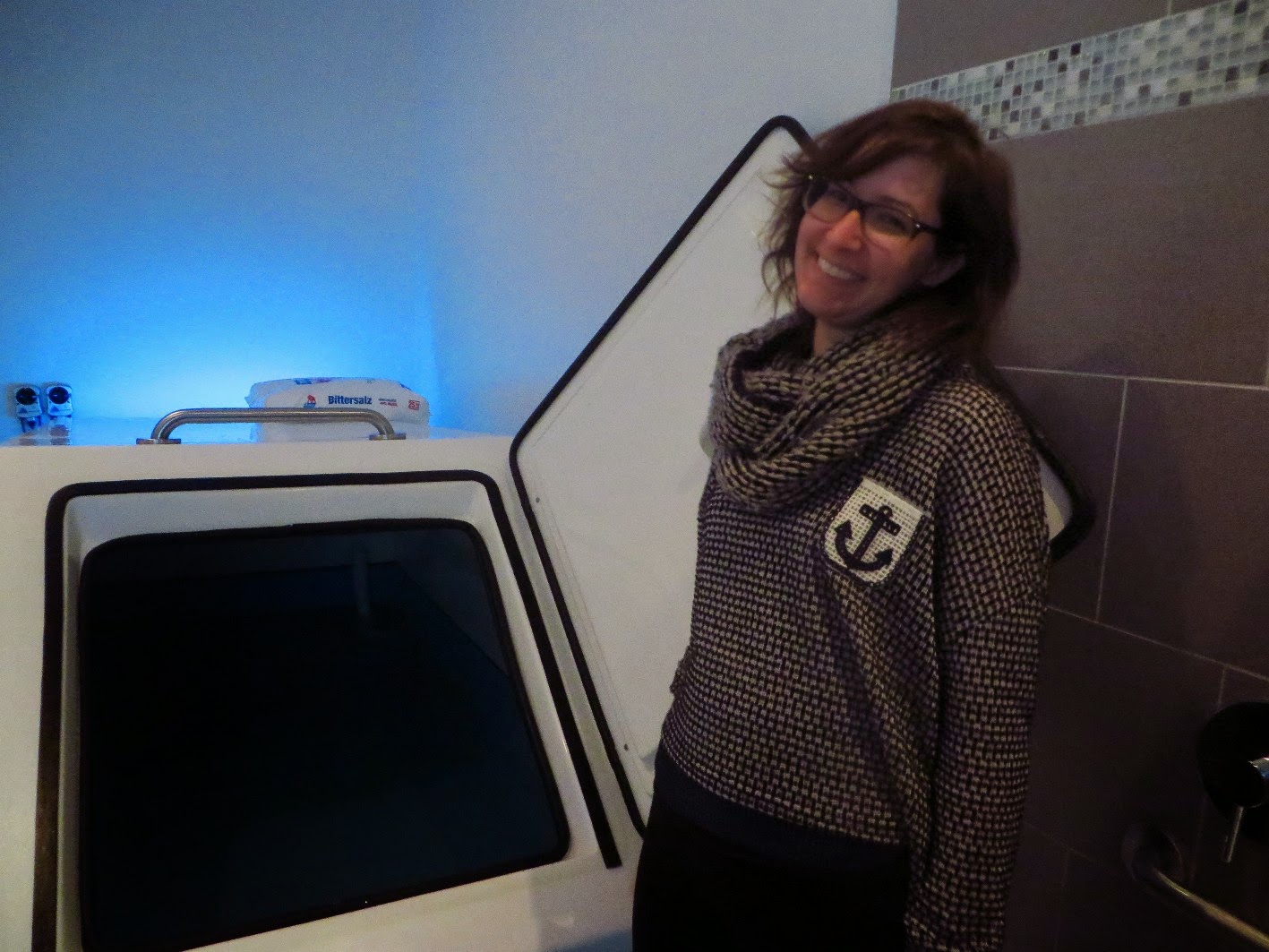 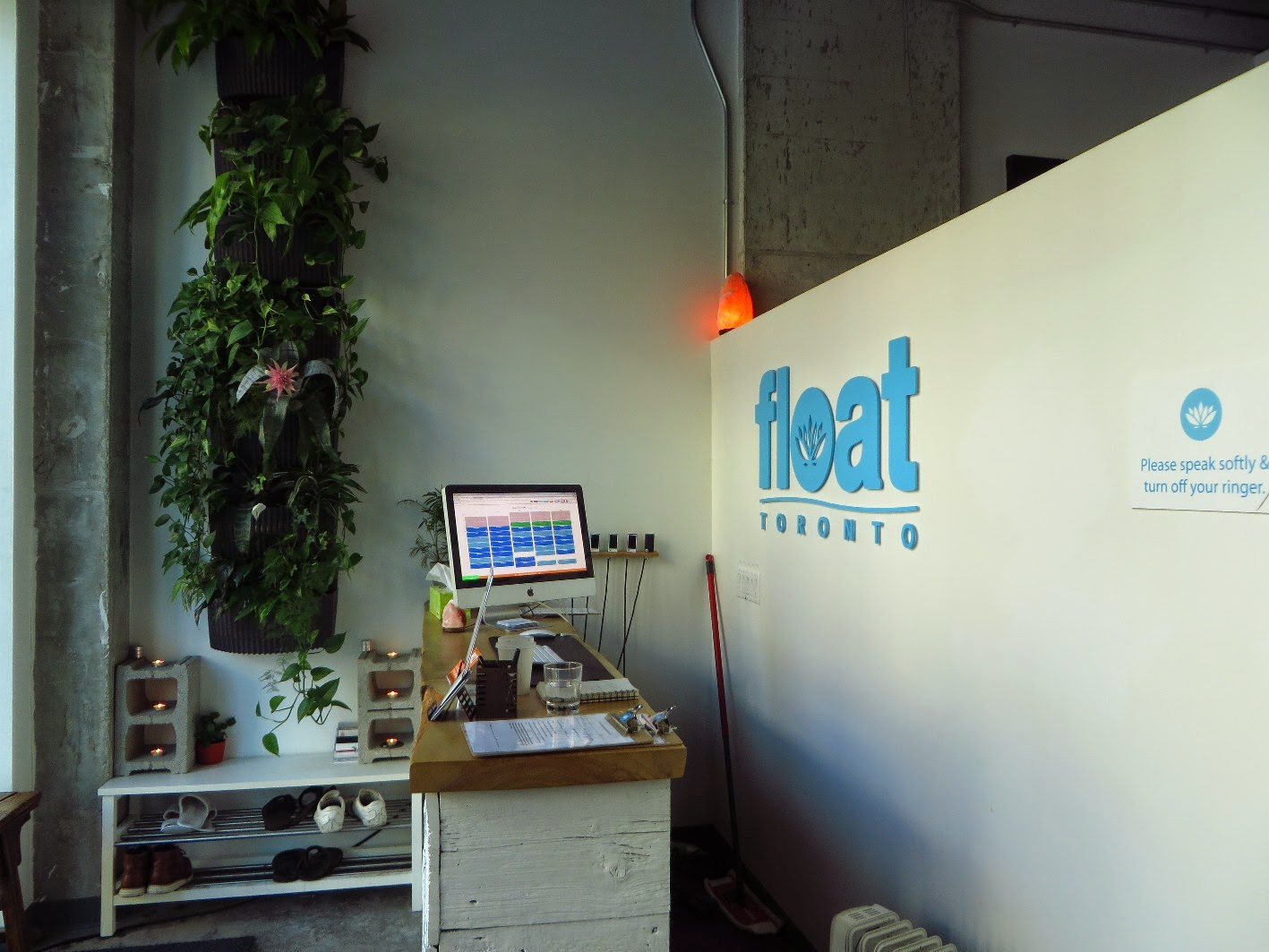 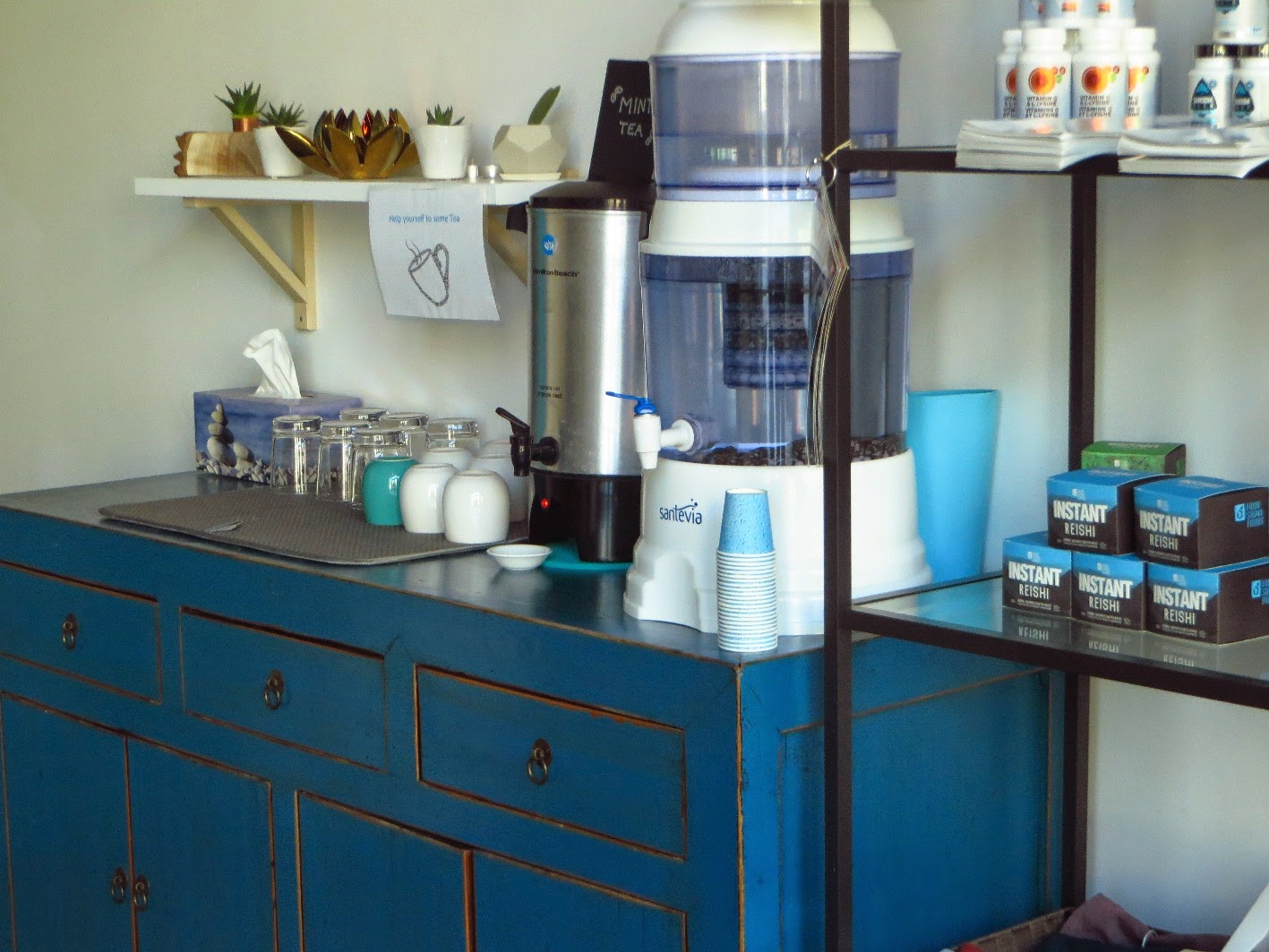 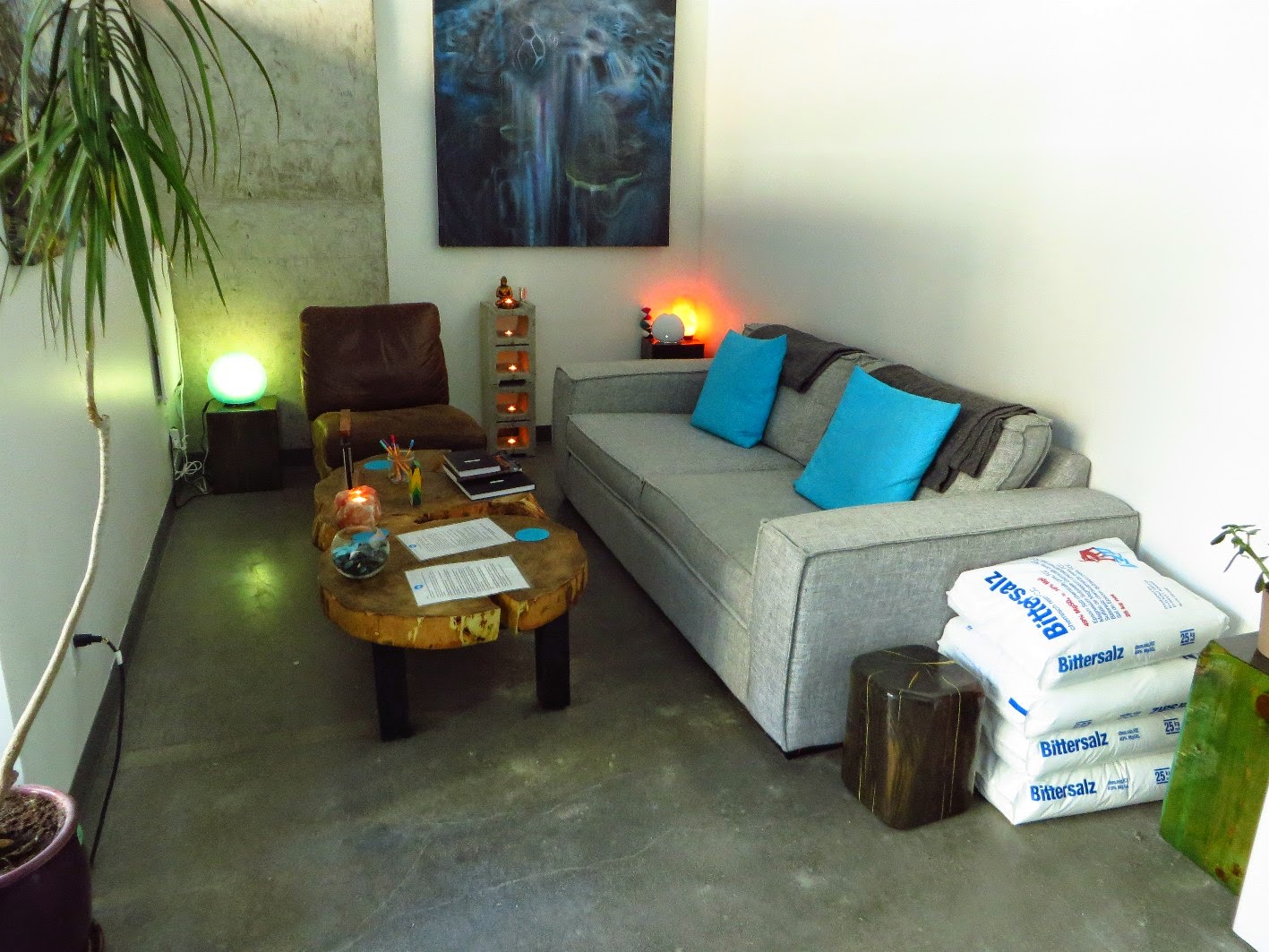 Yes, bags of salt are set out for ambiance and it works. 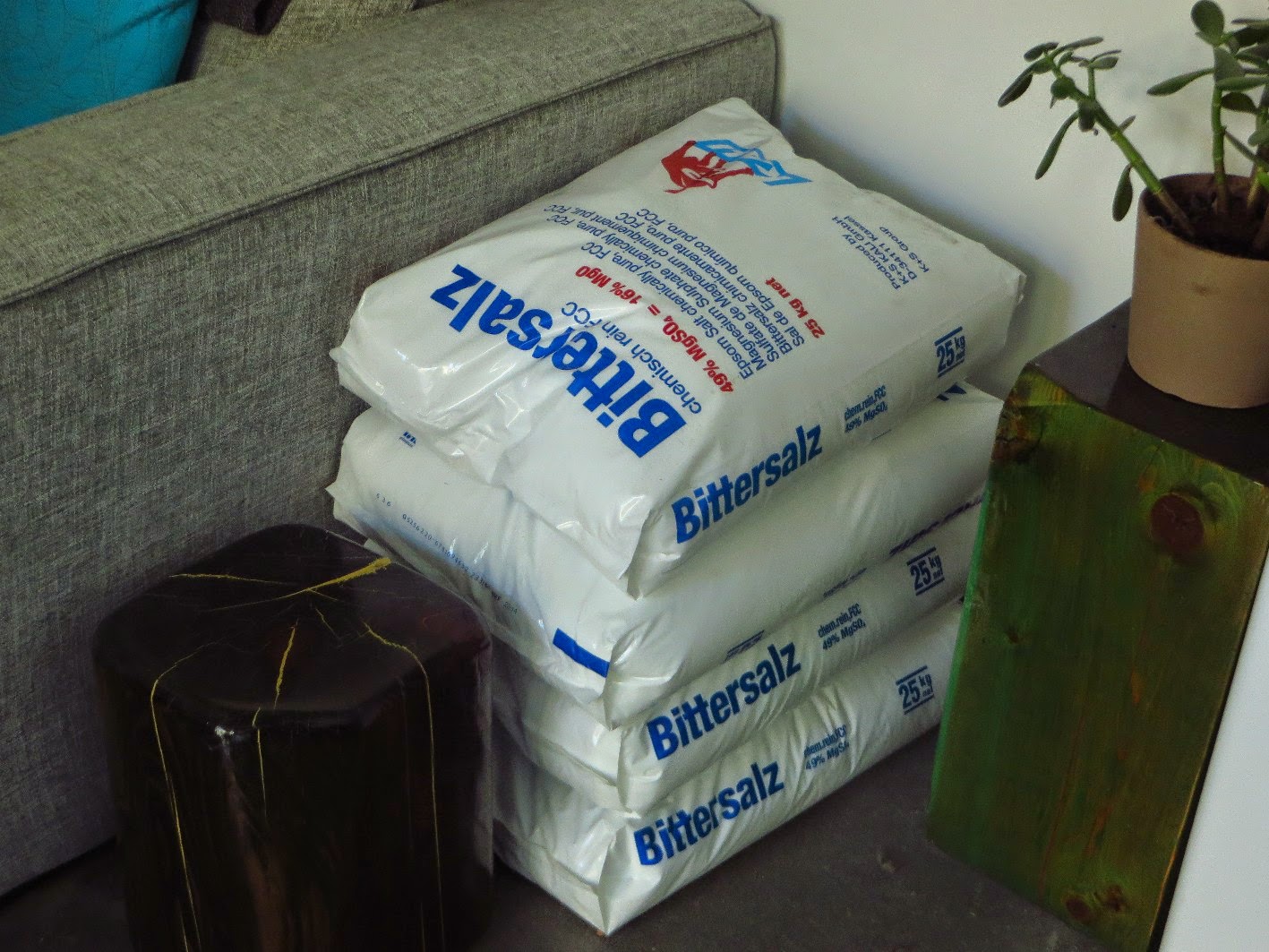 My room, complete with a shower which you use before going into the tank and again when you get out. When the session is over and you are out of the tank, the filter to the left kicks on and filters, and reheats the water. 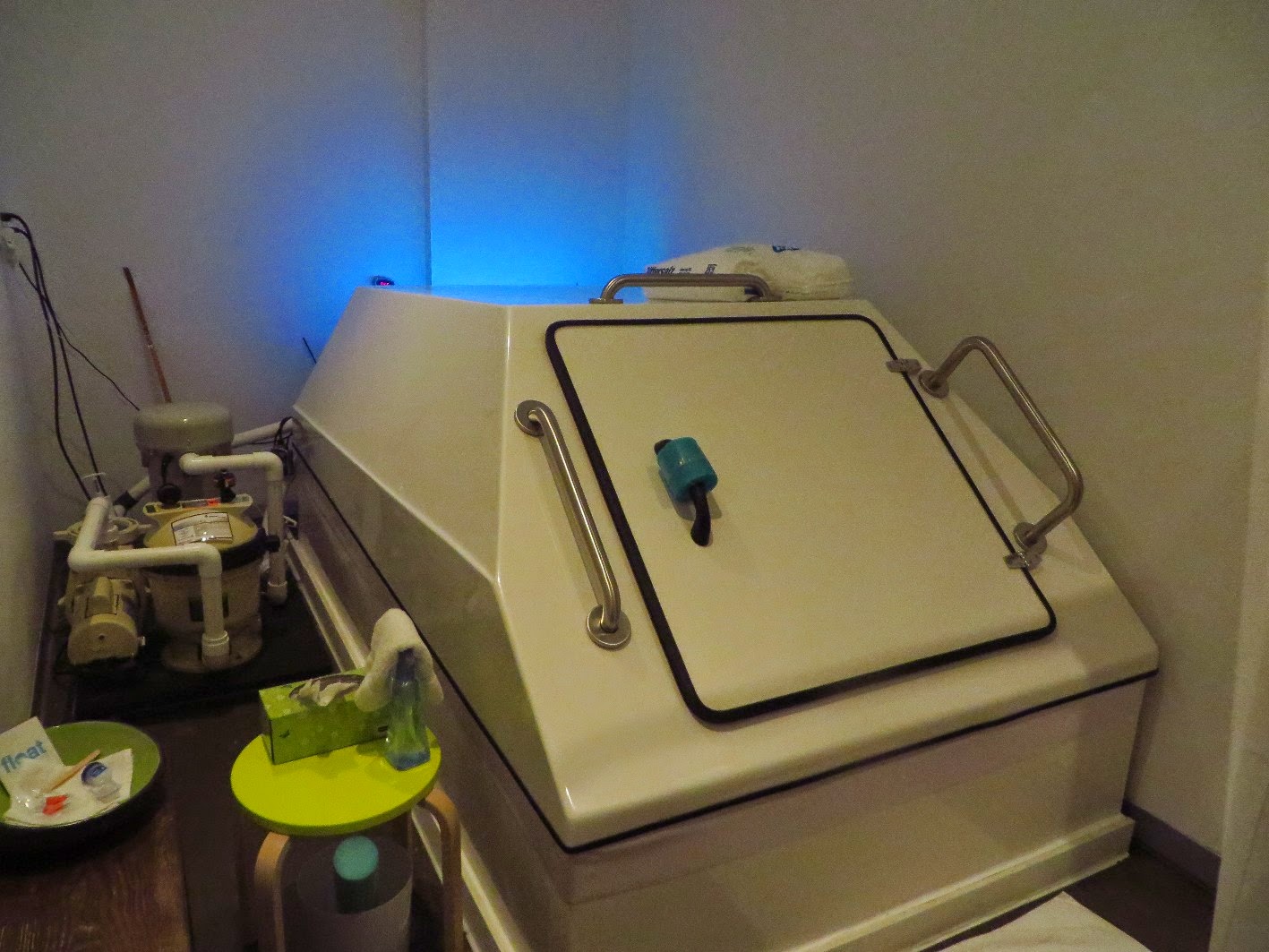 Earplugs are important as you ears are submerged. There is an ear flush available for after the float. 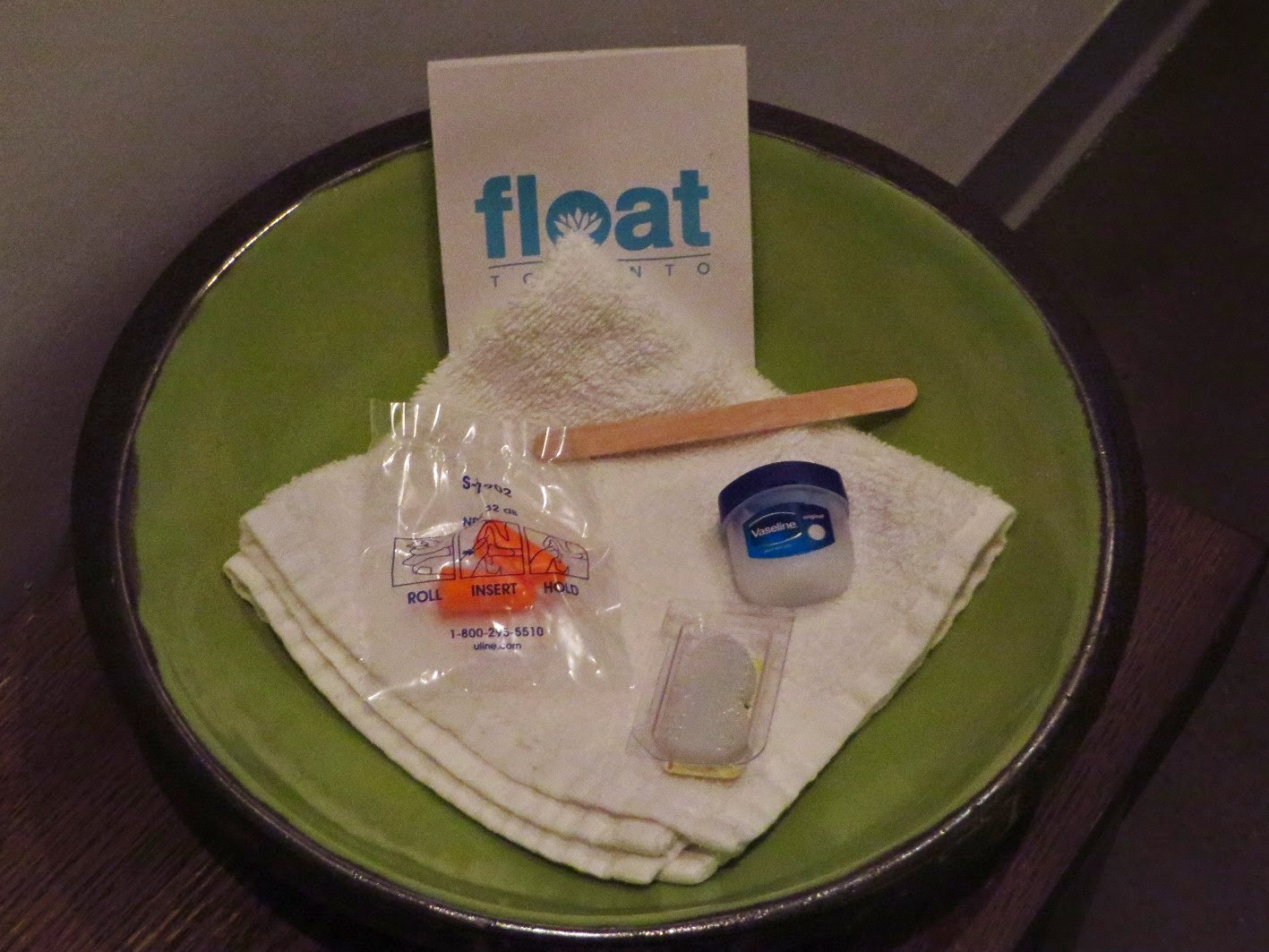 The sensation is quite interesting. I spent the first fifteen minutes just discovering what I was feeling. The water and air are the same temperature and except for my hands, I had very little idea of where the water ended and the air started. It was a weird sensation at first, just floating without any assistance.

I could hear/feel my heartbeat for the first few minutes, which is something I have rarely experienced. I was quite aware of the sound of my breathing.

Being suspended like that was wonderful. It was much like space would be like. Every action caused a reaction and if I gently moved an arm or leg, the motion would send me slowly over to the other side of the 8 x 4 tank where I would gently bump the side.

After the first fifteen minutes, I just relaxed and enjoyed. I believe I drifted off to sleep a couple of times, as I had some of the same kind of dreams as when I sleep.

Whether my eyes were open or closed, this is what I saw. 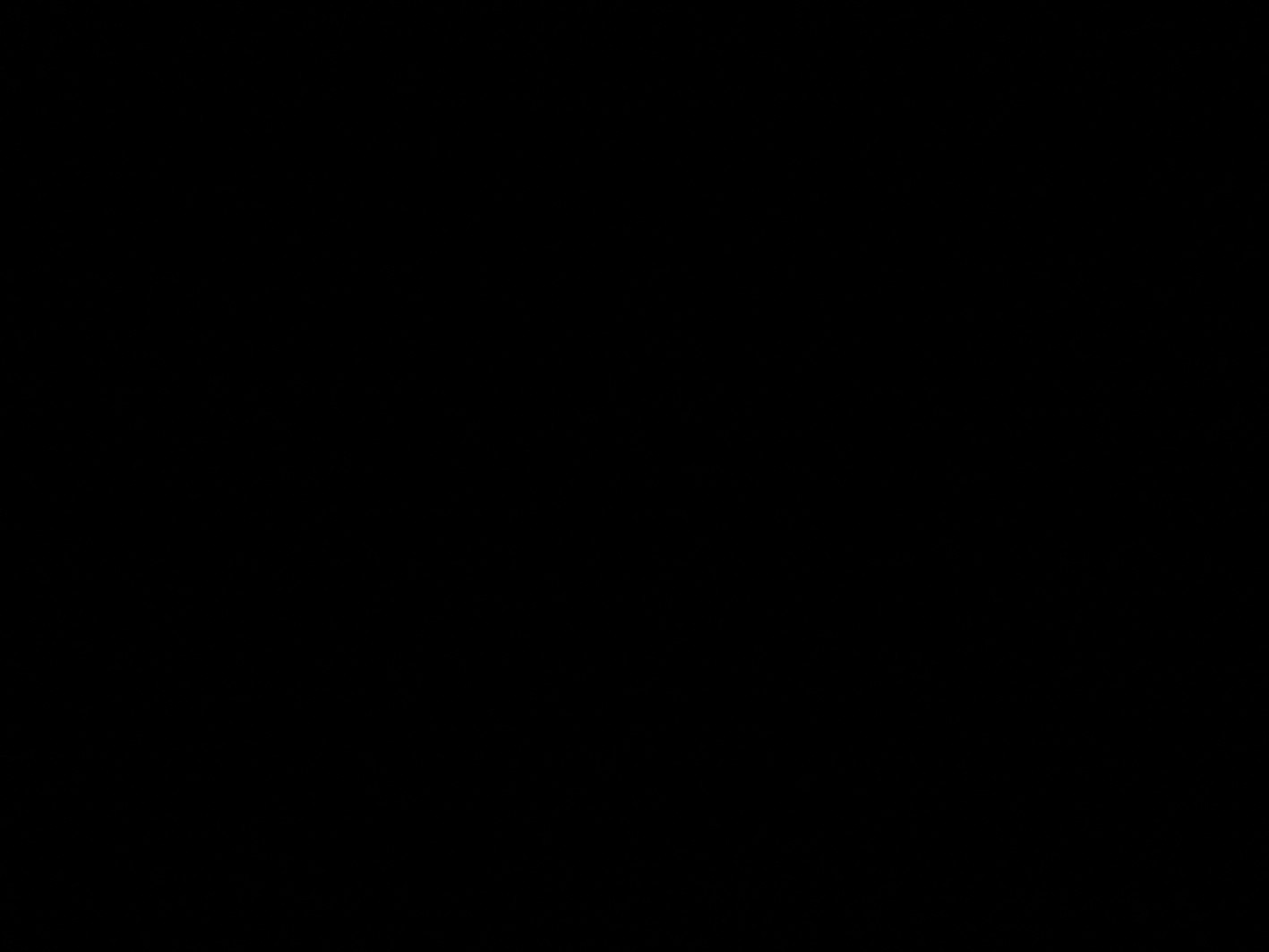 When the hour is up, music is gently piped in. I must have been asleep as although I had been told before getting in that this would happen, I was confused by the sound and then came to realize where I was.

So, how did I feel afterwards?

Very relaxed, both in mind and body. My muscles were soothed as if I had just had a massage but without the lingering pain. For a body that had just spent an hour floating and doing nothing, I was also starving, even though I had a light breakfast an hour before. Teena was too so we hit the Gladstone Hotel for brunch.

Not only would Teena and I both do it again but we've already bought a three pack pass each.
Posted by Swordsman at 13:30