Book Review - "33 Men, Inside the Miraculous Survival and Dramatic Rescue of the Chilean Miners" 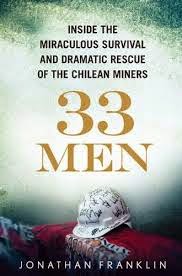 I remember in 2010 sitting on my couch in the safety and comfort of my home and watching the rescue of 33 miners in Chile being hauled out of a ground in a capsule, one by one from a mine after being trapped for 69 days underground after the mine collapsed. It was an engrossing story that I really got caught up in. When it comes to miracles, the rescue of these men certainly was one.

33 Men tells the story of the trapped miners, their families that waited, and the rescue efforts being made above.

On the morning of August 5, 2010, thirty-three men gathered at the entrance to the San Jose copper mine outside Copiapo, Chile, for a twelve hour shift.

At approximately 11:30 a.m., the earth cracked sharply: two and a half hours later there was a massive thud unlike any the men had heard before. A giant section of the mine had collapsed. Thirty-three men scrambled for refuge inside the mine and headed for the safety shelter – a 540 square foot room stocked with enough food and liquid to last a group of ten men forty-eight hours.

Their nightmare had begun.

For the next seventeen days, engineers drilled and families prayed, with dimming hopes for the men’s survival. And then on August 22, at 5:50 a.m., a drill bit pierced the tunnel near the miners safety shelter. It came back up with a note attached to the tip – “Estamos bien en el refugio los 33” – We are all right in the shelter, the 33 of us. 33 men is the story of the miraculous survival and rescue of all thirty-three miners who for sixty-nine days lived inside the collapsed mine.

The author, Jonathan Franklin, did an excellent job in telling the story. He was a transplanted American who had lived in Chile since 1994, married a Chilean woman and had six kids. Franklin was a well known journalist reporting stories world-wide from Chile, and when this disaster occurred, was the only reporter who was allowed into the rescue area and had access to speak to the miners below.

Even though everyone knows that the miners were finally rescued, Franklin provides the drama, and insight of living the horror. I cannot imagine being trapped for seventeen days and not knowing if you would be found, let alone rescued, and forced to face a long lingering death by starvation.

Of the thirty-three men, the book tells the story of only a few individuals and then the story of the group as a whole. It is all interesting.

The story also provides a lot of faith in mankind. The men were trapped with very little food, not knowing if they would be found, yet managed to keep an orderly democratic society underground. Sure there were tense moments and times there were some fractures, but overall, every decision was voted upon and nobody was ever accused of stealing what limited food they had. I found their story inspiring.

I found it easy to hate the owners and operators of the mines. When the cave-in happened, miners were told they could not use the landlines in the offices to call for help. The company never informed the families of the miners and as the rescuers came in from all over the world, company officials just packed up their offices and left. Damn them to hell!

The book was written soon after the rescue so the reader never finds out about the life of the thirty-three past a few days after they came out of their hell, nor do we know what happened to the company and the officials onsite the day of the cave-in.

This is an excellent book with the story being told from many angles. I highly recommend it.